Just checked the local updates for those of you who have shown interest in the volcano. Yes, the volcano is still dancing. Since my last update there has been about 200 small earthquakes along the rift, indicating magma moving below ground. Some of the residents over there are reporting that they are feeling some of the quakes. So far there has been no sightings of ground cracks, visual gas emissions, nor lava. Tilt meters are still showing ground deformation, but at a slower rate. So perhaps the activity is slowing down.
Below, here's the photo I posted yesterday showing the earthquake activity, the red indicates quakes within two hours, the orange are knee in the past two days. 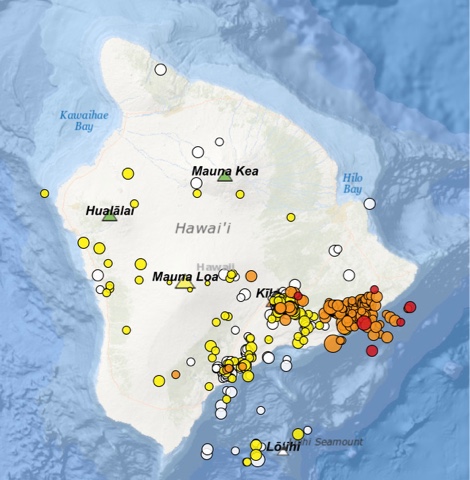 Below, this photo I grabbed off the HVO website this morning. There is still a lot of new earthquakes and the main focal point has changed. Gee, it's almost like watching the magma itself moving along. Neat to follow - but a bit scary if you're living above it. But that's the risk one has to accept if one chooses the buy land or a house in that area, 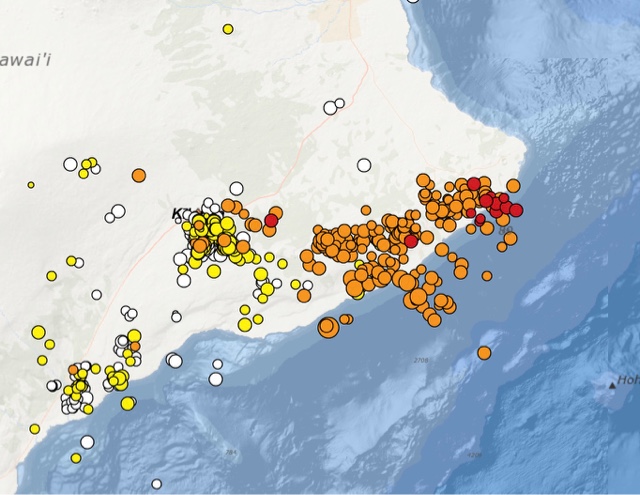 So far the only new lava that the geologists has located is up at the Pu'u O'o vent itself. A new 1/2 mile long crack along with a little lava was found right near the vent. Other than that, there is no surface indication of a new breakout.
Sometime later this morning there will be new updates. If there is anything interesting, I'll let you know.
Posted by Su Ba at 9:32 AM