With the daily ashfalls, we had to prioritize getting a way to divert the rainwater from entering our catchment tanks. On the outbuildings, we had installed the raingutters ourselves for the barn and Adam's cabin, so the system already has clean out drains in place. Simply opening the drain would stop the water from entering the catchment tanks. But the house system was installed by a gutter company, and guess what......only one drain that serviced 1/2 of one of two rooves. What the heck? Yeah, poor job. We noticed the problem too late. The company had flown the coop, so we were stuck with it. Since other things always seemed more important to take care of first, we never got around to modifying the rainwater system at the house.
Now it was urgent that we tackle this problem. So David and I walked around the house surveying the situation. We concluded that two more drain/clean outs were needed so that all the rainwater could be diverted.  Although it would be a little difficult working in tight spaces, the job was do-able.
Next problem. No one here seems to sell a clean out or even a valve for the size pipe that we have. The gutter guy used 3" pipe. Personally I would have used 4" pipe because we sometimes get torrential rains. The 3" pipe is undersized. But since those types of rains seldom happen ( it's  only happened twice since we moved here), I'm not going to replace all the piping. It's a lot of pipe.
So David had to finagle a clean out drain. He took a 3" T and stepped up to a 4" clean out plug. It took a few pieces. It might look awkward, but it works. 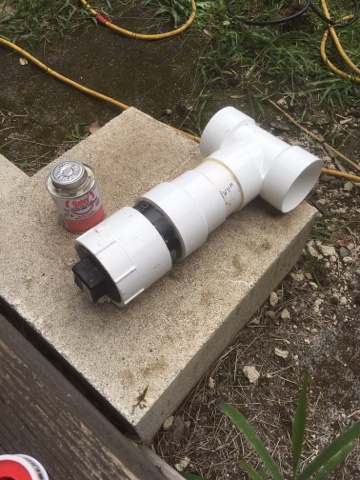 He made two, then set about installing them. Installing was the easy part. Using a sawsall, he cut the pipe, fitted the new drain, and ....wallah! The drains are located at the lowest points in the system, so all the water in the pipes will drain out when the clean out plug is removed. 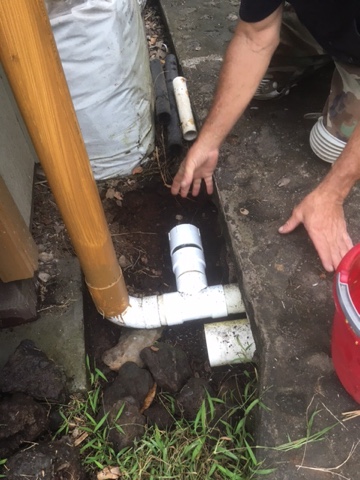 (note- the cut off pipe in the foreground is simply an underpass for the concrete walkway. I installed pipes like these in strategic spots just in case I would want to pass something under the concrete walkway, like a hose, outdoor electrical line, water pipe, etc. That way I wouldn't have to bust up the walkway.)
The drain can be opened whenever we want to divert the rainwater.....or when we want to wash the roof or flush out the pipes. No special ground drain had to be built since the house sits atop rock rubble over top an aa lava flow. When we tested our handiwork, the water instantly disappeared into the rock rubble.
The only difficulty with this system comes when opening the clean out plug. There will be many pounds of forceful water wanting to rush out. So what happens, as you turn the wrench to remove the plug, on that last turn the plug will fly off and a forceful stream of water will gush out. Plug will be nowhere to be seen as it shoots away.p at high speed. To prevent that, I'll screw a short light piece of chain to the center of the plug and attach the other end to a short pipe I'll drive into the ground. So when the plug flies off, it can't escape. The chain will hold it captive. By the way, I use a 4' piece of light chain on the other clean out, which gives me plenty of leeway for unscrewing the plug. I use chain instead of rope because it's less likely to break.
Posted by Su Ba at 12:07 AM

Email ThisBlogThis!Share to TwitterShare to FacebookShare to Pinterest
Labels: House