As predicted, the pause wasn't to last. About noontime, two new fissures opened and lava once again erupted. In addition, cracks in some places are getting significantly wider. No, it's not over yet.
And to add more suspense and worry, the lava in Halema'uma'u has drained to the depth that it has almost disappeared from the camera view. What does that mean? I don't know. 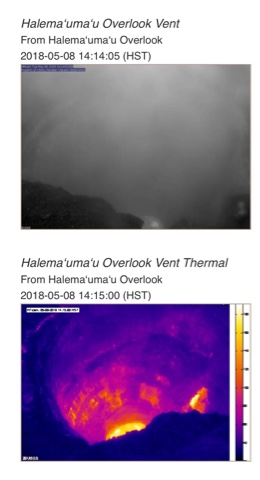 (Photos from USGs website)
SO2 monitors indicate that large volumes of gas is being expelled from the crater. Between this and the eruption site, the air is getting more foul.
The following is for benefit of folks here in Hawaii----
The Volcanoes National Park has posted new hours and accessibility. The park had been shut due to earthquake activity. It has now reopened in a limited fashion. Both the Jagger Museum and the visitor center are open with normal hours. The Jagger overlook is open. Two trails are open -- the sulphur banks trail and the section of trail from the Kilauea overlook to the overlook at Jagger.  There will be car access to Mauna Ulu, and the trail is open to Pu'uhuluhulu. And the Kahuku section of the park is open with normal hours. KMC is open. Volcano House is open. Mauna Loa Road is open to the Mauna Loa Lookout. Kipukapuaulu is open.
Posted by Su Ba at 5:27 PM