Life has been busy lately. One of my emergency projects was fixing the equipment shed.

First a little background. Fifteen years ago we cobbled together a simple open shed for temporary use. We needed a place to stash stuff out of the weather. We had cut down a bunch of ohia trees in order to open up an area for the solar panels, so we had all those poles and opted to use them for the roughly built shelter. We figured on using this shed for 2, perhaps 3 years at most, therefore we used the poles green (freshly cut) and didn't bother to debark them. Nor did we set them on a foundation of any sort. They sat right on the ground.

Then life happened, and we never did anything about making a proper open shed. We continued to use this one. It's absolutely amazing that it lasted 15 years!

In the last storm which dumped 7 inches of rain and blew some serious windy gusts, several of the upright support poles gave up the ghost and snapped. They were so dry rotted that I'm puzzled that they hadn't broken earlier. Not just little sections here and there, but the entire lower half of all the poles were dry rotted right through. Sitting right in the ground had allowed both moisture and fungus to creep up the poles.

I took a before photo of the damage in order to show you, but I accidently deleted it. But things looked bad. Just imagine 5 of the poles in the front were snapped off at various heights, plus one in the back corner. The roof never fully collapsed but it sure was a wavy, wonky mess. When I came out one morning and saw the damage, my immediate task was to get the dogs out from under the collapsing roof. They have a 10' x 30' kennel pen there. Next was to remove the equipment that I could.

Hubby was all for pulling out the remaining poles and bringing the whole mess down. David took a look, checked all the horizontal poles and found them to be sound. He suggested replacing all the upright poles with 4"x4"s, thus saving the structure. I gave him the go ahead to try.

First task was to brace things so that it didn't totally collapse. Next was to acquire a bunch of 4"x4"s. Then by using two hydraulic jacks, David coaxed the roof up one spot at a time, replacing the upright poles, this time making sure that they rested atop concrete.


Amazing. He made it look easy and simple.

So after a day and a half, we now have a repaired open shed which should have many years of life left in it.

Email ThisBlogThis!Share to TwitterShare to FacebookShare to Pinterest
Labels: Repairs

How Wet Is It?

I met "F" in town at the coffee truck today and she asked if I was getting lots of rain where I am. Rain? Gosh, do I have rain? You betcha!! It's been raining a awful lot for the past five years. And recently it's been wet almost every day. This past couple months have been the worst so far.

Here's a photo to show how wet it's been recently. This pipinola is still on the vine......and it's sprouting! Not only is it sprouting, but it's growing roots too. And this is not the only one doing it. I'd estimate that 50% of the mature pipinolas are sprouting right on the vine. Yup, things are wet here.

Guess what just came out of the woods. 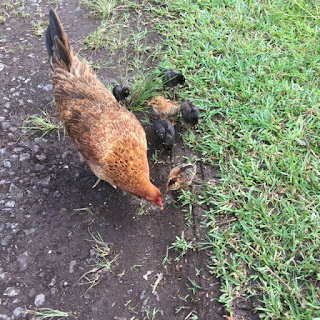 I had no idea that a hen has been sitting on a clutch of eggs. Looks like she has 6 chicks.

Sometimes around here I get surprised.
Posted by Su Ba at 9:21 AM 1 comment:

Rain moved in before much got accomplished. But there's a bit added to the condo, enough to make me satisfied. Little steps are fine with me.

So, the plywood got put up on the walls. The first two pieces of fencing got nailed in place. Then a steady stream of water fell from the sky, resulting in a mad dash for cover. So I....not some cat....became the first to occupy the first cat condo. I can vouch for the roof being watertight. 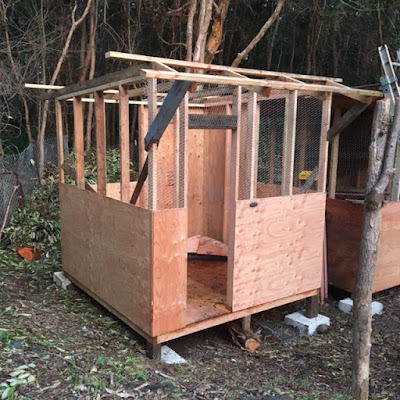 The rain never stopped, though it lessened considerably. But progress on the cat pen halted for the day. It's not that I don't work in the rain....I do!!!....but the hammer tends to slip off the nail and fence staple heads when it's wet. So I opted to go harvest the excess plants from the ponds and gather other material for composting, thus filling another compost bin before calling it quits. Time to move indoors where it's drier.
Posted by Su Ba at 9:58 PM No comments:

With the first condo almost done, the second is being roughed out. It's basically the same, but a tad different. The roof will be a bit different. The door on the other side. And I plan to paint it differently. Hubby simply didn't want them all looking exactly identical.

Most of the materials for making this condo are new. But I have found a couple used 2x4s and a 4x4 to incorporate into the building. Of course the roof metal is reused.
Posted by Su Ba at 10:33 PM No comments:

The first cat condo is nearing completion. Corner shelves are up. For interest, there's a log that the cats can climb in order to go through a hole up to the top shelf. I think this is cool, though we shall see what the cats' opinion is the same. I plan to carpet these two shelves.
I also plan to build a long shelf along the opposite wall, more like a cat deck than a shelf. This too will be carpeted. And finally, I plan to paint the condo. Then I'll add cat beds & hide-e holes, assorted toys, cat box, feeding & watering stations, and it's ready for its first resident.
Posted by Su Ba at 10:32 PM 1 comment:

Driving up to Volcano (it's the name of a village, and yes it's at the top of Kilaeua Volcano), we could see rain up ahead of us. But the sun was shining full tilt behind us. Hubby noticed that a rainbow was starting to appear. A few more miles and the rainbow became one of the top ten rainbows we've ever seen here in Hawaii.
I just had to stop the truck and get out for a photo........me and about a dozen other tourists. This rainbow was spectacular. A complete double bow and far more evident than the photo I got. And the first bow was super vivid and intense, it just screamed it's colors. With only a cellphone camera, I couldn't get a decent picture. But it was one of those bows that wow you to the max.

Got the first condo almost completed, but I ran out of daylight and strength. Both ran out just about the same moment.

The old metal roofing we took off the house roof is being repurposed for the cat pens. Some of it has bad spots that have to be trimmed off, and there will be times when we need to piecemeal it together. But since it's just small pens, things will work. The idea is to have a dry enclosure. A good coat of paint will make it look nice.

The lower half of the walls are plywood. This accomplishes a few things......gives the cats privacy, provides more stability to the construction, prevents most of the rain from wetting the pen, and acts as a bit of a windbreak. And as a non-intentional benefit, provides me with a canvas to try out my artistic painting skills.

The upper part of the walls are open for ventilation, daylight, and view -- so that the cats who want open spaces won't feel boxed in. Ventilation is real important.

I still need to block up any spaces between the walls and the metal roof. Any gap would invite an escape attempt.
This condo was built with a combination of new and reused materials. About half the 2x4s are reused. 2 sheets of plywood are too. And the entire roofing metal is reused. And while the four corners are on new concrete pier blocks, the center also floor support is reused block with wood pier. I'll be able to use reuse hardware fit the door, but all the chicken wire is new. This project uses up all my reuse lumber. Happily I won't need to buy any roofing metal. Guess I'll be scrounging around for old lumber once again in order to replenish by stash.
Posted by Su Ba at 2:37 PM 2 comments:

Now that the dangerous trees have been downed, I'm cleaning up the area, getting ready for making hubby's cat condos. Getting rid of all the trash branches will take months, as I sort through the mess rescuing wood for other projects. The litter will move into the bio trash pits, to eventually become soil for another garden area.

The larger branches will be recycled into posts and pieces to use for cat jungle gyms. Some will most likely be used in my woodcraft furniture projects. The trunks will get milled into slabs, but that's another adventure.

One fairly level spot has been cleared, so the first cat condo has been started. This one is going to be a rather simple design. 8' by 8' and straight forward -- a box with a shed roof. Nothing fancy. A plywood floor, plywood wall windbreak all around, metal roof. I'm using chicken wire for fencing, something that young kittens can't squeeze through.

I don't recall if I mentioned this before, but In order to make sure that certain things get done, we have a "first of the month" job list.

... Check solar batteries and service as needed.
... Clean the solar panels.
... Apply once a month flea control on the cats & dogs.
... Administer heartworm preventative to the dogs.
... Deworm the sheep and donkey.
... Give all the animals a quick exam, looking for early signs of problems.
... Check condition of catchment water and add amendments as needed.
... Check the inventory of emergency supplies and replenish as needed.  This includes propane and gasoline.
... Check the condition of the field fencing.
... Flush out the raingutter system.
... Check farm equipment and service as needed.

And finally......gather up all my work shoes and clean them.

There's lots and lots of other tasks that always seem to need doing, but these core jobs are always repeated month after month. Without having a monthly to-do list, I fear we'd never get these done in a timely fashion. I'm way too good at putting things off until tomorrow.

Over the next few months, a lot of weird wood crafted shelves are going to appear in our house. Toying around with some bits of wood scraps, I'm learning that lots of them can be used for making neat things that are far more interesting than firewood..........though when you're really cold, wood looks best when burning.

Here's a shelf, jazzed up with funky branches I could dangle or hang things from. It's probably overdone with the branches, but it's not a problem. They can always be lopped off later. For now I'm a bit enamored with branches, so they'll stay.

Yup, those are dinosaurs! I'm a died in the wool dino lover.
Posted by Su Ba at 3:16 PM No comments:

Email ThisBlogThis!Share to TwitterShare to FacebookShare to Pinterest
Labels: Woodcraft