My corn growing experiment is coming along quite nicely. The plants are 10"-12" high now and in need of thinning. I've learned from previous garden failures that crowded plants do not yield very well, if at all. Since I had sown the corn seed fairly closely due to the fact that I wasn't sure if it's germination ability (I didn't want to take the time to test it because of the delay it would cause in getting the crop going), many plants are too close to one another. In the photo below, there are spots where the plants are clumped together, and every row is too closely spaced...... 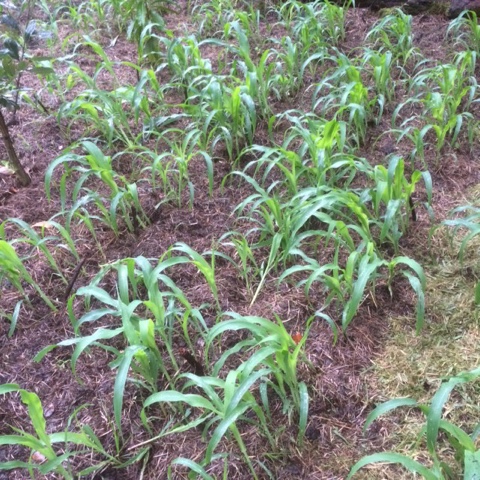 This corn patch is small, so it wasn't a big deal to go in and thin with wild abandon. Well, not quite that wild, but I did remove anything that was closer than 6" to its neighbor. The thinnings went to feed a treat to the rabbits. I made a point to leave the most healthy and robust looking plants while removing the small or thin ones. 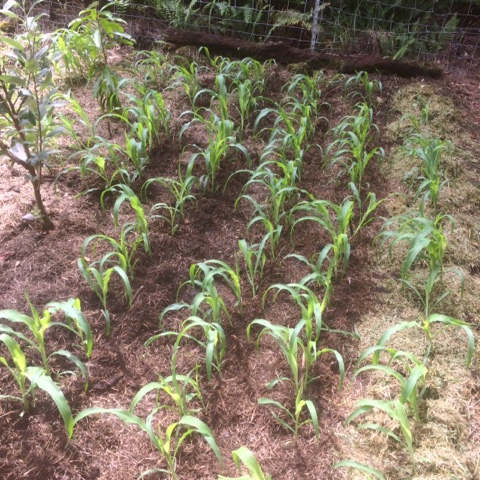 Once thinned (above) I lightly dressed the area with with a thin layer of chicken pen litter, placing it right atop the old grass clipping mulch. After this photo was taken, I added an inch of fresh grass clippings atop it all.
I don't expect these stalks to get taller than 5'. So I think they can deal with about an average 10" spacing. Plus the soil in this spot has only been "improved" twice (that is, the previous crop and now this corn), so I'm not anticipating a dynamite corn crop. But surprisingly, the corn looks pretty good so far.
Posted by Su Ba at 10:30 PM

Email ThisBlogThis!Share to TwitterShare to FacebookShare to Pinterest
Labels: Corn