The rabbits are now 6 months old and ready to start being bred. So I examined each one individually, checking their physical condition and reconfirming their sex. No sense putting two females together and wondering why you're not seeing anything happen! Well, I found out that at least I got all the sexes right. That's a start in the right direction! Don't laugh. If you've never sexed a rabbit, you don't know how easy it is to guess wrong when they are young. None are wearing pink or blue booties to give you a hint. 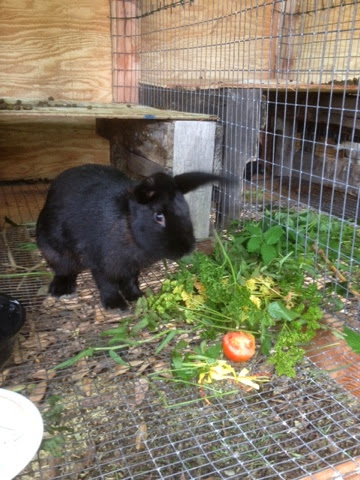 Everybody looked good as far as being normal. No dental problems, no lumps and bumps, no other abnormalities. Everyone looked healthy. The only issue I discovered was that some of the females were too lean. Even though they have assorted fresh foods and alfalfa hay cubes in front of them 24 hours a day, some of the females weren't getting enough energy foods. 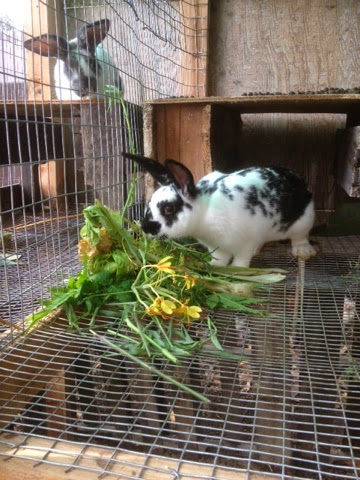 Since it will take time to be able to grow higher energy foods for them, I'm temporarily going to resort to feeding them small quantities of commercial grains. Feeding grain to rabbits can be tricky, so I'll start out by giving them one spoonful of cooked corn/oats mix each morning. I plan to weigh those individual rabbits each week to gauge their progress then adjust the grain amount accordingly.
Rabbits being fed pellets or hay normally meet their energy requirements without needing grains. But when fed predominantly fresh foods, the water content is high, thus limiting the amount of feed (thus energy) they can consume in a day. My rabbits with the bigger appetites appear to be doing well on the fresh diet, but those that are lighter eaters are thinner. From a breeder/farmer point of view, these light eaters will be candidates for being replaced in the future with aggressive eaters. I won't do it now, but eventually they will go into the freezer.
One other thing I will try to determine --  are those thinner rabbits the bigger or faster growing ones? Quicker growth and larger size is a plus, so I may have to take that into consideration if they are the thinner rabbits. I don't want to cull out rabbits that have desirable growth traits just because they need a bit more energy while growing. Perhaps I should be weighing my rabbits weekly and do some basic body measurements so that I can get a better handle on which ones to keep as long term breeders and which ones would be better suited to the dinner table.
Posted by Su Ba at 11:16 PM