My kitchen taro garden is atop a concrete pad. For real!!!! And I was told by many that it couldn't be done. Ha!
The concrete pad is actually to top on the cesspool. No ick factor here because nothing, zero seeps out of the cesspool top...ever! Very little goes into this large cesspool, nor does it fill with water. So it's chance of overflowing in my lifetime is virtually nil. But the cesspool top takes up a large section of the yard outside my kitchen. Rather than staring out the window at a cement slab, I decided to cover it with compost layers.
Everyone warned me that I'd never be able to use it for a garden and that I'd be lucky to get grass to grow there and stay green. Initially I did grow a lawn there, but I'd rather be growing food. So the grass was flipped and I planted taro. It thrived. 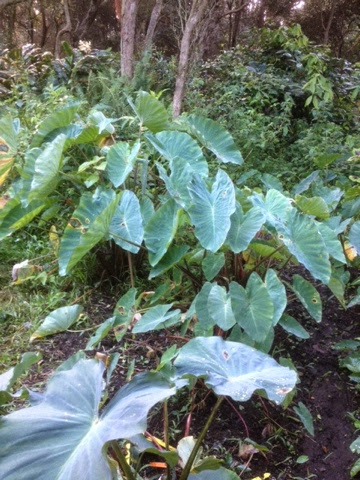 I've harvested quite a but of taro from this garden atop solid concrete. Ha, told ya so that I could do it! It just took very fertile compost/soil and water. I'm constantly adding discarded fruit, weeds, and grass clippings. Plus a light layer of volcanic cinders to keep things from getting too mucky, gloppy.
Today I harvested some of this organic "soil" from between the rows. 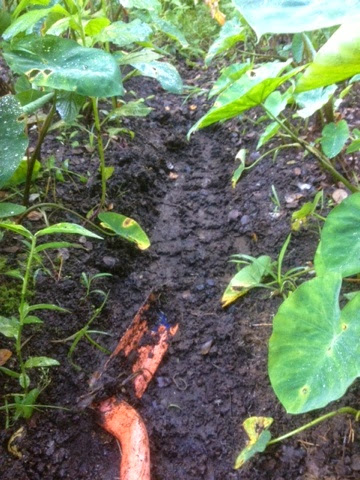 I scraped it right down to the concrete, so you can see how shallow the dirt is that the taro grows in. The color of the material is quite dark. It's moist and a bit gloppy because of the rain. 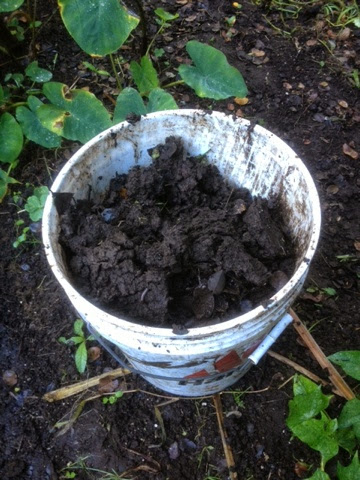 And it was loaded with worms! I'm transferring this "soil" to a bed that is being created for growing gourds. The gourds should really love it.
The trenches between the taro rows are now empty. I'll spend the next week filling them up, thus starting the cycle all over again. It's a great way to utilize discarded fruits, weeds, lawn clippings, manures. It fertilizes the taro at the same time.
If I didn't have a gourd project that needs this new "soil", I would have just shoveled the material onto the taro rows. It would have made the dirt deeper for the taro to grow in. But alas...so many projects, so little soil.
Posted by Su Ba at 11:08 PM