Ka'u has quite a bit of ocean coastline and much of it is magnificent. Not the type coast most tourists are looking for, though. They want beaches. Yes, we have beaches but most are remote. One either hikes to them to takes a 4 wheel drive. So it's the rough coast that most people are familiar with. 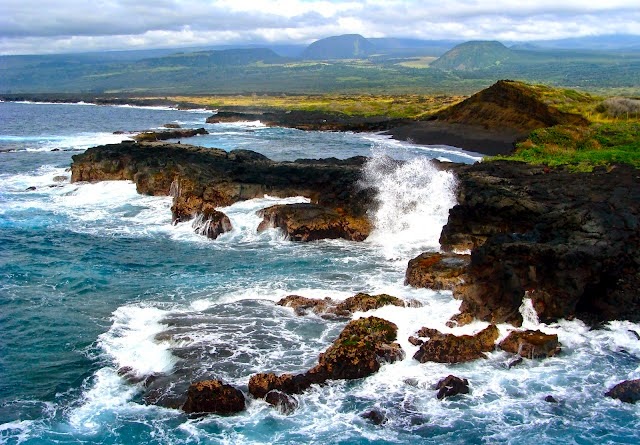 (Photo by my friend, Peter Anderson)
Rough and rocky, it makes for some super photo opportunities. The water turns a stunningly beautiful turquoise in the shallow areas, which you have to admit contrasts beautifully with the dark lava and blue ocean. This picture is pretty but it looks so much nicer in real life. 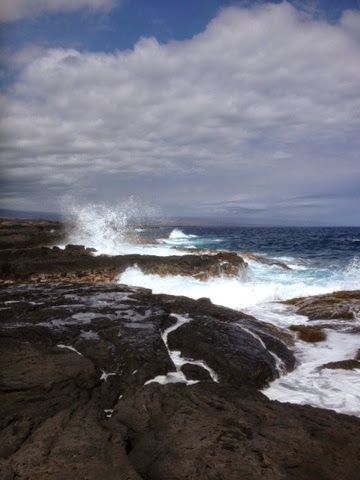 So you think the water in these photos is rough? You ain't seen nothing! I've been along the coast when the tradewinds or the Kona winds are blowing causing sprays to shoot 30-50 feet above my head! Maybe more. 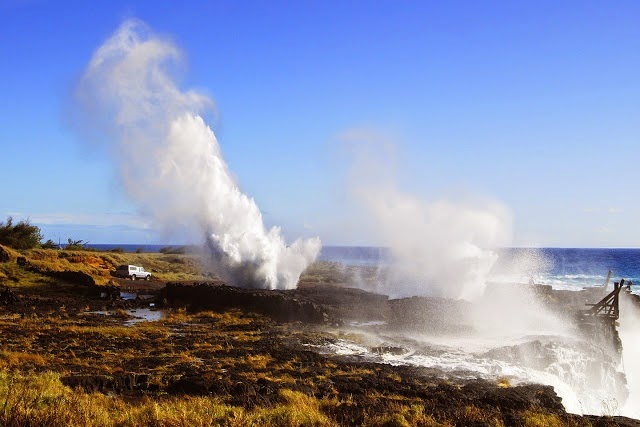 (Photo by Peter Anderson)
Waves crash so hard that it's not safe to get anywhere near them. Rogue waves routinely come between some sets, gigantic and strong enough to knock you down and wash you to your death. For real! Every year we lose fishermen (the opihi pickers) sucked off the coast by a strong wave then smashed to death against the rocks. It ain't pretty. It happens. Though dangerous, the coast is magnificent. In fact, I can't think of a superlative stunning enough to describe what it's like to stand there and experience the ocean, the lava, the wind, the feeling. Aaaaa, I'm in love!
The beaches here are made of either ground coral, lava sand, or olivine. Or a combination of those. As a result you'll hear that Ka'u has white beaches, black, or green ones. Green? Yup. The famous Green Sands Beach has quite a bit of olivine sand, giving it a green cast. 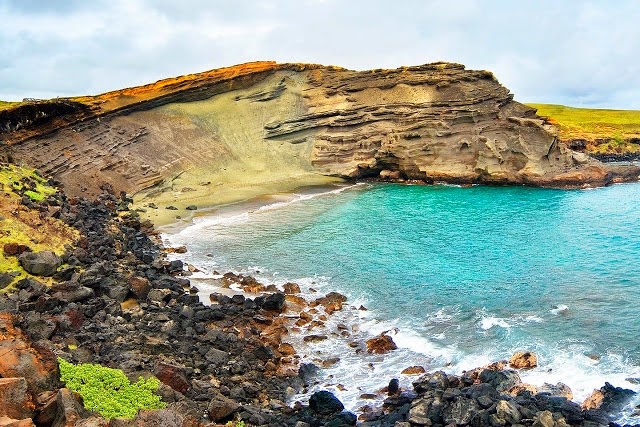 (Photo by Peter Anderson)
Not green like a lawn, but greenish. Every day tourists by the score walk out to see it, often disappointed that it isn't bright green. Not every tourist makes the walk. It's three miles in the dry, hot sun over 4 wheel drive tracks. If you go, be sure to wear solid toed shoes and bring no less than a quart of water per person. Word of advice.... forget it if you need to bring a stroller or a wheelchair. And leave the babies, toddlers, and elderly behind.
Black sand beaches are beautiful. I never saw one until I came to Hawaii. They are created when hot lava hits the cold ocean water. The lava explodes. Ta-da .....black sand! 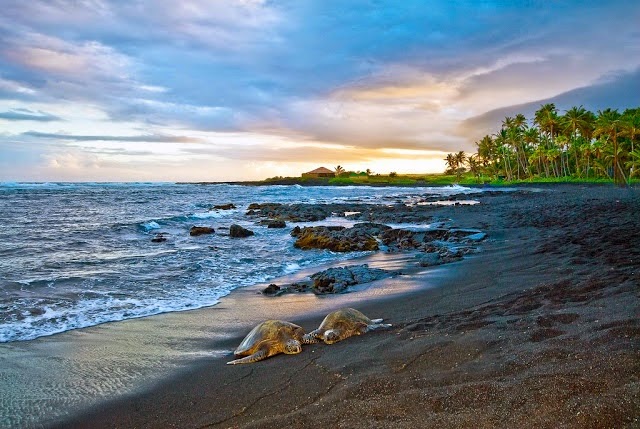 (Punalu'u black sand beach, with basking turtles. Photo by Peter Anderson)
White sand beaches are made of coral sand. Ever wonder how the white sand is created? Wave action? Nope. It's fish poop. For real! No, I'm not pulling your leg. We have a fish here called the parrot fish. They scrape the coral surface for algae, scraping off a tiny layer of coral with each bite. Now that coral has to exit somehow. Since parrot fish don't vomit, it comes out as poop. Thus parrot fish = white sand beach. Yeah, think of that next time you see a picture of Waikiki. That's one heck of a lot of fish poop.

(White sand beach, photo by Peter Anderson)
The waters of Ka'u are noted for fish. South Point is a popular site for local fishermen. 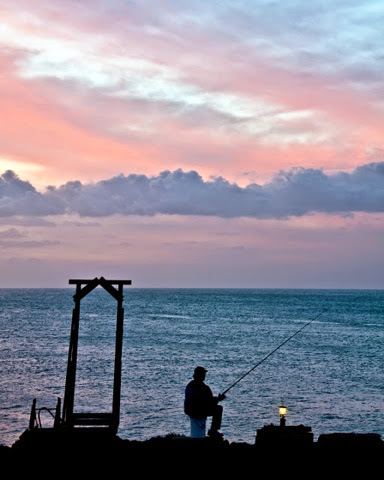 If you're a sport fisherman, don't bother. The ocean currents are too rough for a boat. But a local can spend the day or night sending lines out from the coastal cliffs, bringing home some nice fish for the freezer, to share, or to sell. 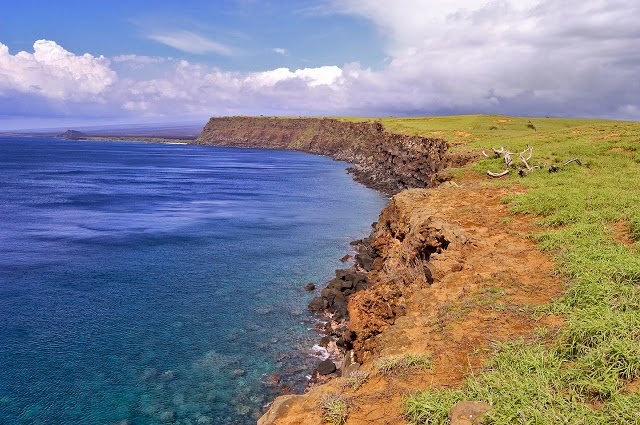 (The South Point cliffs. Pretty impressive.)
Or a spear fisherman can swim on the protected side and catch enough for a family dinner in 20 minutes. If one doesn't mind the hike, a section of coast behind Na'alehu hosts a healthy fish population. Fishing there is always rewarding. No wonder it was the site of a large, old Hawaiian village.
Walking Ka'u's coastline is not too difficult. There is an old hawaiian trail that still exists along much of it. The coast can be accessed at a few easy spots. Non-hikers with normal cars can enjoy a taste of the coast at Honu'apo and Punalu'u. 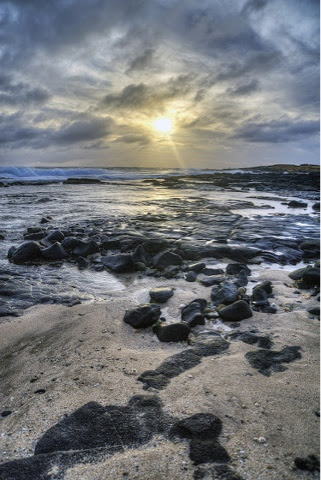 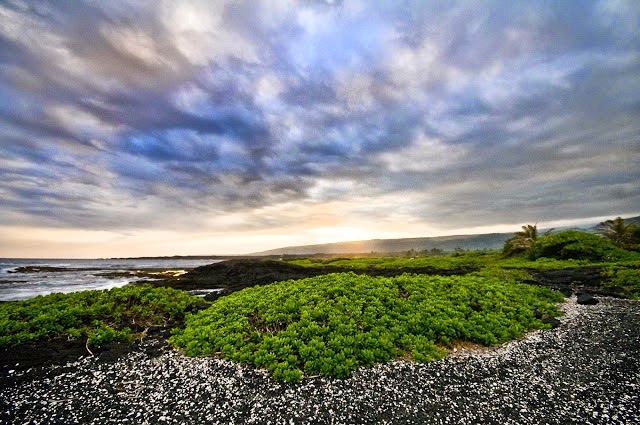 (Above photos by Peter Anderson)
Four wheelers have more opportunities. And hikers can visit most of the coastline although overnight camping will be required in some of the remoter areas.
Remote coastline? You betcha. There's no highway running along the coast. At only one spot does the highway skip along the oceanfront. So our coast stays beautiful. No condos. No resort hotels. No tourist traps. Not virgin -- ancient Hawaiians lived all along this coast. Not totally pristine -- too much ocean trash washes up. Regardless, it's one helluva great coastline.
Having lived my life mostly as a landlubber where the terrain was flat, I never tire of seeing the coast very day. I don't live along it, nor can I see it from my homestead. So it's a real treat every morning to drive into town and see the coast and horizon in the distance. Everytime I see it I remind myself that this is a great place to live.
Peter has taken lots of photos of Ka'u, so here's a few more: 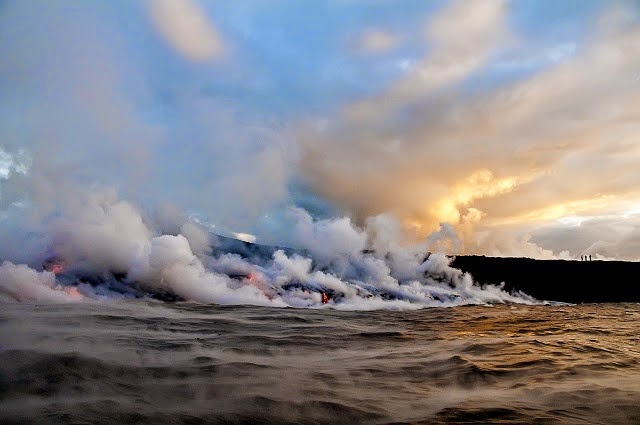 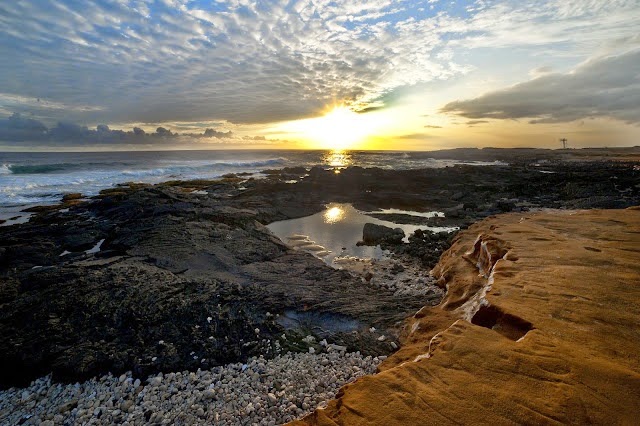 Sunset along the South Point coast. 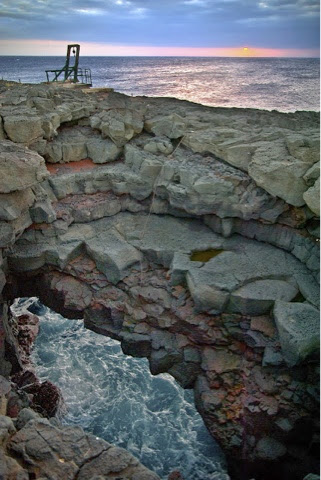 The South Point blowhole. This is an interesting formation. Tourists seem drawn to jumping into the ocean through this hole, though for the life of me I can't fathom why. It's incredibly dangerous and several tourists have been seriously injured or even killed.
Posted by Su Ba at 11:00 PM