Last day of my Thanksgiving vacation proved to be special. I was invited to Kapapala Ranch for a picnic & tour. What a treat!
Kapapala Ranch is a large (34,000 acre) working ranch in my region. Yes, it's huge. 90 miles of ranch roads, 350 miles of fence line. It hosts 2400 breeding cows (plus bulls and calves) and 2000 Spanish meat goats, several donkeys, and numerous ranch dogs. It's an amazing operation. Unless you've seen it, it's difficult to imagine the incredible terrain, the beautiful vistas, the forests and wildlife. Seeing this vast ranch just blew me away, for real!
Starting out from the ranch house, ... 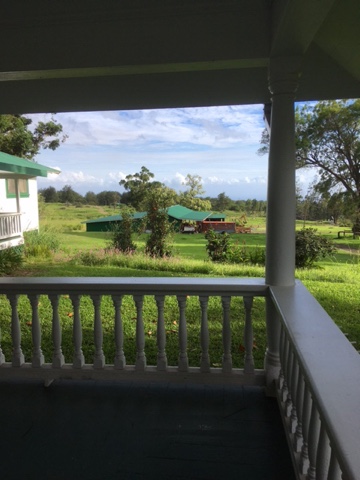 we climbed aboard one of the ranch trucks .....along with 6 of the ranch dogs. Their choice to go along, while several others decided to stay behind. 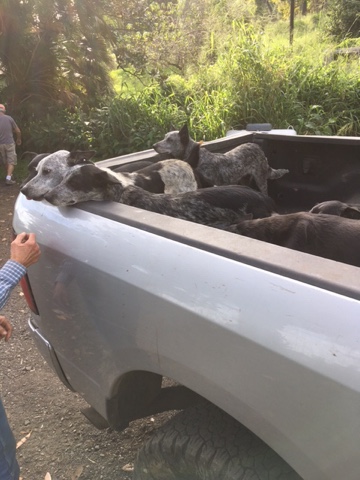 3 of the dogs opted to hop out and run the whole distance, one chose to ride the whole trip, and the others hopped off and on like we were a San Francisco street car. 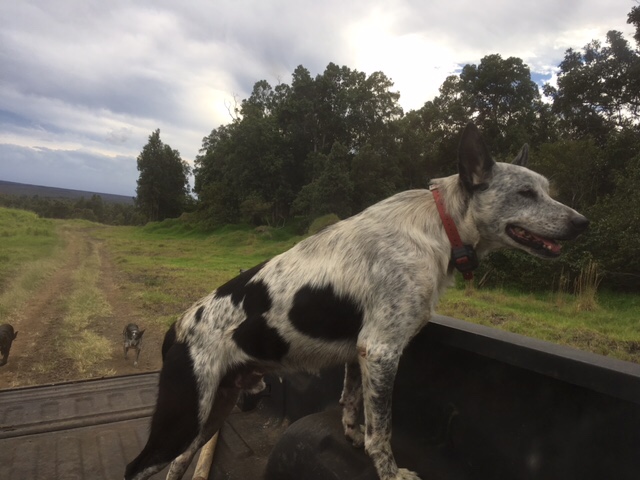 I got the feeling that those dogs were hoping to find a job along the way, but no luck. This was a day off. Can't call it a day of rest, since several of the dogs trotted miles and miles.
First let me say that this wasn't like any Sunday drive I've ever gone in before. We travelled the ranch roads at a dog trot speed (8 mph, yes the dogs trotted along with the truck the whole way), so rough that it was impossible to keep one's elbow on the armrest. The road started out pleasant enough, but the higher we got in elevation the rougher the road became. 4 wheel drive LOW was required! 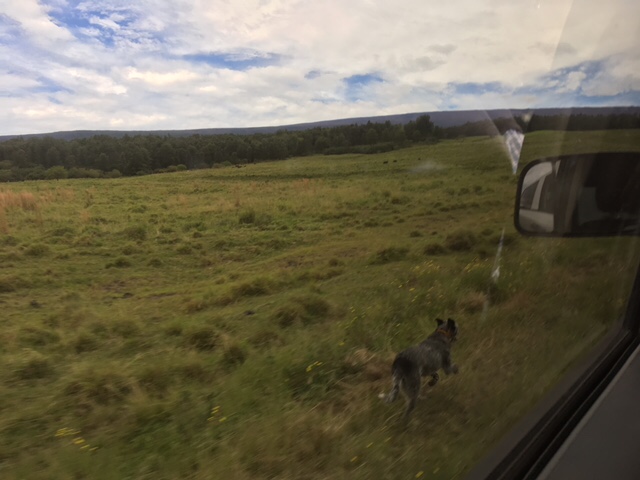 The open pastures were once planted all in sugar cane back in the plantation days. Now they support cattle. One thing I was surprised to learn was that sugar cane had been planted at rather high elevations. And rather far away from the processing plant. Some of those more remote fields had been abandoned earlier than the closer fields, and while they now sported some tree regrowth, they were still predominately grassy. Interesting fact -- clumps of banana trees exist here and there in the fields. They had been used as markers in the cane fields to warn of dangerous situations for the heavy equipment. When the cane fields were burned off for harvesting, the bananas did not burn. Thus there was a clear warning of existing pukas and fragile lava tubes. Pretty clever solution.
Around every turn there seemed to be another amazing nature scene. 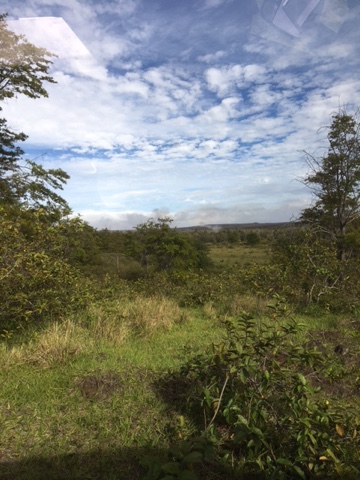 The higher we climbed, the more native the forest got. By the time we reached the top of the ranch (5000' elevation), the forest had changed to koa and ohia trees, the home of the i'iwi (a threatened Hawaiian bird). While I spotted i'iwi, there's no way I could get a photo of one. But what a thrill ---- I actually saw my first i'iwi!!!!!!
Our destination was the ranch reservoir. 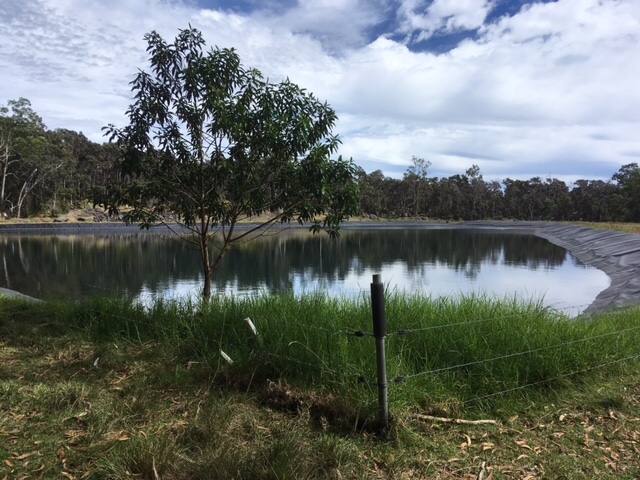 Manmade of course, it supplies the ranch with quite a bit of valuable water. The reservoir looks to hold about 4 million gallons and gets its water from a 3 acre catchment field above the reservoir itself. From here, 9 miles of pipe send the water down to the lower ranch where it is needed.
It's a great location for a picnic. Up here in "god's country", miles from civilization. 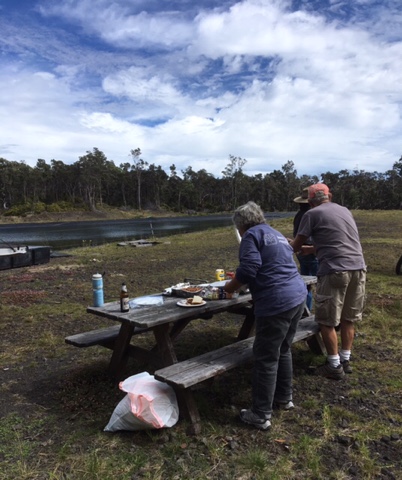 Heading back down after lunch, we passed the goat herds being guarded by several large guardian dogs. 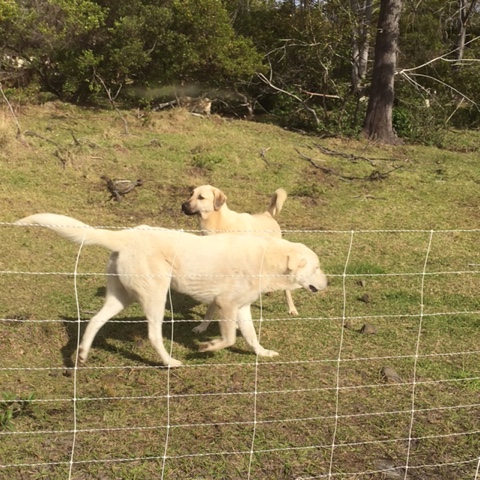 We also visited the Ainapo cabin along the way. 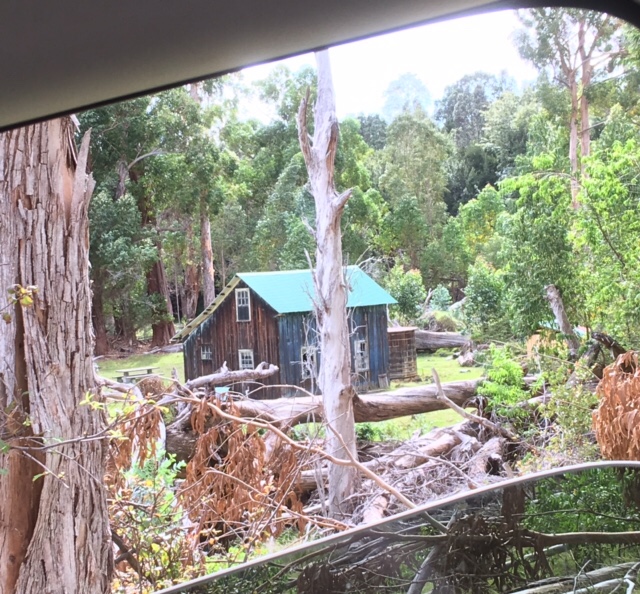 This little cabin was built in 1840 and is quite historic. Isabella Byrd stayed here in her trip up Mauna Loa, though I don't recall the year off the top of my head. This site was an established camping area prior to the cabin being built here, and it still retains its charm to this day.
Coming downhill, the coastline views are impressive. One turn after the other revealed spectacular vistas. And usually we had at least one dog leading the way. 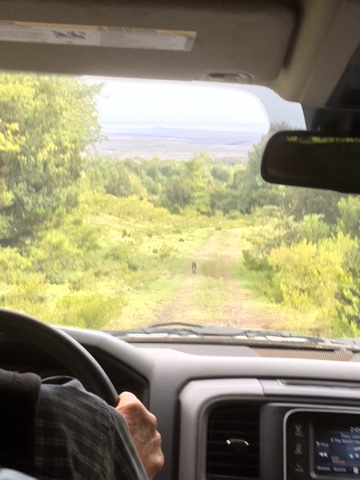 What a grand trip. I am ever grateful for being invited along. Mahalo nui loa !!!
Posted by Su Ba at 9:43 PM