I've been pretty busy these past few days making pallet grow boxes, gathering debris to fill the boxes with (I got one box filled, another 90% filled and ready for soil capping, two others half filled), planting new taro keikis, starting two small bean beds, and most interesting -- getting ready for the arrival of bees. 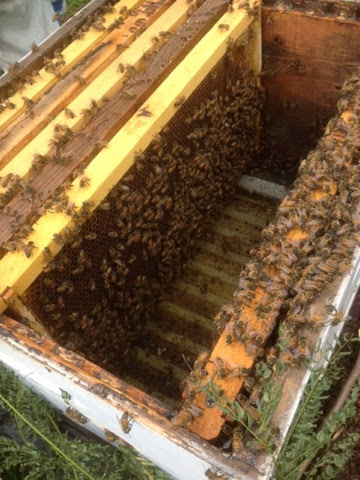 (Looking down inside an opened beehive with some of the frames removed. You can see lots of bees crawling around. Most of these guys are newly hatched babies and caretakers.)
The homestead is finally home to bees. It took a little prep to get things ready. First we needed to decide where to place the hives.
1- within sight of the farm watchdog to deter theft
2- where they would get morning sun and afternoon shade
3- protected spot from the tradewinds
4- open flight pathway
5- protected from the livestock
6- away from the neighbor's house
7- not too close to the garden so as not to interfere with the volunteers
8- not too close to the driveway 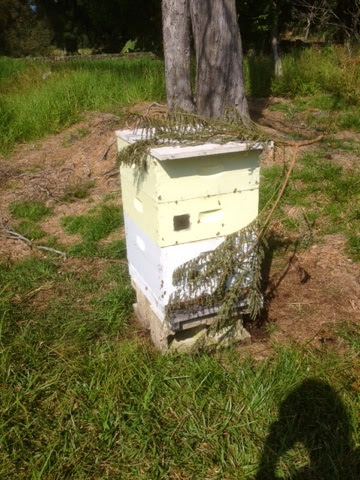 (Above hive has the tree branch in front if he openings. This triggers the bees o relearn their area.)
Once we decided upon the location we needed to make a level spot and place two cinder blocks for each hive to set on. The reason it needs to be really level is that the bottom of the hive houses an oil tray which is used to capture hive beetles and varroa mites. A bit of work with a shovel, a level, and a few handfuls of gravel and a couple small rocks and the flat pad is ready for the cinder blocks.
With the help of David and the beekeeper, we moved three hives onto the farm a couple nights ago. The move went smoothly. We waited until just before sunset so that most of the foraging bees had returned to the hive. The beekeeper plugged the entrance holes, David and I picked up each hive and gently placed them into the truck bed. Then it was a slow, careful drive to the farm where we off loaded each hive to its level platform. The plugs were then removed. Leaving them plugged is not an option in the tropics because the hives would quickly overheat. We placed a few tree branches over the front of the hives in order to let the bees know that something had significantly changed with their hive. That causes them to reorientate, thus remapping their area.
Today the beekeeper came by and we completely opened and cleaned out the biggest hive. Reason? Small hive beetle. Just prior to being moved, hive beetles moved in. So the hive needed to be cleaned or else the bees would leave. 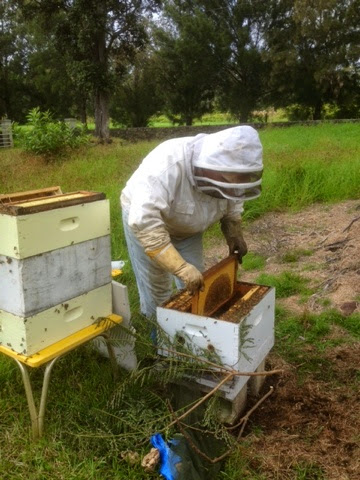 Above, the beekeeper is checking each frame in the lowest box. We had already cleaned each frame one by one in the upper boxes, removing any that were infested with hive beetles and killing all beetles that we saw. The queen is currently in a cage so that she can't move about. Her presence should keep the bee colony in the hive. Our intent is to replace her with a young, new queen in a few days. She is an older queen and no longer vigorous. 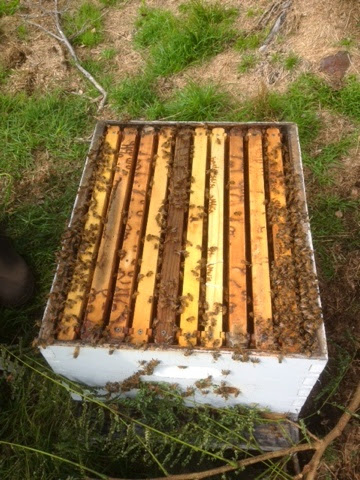 Once everything was cleared of beetles, the lower box was repacked. The beekeeper replaced two infested frames with two frames full of honey to provide food for the bees while they recover from this trauma. 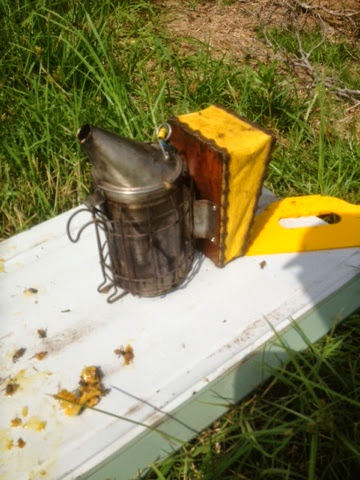 I was truly impressed how gentle these bees are. Above is a picture of the bee smoker. Smoke is used to help calm and control bees. But the keeper needed to use very, very little smoke. Just a few small puffs here and there. And while the keeper used bee jacket, gloves, and vail, I didn't. I was dressed in my normal garden garb -- shirts, t-shirt, baseball cap. Of course I wasn't the one with my hands down inside the boxes. But I was carrying frames back and forth, standing right beside the hive, had bees 360 degrees around me. I didn't get stung once though some returning foragers did ding my head a number of times. If they were trying to sting, they didn't make it through the hat.
Posted by Su Ba at 3:13 PM

Email ThisBlogThis!Share to TwitterShare to FacebookShare to Pinterest
Labels: Bees