Ok, I've learned something new about pigs. Well at least something new about Lava and her piglets. I can't say for sure that this applies to all pigs. These two piglets have a strong preference for which teat they nurse from. And as you can see, Lava has ended up with only two that are producing milk. 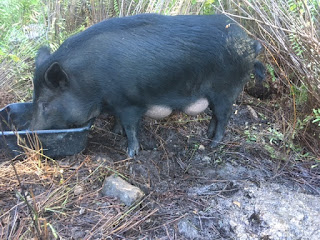 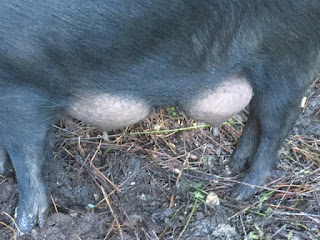 I've raised plenty of puppies and never noticed individual pups claiming specific teats. Oh, there's competition for the better ones, but they jostle around swapping teats as the milk runs out and everybody gets a chance at the milk bar. But these two piglets seem to have laid claimed to a specific teat and don't exchange. I wonder if that's normally the case with pigs.

By the way, I've checked Lava's breasts and they appear normal. No heat, no unusual hardness, and the milk itself looks fine. So her breasts are not infected. She just only has two that are producing milk right now (the others did have milk prior to her delivering), and right after I took those photos she laid down and nursed the babies just fine.
Posted by Su Ba at 11:15 PM

Email ThisBlogThis!Share to TwitterShare to FacebookShare to Pinterest
Labels: Pigs