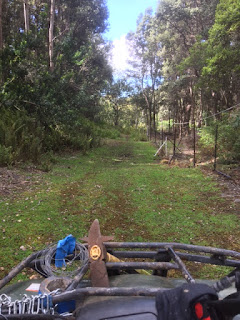 I'm starting to see greenery coming up from the first sowings. The next sowing is just getting greenish. And the third section is poking up green here and there. No sign of green from the fourth section sowed, but it's too soon for that. But it feels great seeing green starting to cover over the dirt.

Three weeks ago I had a hippy style wwoofer stop by, a young man who heard about my blog and farm. He came to "enlighten" me about using a faster and easier way to seed my pastures.............seed balls. This young man was very enthusiastic and idealistic, eager to share his knowledge and show me the better path. I was amused, seeing a bit of my younger self in him. So I let him "educate" me, and since he was in dire need of some paying work, I hired him to make a bunch of seeds balls using the oats and grass seed I was using.

To tell you the truth, I had already read about seeds balls, came to my own conclusions about the pros and cons, and decided that they would only be useful in certain situations. My farm wasn't one of those. But this young man needed to learn this for himself.

For only $20, I got about 200-300 seed balls made and thrown about a section of pasture I hadn't seeded yet. I asked this fella to return 2 weeks later to see the results of his efforts. Not surprisingly, he never returned, which is a shame. Perhaps he will still show up sometime. It would be good to see what came from his effort.

Anyway, the results ------
Wherever the seeds ball landed, a little spot of annual ryegrass seedlings had germinated. It was easy to see, a polka dot of baby grass. But none of the oats survived. None. Why? Pheasants. Yup. Any and all oats that were visible to a pheasant's eye got eaten by thus pheasant. Yum. All those seed balls were just laying out a oat seed buffet for the birds. But the ryegrass seed was small enough not to be of interest to the pheasants. But seed balls really isn't a good way to go even for seeding the ryegrass. The grass came up in little dots helterskelter. In some spots there was no grass for several feet, while in other spots many seeds balls had fallen in dense clumps. Overall the seed ball experiment was a failure. Not worth the time, effort, and cost of the seed. Under different circumstances seed balls might have merit. This wasn't one of them.

I've had far better success broadcasting the seeds, then covering them lightly with a bit of coarse mulch. In this case, I've been using the lawnmower to grind up the ferns that I pulled and using this as the mulch. It works. Yes it takes more time than throwing seed balls. But unlike the seed ball method, I'm actually seeing oats & grass filling over the bare dirt. The mulch hides the oats from the birds, giving it a chance to germinate.

Email ThisBlogThis!Share to TwitterShare to FacebookShare to Pinterest
Labels: Pasture