Now that I'm no longer consumed with securing the pig pasture, I had an chance to look around. I've been gradually working on the back pastures, trying to get them more productive. That means, eliminating the dense fern growth and the plethora of brushy wild guavas. In pasture #1, Adam hand pulled out the ferns and I cut out the guavas and any other scrubby looking tree. In pasture #2 David weedwacked the ferns down, and I'm in the process of removing scrubby trees and brush. Plus in the Secret Garden area, ferns were removed both ways -- hand pulling and weedwacking. So what's my opinion?

Hand pulling was a lot more physical work and took far more time. But it had two plus factors.......it gave me lots of material to grind up for mulch, compost material, and livestock bedding. And it was far better in controlling regrowth of the ferns. In fact, only a few ferns are growing back here and there and they are easy to pull out. 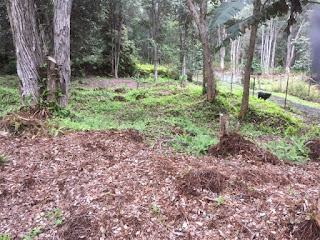 Weedwacking was vastly quicker. Greatest advantage : less time spent. Hand pulling took weeks, weedwacking took 2 days, Downsides: no material for compost and bedding. The wacked up plant pieces lay atop the ground like a mulch, which sounds good but it has majorly interfered with trying to get oats and grasses I seeded to germinate. The seed isn't making good soil contact. The second downside : the ferns are regrowing with a vengeance. I'm now not to sure that the sprouting grasses will be able to outgrow the ferns. This leads to another downside.....weedwacking the ferns leaves behind a hard stubble. This stubble is sharp and well anchored. Pulling them out at this point is far more difficult than pulling out complete plants. Attacking the stubble with a tiller isn't possible because the ground is totally unimproved rock with dirt between. And the ground hasn't been bulldozed so it is a mass of ups, downs, boulders, and trees.

I've decided I prefer to hand pull the ferns. I like the results better.
Posted by Su Ba at 9:49 PM