Matt is my next door neighbor. We sort of help each other, as Matt puts it, farmers helping farmers. I've just spent a few hours tilling up his gardens, removing dozens of rocks we somehow missed before. I had planned on tilling in compost and manure, but I missed my opportunity. Matt beat me to the gardens and seeded several rows of green beans. As I mentioned before, he's super eager to get growing things again. So I'm faced with a change of plans. Instead of tilling the soil nutrients in, I'll use them as mulch once the beans sprout. It won't be quite as good, but it is a darn good second option. 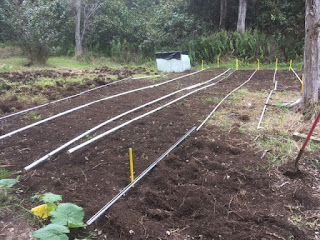 In Matt's eagerness to grow veggies, I discovered that he removed several pineapple plants and dug the soil to expand his bean gardens. If I had caught him in time, I would have explained that the area he chose to expand his bean planting seeds had a few factors he should have taken into consideration...,
...the area is within the adjacent trees' root zone. This will interfere with most crops, although pineapples appear to be compatible with the trees (they just take longer to produce as compared to open sunny garden beds).
...the spot is partial shade. While pineapples can tolerate the partial shade, the beans won't be as happy.
...the pineapples were starting to flower. Looking down into the crowns, I could see the starts of baby pineapples. After waiting two years, it's a loss of a crop. Sigh.

It was Matt's choice. He obviously wants beans more than pineapples. I just think it's going to be tough to get the beans to be real productive in that spot. So we shall see how he does and what happens.