The past month the rain has almost been non-existent. And the yacon has acted accordingly. It quickly matured, produced tubers, and died back. 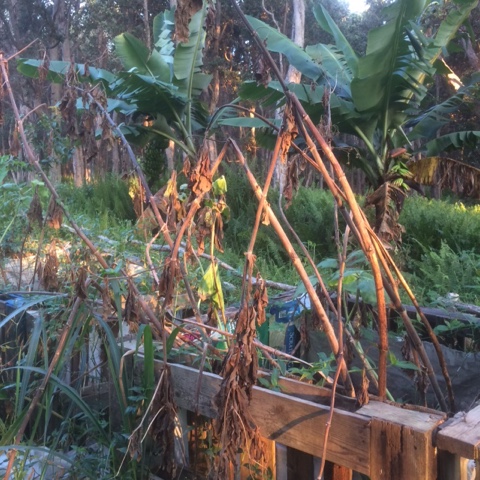 Above, all those brown stalks are the died off yacon.
Normally I've waited until Thanksgiving to start harvesting yacon, but obviously with the plants died back, there's nothing holding me back from harvesting now. So I opened the pallet grow boxes to see what was up. 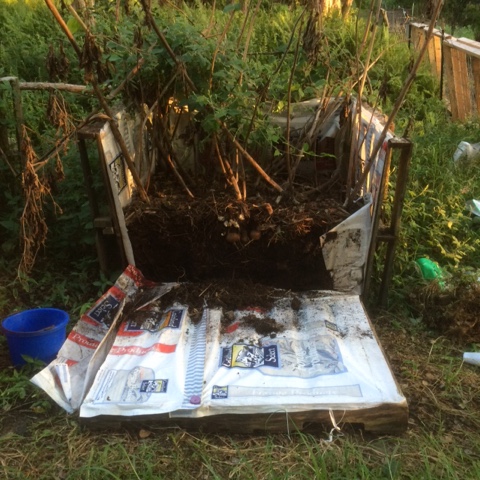 Below is a closeup. The plant, conveniently I might add, grew right along the side of the box. Removing that side revealed a perfect demonstration of the yacon growing habit. Brown stalk above, propagation nodules at the soil surface and just below (the whitish knobs), and edible tubers underneath (the brownish tater-like things). 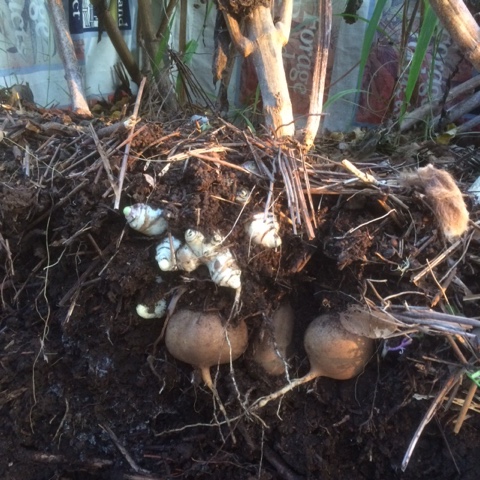 After shaking the dirt off and removing the plant from the box, here's what I harvested..... 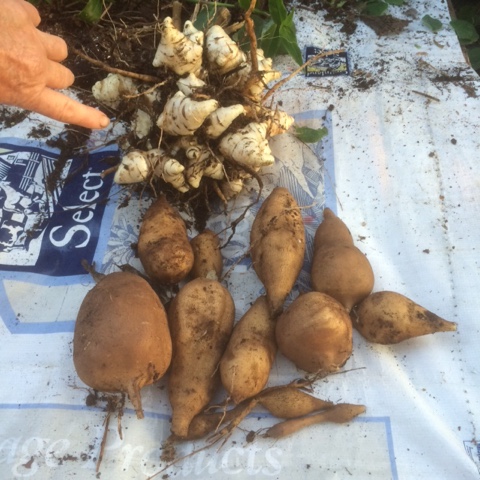 Wow, even I was impressed. But I soon learned that the whole box wasn't so productive. Each pallet box contained six mature plants. But only the one that was along the front wall produced lots of nodules and tubers. The other plants also produced, but not nearly as much.
Why the difference? The pallet boxes were located in the semi-shade. I was using a space not deemed prime for most vegetables. But I was testing to see if yacon would do ok there. The front edge of the pallet boxes actually got more sun during the year than the rest of the box, due to the differing inclination of the sun during winter versus summer. That's because tall nearby trees interfered with the sun during the summer, resulting in quite a bit of shade.
Conclusion: yacon does better with more sun. Although it will produce some in semi-shade, it produces a whole lot better with more sun. Therefore I will change the location where I'm growing yacon and move some other crop to this semi-shaded spot.
By the way, did you notice that the pallet box also yielded a half cubic yard of compost/soil? I'll reuse about 33% of that to restart the next pallet grow box and move the 66% to a spot in the gardens that is begging for more soil. I have plenty of shallow beds that could really use the addition of compost/soil mix.
Posted by Su Ba at 4:16 PM

Email ThisBlogThis!Share to TwitterShare to FacebookShare to Pinterest
Labels: Yacon