Walking Path Around the House -Update

What started out months ago as a path to go from the car parking area to the front door in order to avoid wet slippery spots (think = falls) has now morphed into a huge project. Not so much a difficult one, but every time I think to myself that I'm close to finishing, we decide to extend the pathway a bit more. Initially I has thought the path would just go around in places where I frequently walked. That's no longer the case.
In the photo below, just about where the black cat (a.k.a Dik Dik) is standing is where I last reported on the progress. As you can see, a lot more pathway has been created. Note the two white pioes going under the concrete. One goes from the rain gutters to the water catchment tank. The other is just a short empty piece of pipe. That's so there will be an easy underpass in case we decide in the future to run a hose, pipe, or something else from that point of the house and out into the yard for some reason. Far easier to install the underpass now than to try to dig it later, especially considering that the ground has lots of lava chunks and boulders. It would be a nightmare to dig! 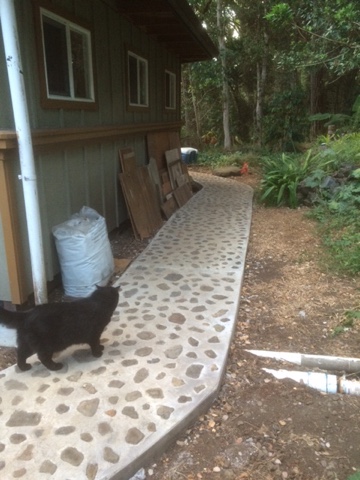 Below, the path is now going around the house and heading for the next corner. Dik Dik is helping by leading the way. Sorry about the junk.....coolers and trashcans. Just moved them aside so that the wheelbarrow could get through easily. They're normally stored along the house on this side. 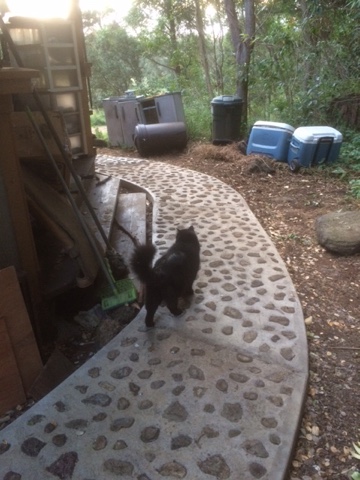 The pathway is now competed up to the far corner. Are we going to keep going? Gosh, it's got this far so why not. The game plan now is to circumnavigate the house. As I said, the project surely has changed from its initial purpose. But that happens to me a lot. I'm use to it by now. 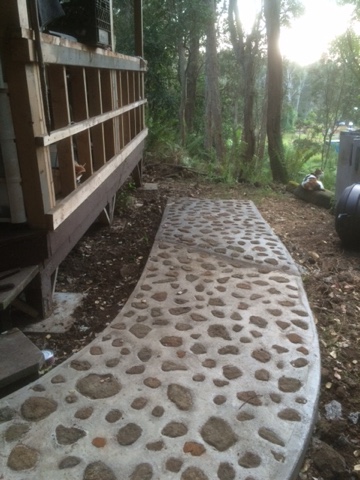