Direct Sowing Seeds in the Garden

There are two techniques I tend to use when direct seeding into my garden beds. One method I prefer to use on dry years.......scooping out a shallow trench or bowl and planting the seeds into it. (I also use this technique with certain root crops, and will describe it in tomorrow's post.) During wetter and "normal" years I use the method I'm showing here.
First thing, I till in soil amendments as needed. Till in the old mulch, compost, a tad of coral sand, a tad of lava sand, perhaps some biochar, perhaps some manure. Once lightly tilled using a small rototiller, the bed is ready for planting. I don't build hills nor create furrows. The soil is level and smooth.
The seeds go in, and the bed gets labeled using yellow stakes. Yellow for visibility....tall so they don't get lost in the foliage. I admit that I can no longer rely upon my memory to say what I planted when, so stakes it is. Next step -- water the seeds in. Below you can see that there are two rows, watered, with lighter colored drier soil between them. 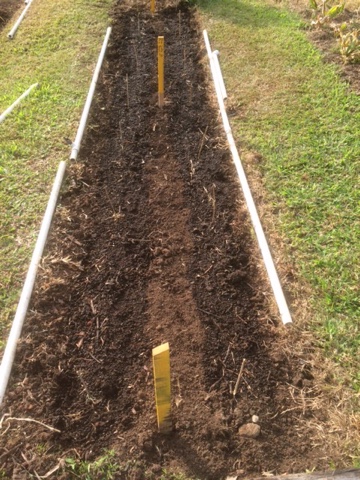 Next, I poke thin bits of bamboo twigs along the row so that I will know where I planted those seeds. That lets me know where I need to concentrate my watering efforts until the seeds sprout. I used to use tree twigs but I found bamboo to be easier to use, longer lasting, and more visible. By the way, I grow my own bamboo here on the farm. 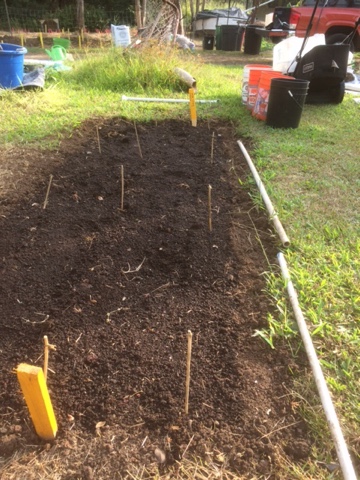 Because I get tropical winds and sun, exposed soil dries out rapidly. To prevent this problem, I LIGHTLY mulch with fine grass clippings. 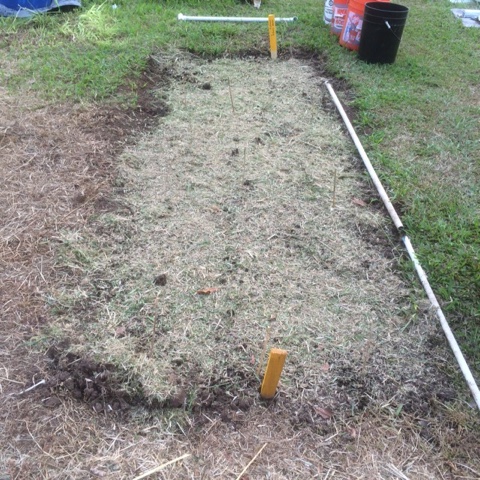 Below is a close up photo to show that the mulch is light. It's not even a layer. The soil shows through in places. Usually 2-3 days later I will need to apply a little more mulch because the green grass dried out and shriveled up. If the seeds were large, such as peas or beans, then the mulch can be a little heavier. But if the seeds are small, such as beets or spinach, then the mulch must be very light. I have another technique I use with fine seeds and I'll describe that two posts from now. 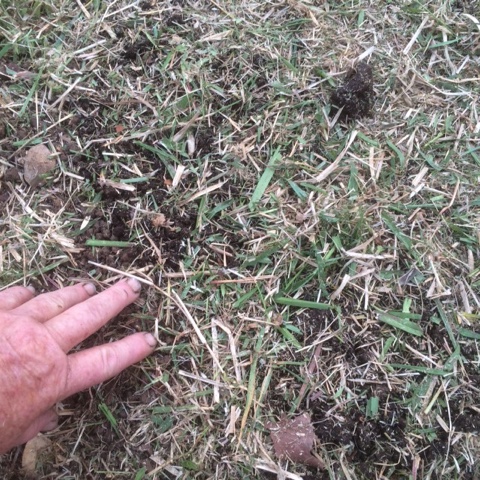 I prefer to keep soil covered so that the sun and wind does not dry it out. The past two years with all the rain, that wasn't an issue. But the weather seems to have changed these past three weeks and is returning to what I tend to say is "average/normal" for my location. Thus I'm back to keeping the ground mulched. Lightly in the beginning, heavier as the crop grows.
Posted by Su Ba at 9:42 PM