New Pest on the Beans

Went out to pick green beans today and discovered some damage. Taking a closer look I came upon these...... 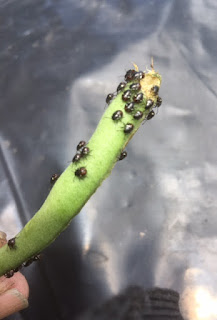 Looking even closer, I saw damage on several plants. Geeez, yet another pest to battle.

What is it?  When I squished them they smelled distinctly of stink bugs. Ok then, I've got a black stink bug of some sort. A couple of years ago these pests were about 5 miles away down the road. So they've finally travelled those 5 miles and have ended up at my place. Drats.

The first thing I did was locate every black little stink bug and squish them. While that won't really solve my problem, it at least made me feel like I was doing something. For today, there are no stink bugs on the beans.

Next, I'll need to find something effective against them. There's the old stand by, soap solution. Or soap & vinegar solution. I also have diatomaceous earth and neem on hand. I'll check to see if I can control them by simply knocking them off, or vacuuming them up. I'll try making a bug juice spray, though that means collecting a bunch of stink bugs. So I'll be doing a bit of experimenting to see how to control these pests.
Will I resort to chemicals? If need be. There are a few organic approved options that I would try first. But if things get serious, then I'd most likely just shift my growing practice and grow beans with a protective row cover over them. Since beans are self pollinating, I would have no fear excluding the bees. I'd still get beans. And crop rotation is another option. Simply move the bean beds around, trying to stay one step ahead of the bugs.
Posted by Su Ba at 11:22 PM

Email ThisBlogThis!Share to TwitterShare to FacebookShare to Pinterest
Labels: Pests