Here's an update in the new pup. Many people have been asking about him.
Noodles is now a "big boy" puppy. He's 6 months old, so he's got an adult sized body with an eight week old's mind. Sometimes that's challenging to deal with. He frisks now more so than when he was younger, so it is hysterical to see this big goof gallouping about, crashing into things. He doesn't seem to get the hang of his ever growing dimensions ... longer legs, taller size, wider shoulders. Just this morning he crashed running up the hillside stairs, legs akimbo, flipping himself off the side. Not a rare occurrence, he crashes at least once a day! And just recently he's added whacking his head as he runs under the house. He hasn't quite adjusted to his increased height either. And he still tries to take a shortcut by running between the furniture and the wall, but he no longer fits. He either gets wedged, or pushes the chair or table out toward the center of the room. 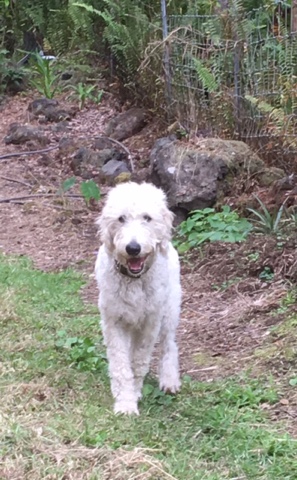 Noodles fits his name. Just try picking him up and see what happens. It's like picking up a pile of cooked spaghetti. The pup's legs just melt out from under him, his neck flops, his whole body goes noodlely. You can imagine the challenge of picking him up to put him into the car. Thank heaven he jumps in on his own accord nowadays, but there for awhile it was an interesting endeavor. And every time I brush him he "goes noodles".  He gets his legs, chest, and belly brushed more frequently than his head and back, only because that's what gets presented to me. 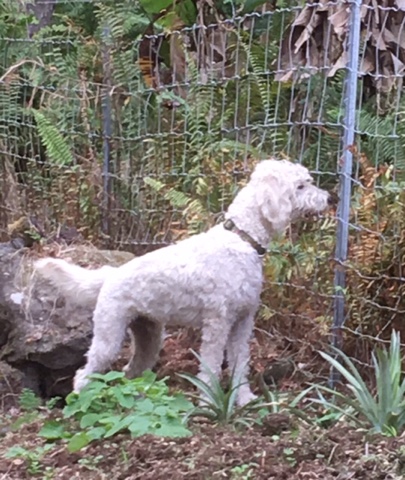 Above, he looks quite grown-up after his first haircut. 3 inches of puppy fuzz got changed into one inch of neat, tight wave.
So what sort of nickname can you give a puppy called Noodles? Noods? Yes, I've caught myself calling him that in public, and yes, I get some strange looks. Kinda funny. But he's acquired a few other monikers : Noodle Boy, Alligator Mouth, and Poindexter. Ok, why Alligator Mouth? He is a very mouth oriented dog, having Labrador in him. So he likes to gently grab and hold things...toys, sticks, often our hands or wrists. On top of it, he has the long narrow snout of the Standard Poodle. He very much reminds one of a gentle alligator. 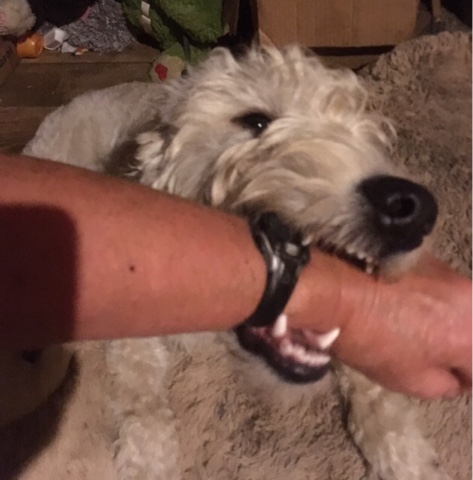 So why Poindexter? That's an odd one, right? Well, we have a friend who thought Noodles was a cute puppy name but not appropriate for an adult dog. She suggested changing his name to Doodles when he grew up. She was serious!  Frankly, we like Noodles and it fits him perfectly. But it did put the idea into our heads about a more sophisticated name. Don't ask me why, but the name Poindexter struck a cord with hubby. This pup has been more of a studious, nerdy puppy compared to others we've raised in the past, so it's apropos. Now, whenever we want to talk about him but not let him know it, we refer to him as Poindexter. He already knows that Noodles, "the puppy", and "the dog" involves him in some way, but he hasn't caught onto Poindexter yet.
Every night Noodles sleeps with a pile of his stuffed toys. And brother, he's got quite the collection. 18 all told! And he remembers every one of them. Plus has special assignments for them. The red moose, pink monkey, and white cow are taken outdoors for playing with. Every time I bring them in, out they go again. But none of his other stuffed toys are taken outdoors. Never. Six are living room residents. Six are bedroom residents. Plus the golden monkey and rope snake can end up anywhere. I guess they are "free agents". It is really strange that he designates where his toys stay stashed.
Each night he sleeps in a crate in the bedroom, atop a pile of stuffed toys. He's probably old enough to start sleeping out of his crate now, but he automatically enters the crate on his own accord. So I'll let him keep the habit for a while longer until such time that he decides he wants to try sleeping with his best pal, Crusty. But during the day he naps out in the living room. He's got his six toys there, but he's also got something special that he sleeps atop.....one of the jumbo Costco teddy bears. 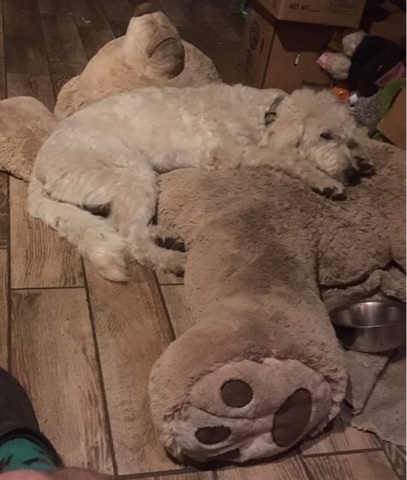 We've never seen him nap anywhere except atop his toys, or now, his giant teddy bear. Yes, it was his Christmas present from Santa Claus.
We've grown quite fond of this pup. He's turning out to be a good one. He's been an extremely easy pup to raise and train. He's constantly happy and optimistic. And just recently starting to show watchdog tendencies -- perhaps an influence from Willy, the farm guard dog. Oh yes, while Crusty is Noodles BFF (best friend forever), Willy is his early morning playmate. Noodles has put some spring and energy back into old Willy, turning him into a younger dog again. Nice to see them play together. 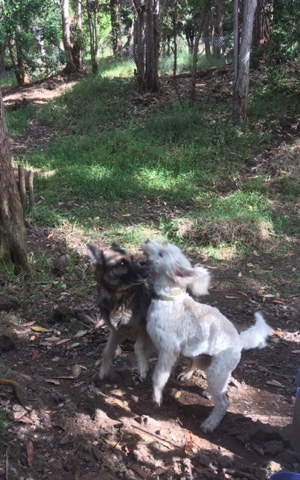 Noodles is coming along and looks destined to becoming one really fine dog. We surely lucked out getting him. He's the ideal puppy for two old people to raise.
Posted by Su Ba at 9:27 PM

Email ThisBlogThis!Share to TwitterShare to FacebookShare to Pinterest
Labels: Dogs