Changes to the Big Pond

I've never quite finished up my big pond project, and last week I decided to tackle it again. Up until now, the pond essentially has been in the shade almost all day. That encouraged lots of moss and fungus to grow on the bridge, weakening the two long logs that supported the bridge walkway. Those logs were two eucalyptus trees, a wood I have since learned was not a good choice for the job. But they are free and handy, since they were growing right at the pond site.
Every time it rained, the bridge was way too slippery to walk across safely. It was constantly covered in a thin film of moss and algae. Plus, the 2x6 boards I used for the walkway had been recycled, so they were close to 20 years old now. Many were showing signs of rot here and there. Time to replace them for safety sake.
The first job was too remove the weedy and misshapened trees. That opened up the pond to some sun, which should help control the moss and fungus. 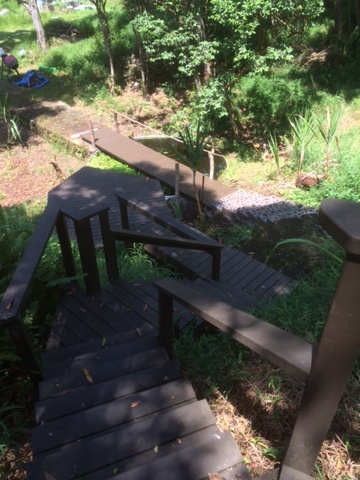 (Above.....looking down on the pond from the hillside steps. Trees removed.)
Next, the steps that has been made out of tree trucks had to go. They were rotting into soil from being constantly wet for the past two years. I'm not exaggerating. They never dried out. I saw dozens and dozens of mushrooms sprouting from each one! Shame they weren't the edible kind. So they were replaced by concrete steps with imbedded rocks. Below, Crusty approves of the new steps. While the log steps were woodsy, cheap, and farm sourced, these cement steps will be attractive, give safe footing, and last a lifetime. At least the rocks were farm sourced. 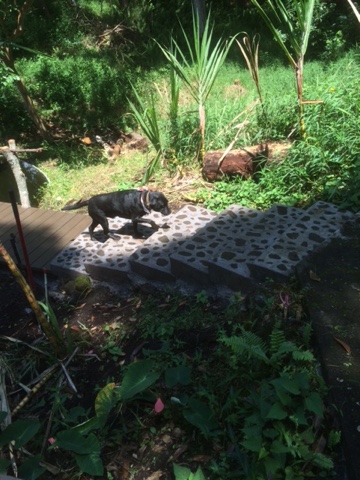 I recently acquired some 24' long 4x6's from a friend at a very good price. Plus numerous 2x6's from another friend who had bought them years ago but never built the deck he had planned. The lumber came in handy for making the bridge supports and treads. I used three of the beams to support the 4' wide 2x6 planks. Ah, this bridge is now strong and should last a good 20 years or more. The cutesy handrail is just for show. It's too flimsy. Eventually I'll find the right tree to make a sturdier handrail. The railing posts are made from ohia trees this time, a much better choice. 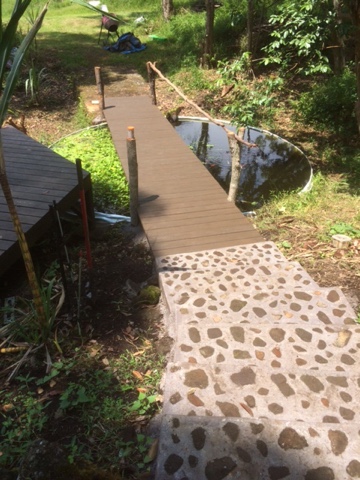 The pond hosts hundreds of mosquito fish and a few dozen guppies, and 9 young koi. To offer the fish shelter, over half the pond is shaded via plants or the bridge. For the next week I'll be keeping an eye on the water temperature and watch the fish's behavior. If the water gets too warm, I'll be adding more plants to shade it more. 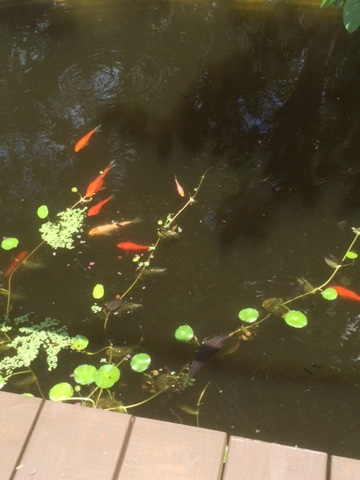 Here's 8 of the koi fish. No matter how long I tried, I couldn't get all 9 in one photo. But 8 is pretty good considering I'm working with a bunch of fish. The largest one is 7" long. The smallest is 3 1/2". When they were purchased they were only 1 1/2" to 2". Their job in this farm is to eat the cane toad eggs and young tadpoles. Last year they were too small to get the job done, but this year they have been 100% successful so far.
Those pond plants are pennywort and azolla. I've been confining the plants to 1/2 of the pond, harvesting the excess growth. But I might encourage it to cover 3/4 or more of the pond if more sun protection is needed. Both are useable as fodder for the livestock, though often I simply dig it into the garden to add  nutrients to the soil. Now that the pond is getting sunlight, I might add a few water hyacinths for color and foliage variety.
I have two more tasks to get completed.1- Put up the wood edging around the outer sides of the pond. Purely for asthetics. 2- Scrub down the hillside stairs and reapply a coat of stain. It's time for maintenance. At the same time I will apply grit to the treads to address the slippery factor.
Posted by Su Ba at 9:23 AM

Email ThisBlogThis!Share to TwitterShare to FacebookShare to Pinterest
Labels: Pond