The homestead is home to 11 Muscovy ducks now. 2 came from the community garden project and were relocated to my place when the garden group changed their location. The others came from a local mini farm who decided the get out of keeping ducks. 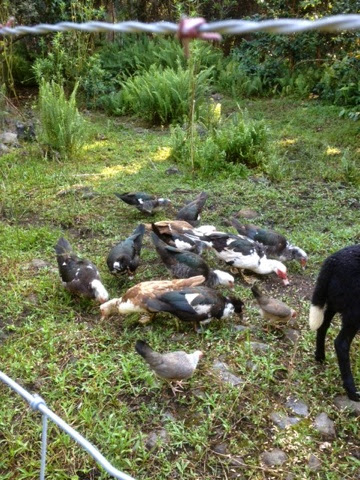 The small flock consists of one very, very happy drake with his band 10 females. The guy couldn't be happier.
Why go with muscovys? Availability is the number one reason. Right up there with number one is the fact that they are not noisy. For the sake of the neighbors and my own peace, I didn't want noisy ducks. Plus muscovy ducks lay nice eggs, are good mothers, and are a good duck for eating. Another major plus is that they don't require a pond, though they enjoy a small tub for bathing. They are good foragers and are known to do well in Hawaii.
Initially I had the ducks in the front pasture. But that pasture is gradually being converted to gardens. So the ducks needed to be moved. The garden could handle one duck, but a band of ducks would some eat everything green. So the ducks were rehoused to the middle pasture, a good 700 feet from the garden area.
All went well for two weeks. Then this morning I found a group of ducks down by their old pen. 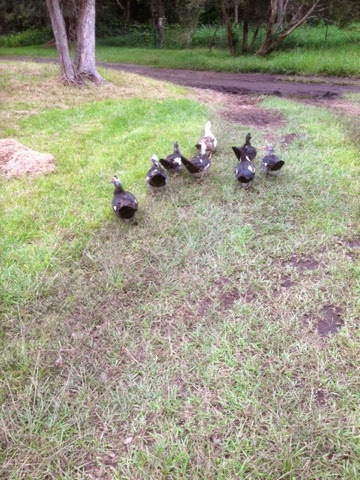 Darn. Breakout! A quick investigation showed that they found some wide gaps in the gate fencing and had simply walked on out. The drake and the biggest female couldn't fit through. A bit of plastic bird mesh attached to the inside of the gate fixed the problem. Now to get the wayward ducks back.
Herding Muscovy ducks isn't all that difficult. If not spooked, they prefer to walk. And pressuring them just a little bit got they walking back toward their pasture. But I quickly hit a snag. A puddle! They walked through the puddle, then circled back. Took baths, drinks and did some splashing. Every time they started walking off, one would decide to hit the puddle one more time causing all of them to make a break for it back to the water.
Out of the blue, a knight is shiny armor (that is, an elderly, mostly deaf, somewhat crippled Border Collie) arrived to save the day. 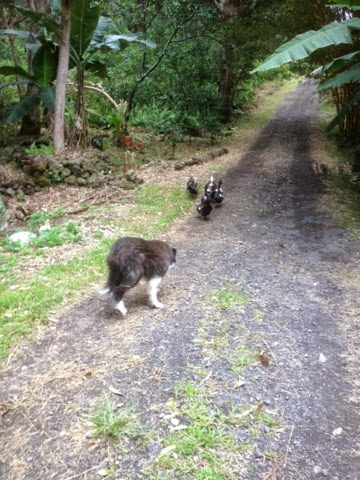 The old Colliewobbles got those ducks rounded up into a tight flock and moved them right away from the puddle. Without one command from me ......which wouldn't have done much go anyway since the dog is deaf.....she pushed them all the way back to the pasture. 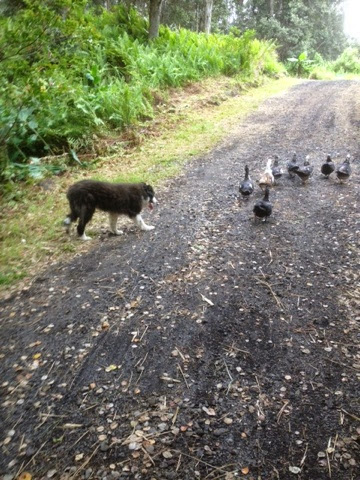 She even held them as a group while I opened the gate, then moved them into the pasture. Wow, what a dog! The old Colliewobbles is 15 years old now and far too crippled to work sheep. But these ducks were right up her alley -- slow and in need of herding.
Posted by Su Ba at 12:39 AM

Email ThisBlogThis!Share to TwitterShare to FacebookShare to Pinterest
Labels: Ducks