I realized something tonight....I seldom go outdoors when it's dark. I suppose that's a habit carried over from my childhood. I grew up in a city, so nighttime wasn't all that safe. As a result, I seldom felt comfortable outside when it was dark unless I was with other people.
Since moving to "the country", I have been losing my fear of the night. But I seldom stray from the area around the house. So tonight I took a walk around the homestead. Well let me tell you, the animals weren't pleased by my odd behavior. The dogs barked at me. The sheep were spooked. The hens muttered on their roosts. Several rabbits thumped their feet in alarm. The piglets woofed and gave me that deer-in-the-headlight stare. The only ones curious were the cats. As I strolled about, in had a retinue of half a dozen cats following me. Guess they were trying to figure out what I was up to. 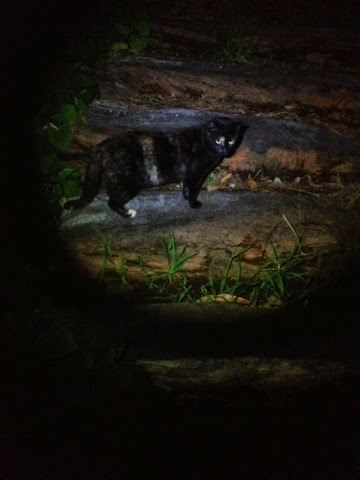 (Above, Becca illuminated by the flashlight.) 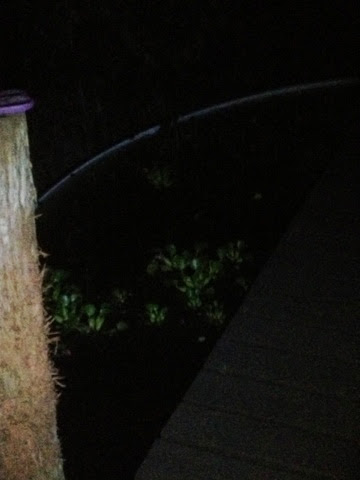 (Above, the pond as I walked past. No fish in sight. Just pond plants serenely floating on the surface.)
There was no moon tonight so it was really, really dark. Even after my eyes got accustomed to the dark, I couldn't see much without the flashlight. But I discovered that the farm is really lovely at night. Quiet except for a few insects and a cane toad. And home to some nightlife -- a spied a bat, a barn owl, and several night geckos and moths. I checked the garden for slugs and was pleased to see there weren't scads of them. Slugs are one form of nightlife I could do without. I looked into the pond (photo above) but didn't see anything moving. And though I know that rats, mice, and feral pigs prefer the night, they were leery enough to stay hidden from this blundering human. 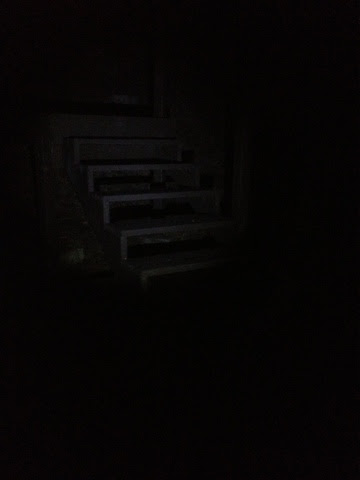 After a 30 minute stroll, I still couldn't make out any land features without the flashlight. Checking the sky there wasn't a star to be seen. My personal night vision was zilch. If the flashlight failed, it would have been a challenging situation with me being a novice night navigator. Boy! I would have been in need of a seeing eye cat! The above photo is of the steps leading up my hill. Barely visible until they were in the full flashlight beam. 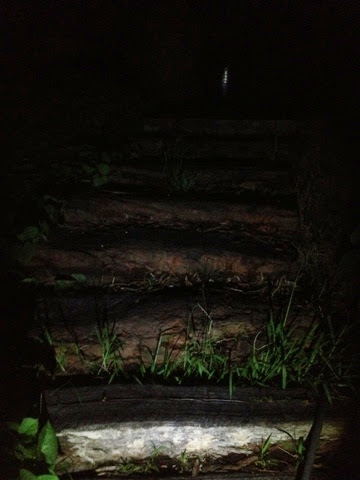 By the time I started climbing up home, I realized that I had become relaxed with a lovely aire of peace about me.  I was really getting into the relaxing night thing. This night walking turned out to be quite nice. Carefully climbing the log steps up toward the house, I looked up to see the house lights. They seemed out of place in the darkness that surrounded me...... 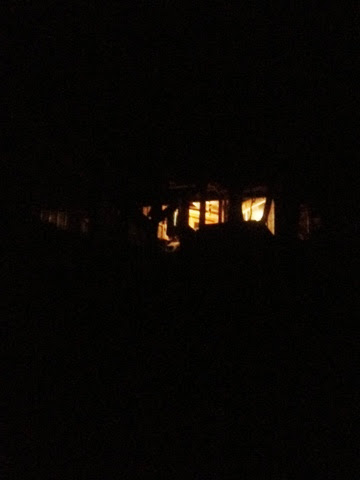 Almost to the top of the hill stairs I stopped to take a photo of the welcoming house door. Hubby had put the porch light on when he noticed that I was returning. 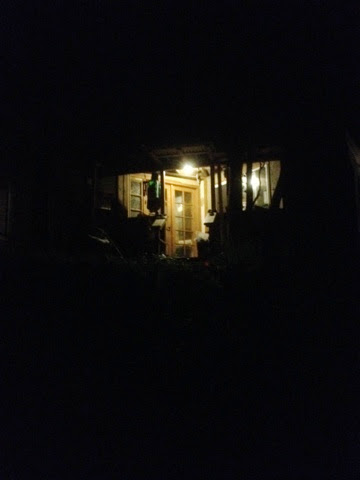