Ka'u sees quite a mix of people. All of the state is a general mixing pot of ethic groups, and Ka'u is similar. Our local blood includes Hawaiian, Japanese, Chinese, Portuguese, Filipino, various South Pacific groups, various European types lumped together as "haole". Add a few North American Indian, some Puerto Rican, Mexican, other Central American, and a smidgin of African. Now swirl it all around and that's what the children look like. Happa this, happa that, happa the other. Even the people who call themselves Hawaiian usually have some sort of Japanese or haole blood in their background. 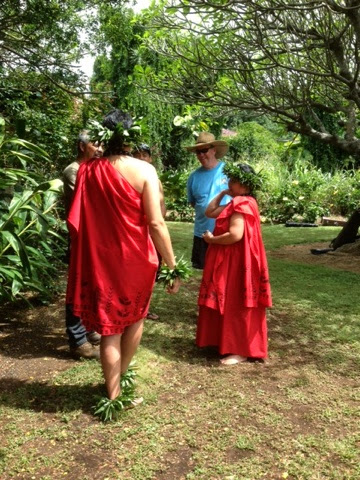 Culture-wise you'll see families/communities of everything from local fishing/hunting families, to ranchers, to independent businessmen, to retirees. From artists, to old hippies, to society dropouts, to young back-to-earthers. Basically what you won't see are the urban types, the wealthy, the techies, the over achiever types. Ka'u is far too rural for those to be living here. 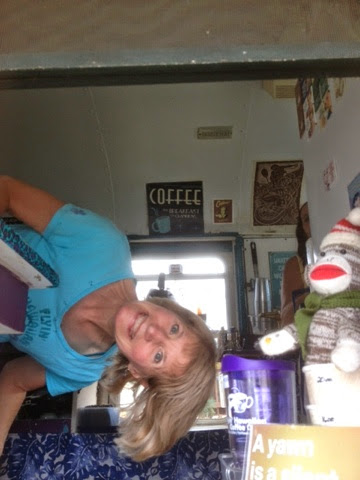 (No the photo isn't sideways. Judy operates the local coffee truck and is just hamming it up for the camera.)
Ka'u has a reputation of being peopled by a population that is a tad crazy and a tad independent. People here seem to be proud of that. Even one of the county's past mayors publicly noted that the crazies run south! Yup, that's us. And we're generally tolerant of the crazies as long as they aren't violent or criminals. 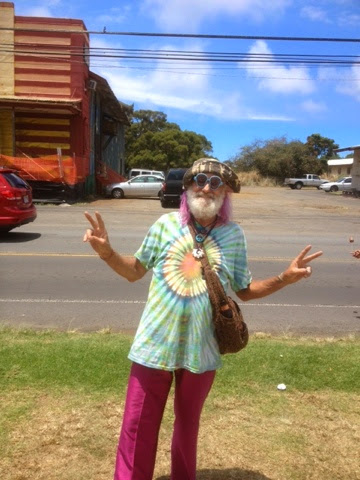 Society dropouts and misfits are attracted to Ka'u for some reason. They drift through, discover that they're not the craziest people around, and that they are accepted at face value. They often find a place to settle down here. 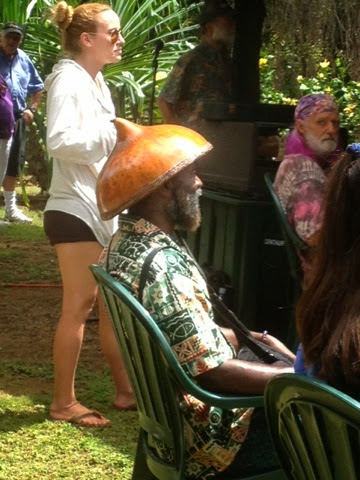 We have all types of oddballs here. I like to think of them as local color, of life's characters. I've always been drawn to people who are a bit strange and interesting. Perhaps this is one of the reasons I liked Ka'u when we were looking for the right place to settle ourselves. 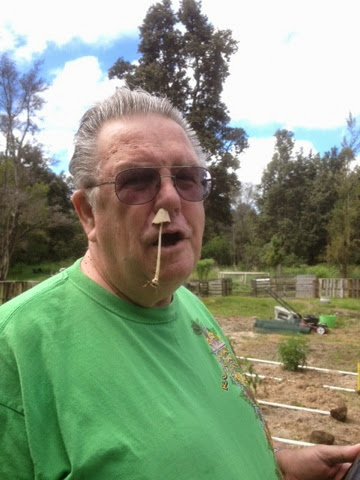 (Jeff is a very colorful character! One great guy.) 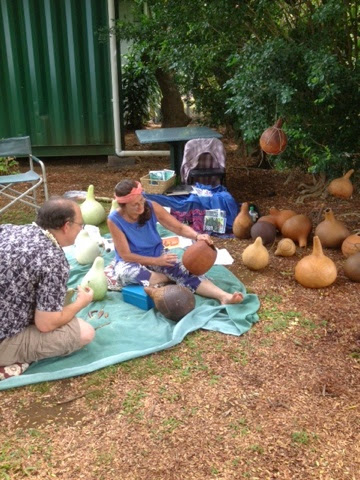 Artists are also attracted to Ka'u, so you see quite a few here. They work with all sorts of art....fabrics, gourds, glass blowing, painting, woodcrafting, rock carving, ceramics, music, dance, more. I find artists to be fascinating. They surely see the world differently than I do. I have a tiny spot in my soul that would have grown into an artist if it had not been stifled as a child. So looking at the artists makes me feel that I'm some way looking at my alternate life's path. 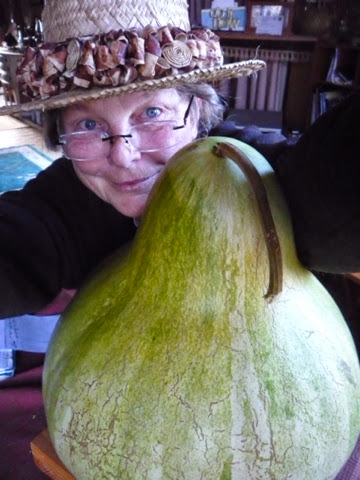 Above is Sue J, our local award winning gourd artist with one of her gourds, which she will eventually carve and dye, creating yet another fabulous art piece. Take a gander at her hat. Isn't it great?!!! 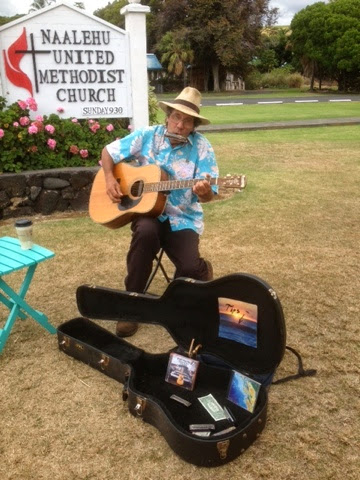 Some of our grand characters come in packaging making them difficult to recognize. Many of the best I almost missed discovering. 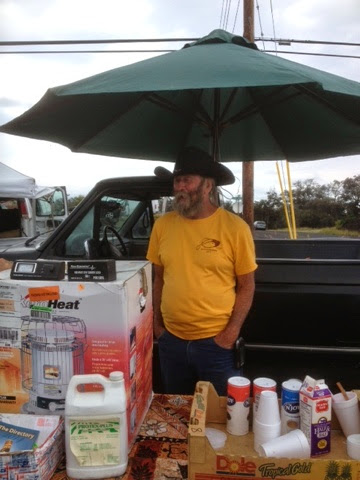 Dennis, above, is an amazing person. Jack of all trades. Knows everything that's going on in Ka'u. Runs one of the local swap meets. Doesn't care about image. A heart of gold and willing to help. No, he's not perfect. And life hasn't been easy for him. But he is Ka'u color through and through. 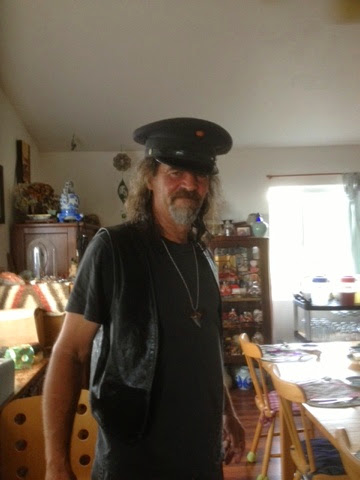 John, above, is another gem. Retired from the Smithsonian Institute (yes, the Washington DC one!), he has set up his home like a mini museum. Far better than the real Smithsonian because you get to touch and handle the collection, plus get the story behind each piece. But museum aside, John himself is the real treasure. 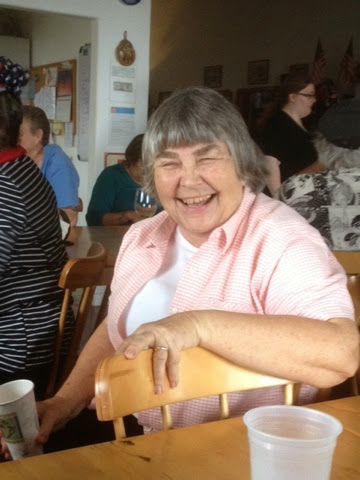 Above is Diane, who has the best laugh in the whole district. I feel really honored to share time with her. What fun!
One other thing of interest about Ka'u people. While at first impression we don't look like an educated bunch, the truth would surprise you. Yes, the local level of public school education is pathetic but many young people go elsewhere for higher education. Plus many transplants held educated job positions before relocating here. So that rancher on a horse pulling cattle down off the mountain has a PHD in literature. For real! The old hippy living way back in the hui once was a highly respected tenured professor. The coffee farmer selling at the town market might very well have a masters or be doctor that left the rat race. I'm was amazed to learn of the number of folks with phd's, masters, bachelors, or their equivalents in experience. And the number of doctors who now raise sheep, grow coffee, have fruit orchards, or fish for a living.
There are plenty of Ka'u people that could be mentioned here, but this blog isn't suppose to be a tome listing all the interesting people. Ka'u is full of them.
Posted by Su Ba at 11:51 PM