Donkey pulled a fast one on me. But with some McGyver-like thinking, I avoided disaster and saved the day.

For the past many months, Donkey (now known as Don Quixote) has been in the front pastures up by the road. Multiple times a day people go in & out through the gate. Donkey watches, never makes a move. Just watches. Up until now. As usual, I climbed out of the truck, opened gate, went back into the truck to pull through. Donkey no longer waited. As slick as an ell, she slipped through the gate past me and headed down the road. Yikes!!!!!!!

Without a second's delay, my mind whirled into high gear.........what sort of food or treat to I have on me to entice her with? Do I have a leash or rope? Will Donkey be friendly or go bezerk-o returning to her feral ways now that she is loose? I quickly determined I hadn't a blessed thing edible in the truck, but one of the cat feeding stations was beside the gate, which was close by. So I grabbed a jar of dry cat food and headed to intercept my wayward beast. Luckily the green grass along the roadside caught her interest. She'd grab a mouthful, then take a few more steps. Stop for another bite, then walk on a few more feet. The grass was slowing her progress down. So calmly but briskly walking on the opposite of the road, I was able to get ahead of her within 30 feet of her wayward journey. I shook the cat food jar, catching her interest. She almost took the bait, but decided to walk on and eat more grass. So I walked ahead again, offering the handful of cat food to her. She allowed me to come up within 3 feet of her before she said, "Nope, not yet." Off she trotted to my neighbor's driveway entrance. Luckily a tall weed caught her attention. I let her grab a big mouthful before again approaching and offering cat food. Now her curiosity was piqued. She checked out the offering, found it to be acceptable, and began munching. Carefully without being obvious, I sidled alongside and rested my arm around her neck. Gotcha!

Ok, what next? I needed to lead her back. At this point Donkey had totally lost interest in the cat food. She knew she had been had. But her training about halters and leading kept her from pulling away from me. Good donkey! She had learned her lessons well. Now, if only I could lead her in some fashion. But I had nothing.  No rope. No string. No wire. Only the clothing I was wearing and a jar of cat food. Getting her to follow the cat food wasn't working, and believe me, I tried! So I had a very big dilemma on my hands and not a soul in shouting distance to call for help. Plus of course, my cellphone was sitting in the dashboard of my truck. Bad luck. Big sigh.

I tried using both hands to act as a halter to guide her home, one on her poll and the other under her chin. Nope. I tried the poll and nose position. Still nope. Donkey refused to take a step. Looking over what I was wearing, I noted croc clogs ( no laces), shorts, t-shirt. The thought crossed my mind that I could take off my t-shirt and make a halter out of it and just pray that no car came by. Oh, oh, oh. I just remembered....Today I'm wearing a shirt that's on the small side, so I wore a bra. Most days I don't bother with one (one of those things you do when you're either very young or quite old), but today I wore one because of the tight shirt. Ah-ha, I'm saved!!!! Keeping one hand on Donkey, I slipped off the bra and made a makeshift halter. Donkey accepted the idea and docilely allowed herself to be lead back home. Disaster avoided! Relief! I was one very thankful and relieved person. Of course the bra is ruined, stretched beyond recovery. But it served me well, may it rest in peace. 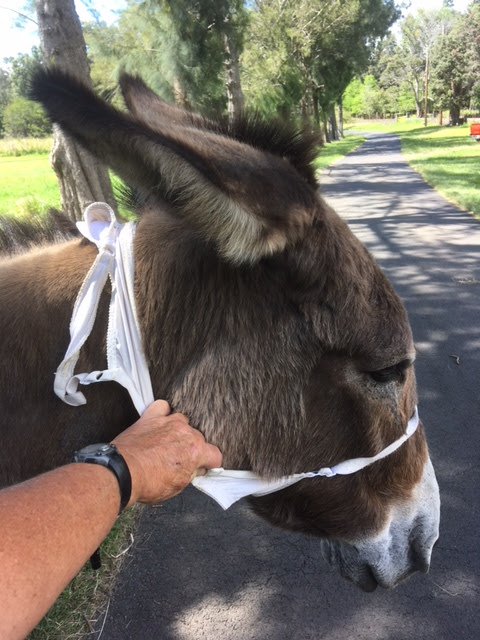