..."the rabbit died"
Before pregnancy tests could be purchased at the drugstore, determining if a woman was pregnant involved injecting a female rabbit with the woman's urine, then several days later killing the rabbit to look for changes in its ovaries. The rabbit ALWAYS died, but somewhere along the line the idea of the rabbit dying became synonymous with pregnancy, not just the test. Thus if a woman was pregnant, one would say, "The rabbit died."
...lucky rabbit foot
Carrying a rabbit foot in one's pocket was thought to ward off evil spirits and thus bring luck. Not so lucky for the hapless rabbit. 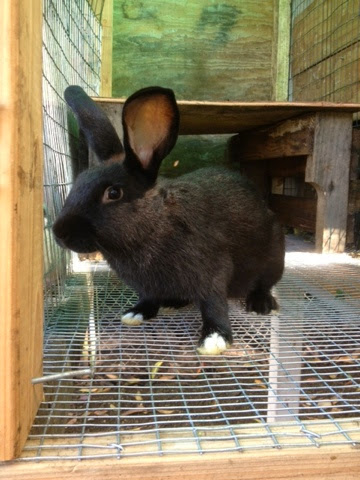 ...rabbit, rabbit, rabbit
Said three times upon wakening on the first of each month, it was suppose to give you luck. I think I got this from my grandfather who was born in Edinburgh, Scotland and lived part of his childhood in England. While my great aunts said "rabbit", grandpop said it should be "white rabbit" because it was the rare white rabbit that was lucky.
...only eat rabbit in the months with an R in it.
This most likely applied to wild caught rabbit and probably had something to do with parasites being most prevalent during the summertime. Our ancestors had to deal with parasites and diseases without the benefit of modern medicine, so anything they could learn about keeping healthy could be important. But alas they lived with many misconceptions too. Today's domestic rabbits are fine to eat anytime of the year. 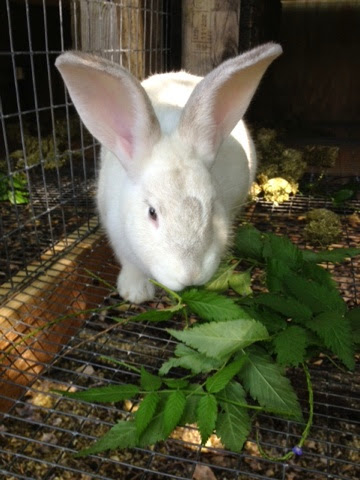 ...white rabbits are deaf
Not true. I've overheard people say that the pink eyed white rabbits are blind. Also not true.
...cabbits are a cross between a cat and a rabbit
There is no such thing as a cabbit.  Cats and rabbits cannot breed together and produce any offspring. If you see a hopping tailless cat, it has a deformity, most likely spinal bifida.
...rabbits live off eating carrots
"What's up, Doc." Sadly, many baby pet bunnies have died because of this myth. Rabbits are primarily grass and herb eaters. Roots, veggies, and fruits make up a small potion of their diet.
...domestic rabbits can breed and produce babies with cottontails and jackrabbits (a hare).
False. While they might mate, they cannot produce offspring. I've had people swear that they breed domestic rabbits and cottontails together, but it's simply impossible to get baby rabbits from such matings. 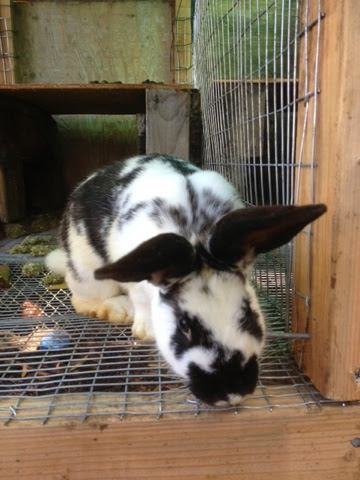 ...A female rabbit has two uteruses so she can be pregnant with two litters at the same time. She will give birth to one litter but hold off on the second until the first is weaned. Thus she can produce multiple litters from one mating.
Partially true. The female has two uterine horns, each with its own cervix that joins the vaginal body. The organ looks like the letter Y. A pregnant rabbit usually has fetuses present in each horn. ALL the fetuses are born at the same time. None are held in reserve. Therefore the doe doesn't produce multiple litters from one mating. But add to that the fact that she can get pregnant again if mated right after giving birth, it just seems like she has a second litter ready to go inside her already.
...pick up a rabbit by its ears
Ouch! No way! While gently holding their ears might help calm some rabbits while being held, absolutely no way should they be picked up or restrained by their ears.
There's probably plenty of other myths and misconceptions about rabbits out there, but these are the ones I've heard most often.
Posted by Su Ba at 10:01 PM