I've been fairly quiet this week because I've been rather busy. The kukui and macnuts are dropping, so I've been busy processing those. Plus there's lilokoi to juice. I've been grooming some spots around the homestead to plant pipinola, winter squash, and pumpkins. But the biggest project has been expanding the rabbit hutches. 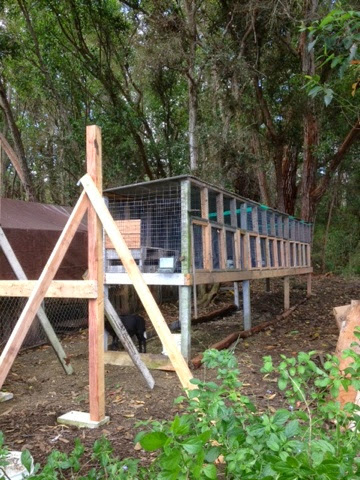 I've got 16 young rabbits. So far I've got 13 individual hutches. So looks like I need at least 3 more, but I'd like to have a few extra empty ones. Yes, that's a lot of rabbits, but they aren't here to be pets. Their number one reason for being part of the homestead is for meat. Second is manure. Third is for selling some to other people. 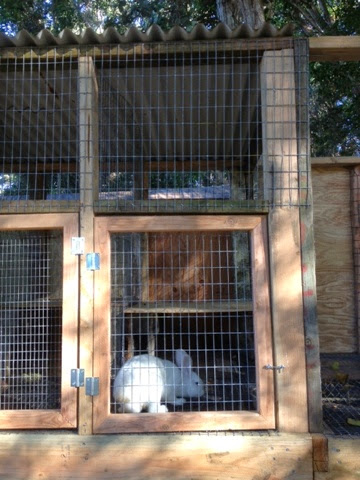 Each rabbit needs it's own space when confined. Rabbits can be raised in colonies, but they are near to impossible to individually monitor that way. Plus a lot of space needs to be provided in a colony situation in order to prevent hostility. They have been known to kill one another in fights and murder entire litters. Besides, here in Hawaii rabbits are not allowed to be housed on the ground, so that pretty much rules out colonies without an expensive concrete pad.
I'm providing each rabbit with 14 square foot of hutch space....a 2'x5' floor and 2'x2' lounging shelf. 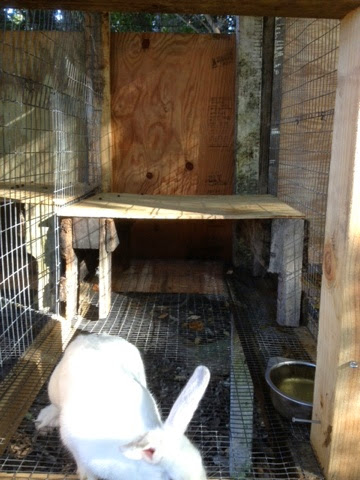 The shelf gives them a little "den" for privacy.
Right now the rabbits have to stay in their hutches, but I plan to build some grazing pens. The floors of those pens will be wire mesh that the grass can grow up through, but it will keep the rabbits up off the ground and prevent them from digging out. Plus importantly, it will prevent mongooses from digging in. I'm not sure yet what the dimensions will be, but I'd like to give the rabbits a chance to hop around and do whatever rabbit behavior they feel like doing--- except for digging out. Sorry Bugs, no digging here in Hawaii. So I'm thinking along the lines of 3'x20'. I'll build one then see what the rabbits think about it before making any others. If the adults aren't impressed, then it will still make a fine weaning pen.
By the way, well over 50% of the lumber for the hutches is reused material that I've been saving, just waiting for a project to be used on. I used cut up pallets to support the lounging shelves. All the metal roofing is old used pieces but I am using a couple panels of new green fiberglass roofing because I didn't have enough old roofing to do the whole job. All the wire mesh is new. Some of the hinges and latches are used stuff but I had to buy some new because I needed so many. The bunnys' water bowls are all what-not items bought cheaply at yard sales.
For right now, the manure falls to the ground under the hutches. I put some logs around the bottom to keep the chickens from scratching the manure all over the place. I don't mind them picking out bugs and worms, but I want to collect that manure for the garden.
Posted by Su Ba at 10:35 PM