The two baby piglets are growing. They are too strong and wiggly now for me to weigh, but I'm sure they have tripled their weight since they arrived. 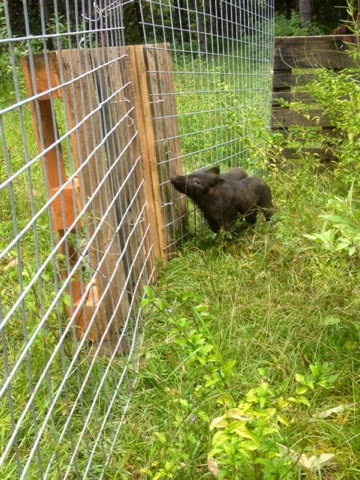 I've been using temporary fencing for making their pen so that I can shift them to new locations. This arrangement seems to be fine with baby pigs but probably wouldn't work for adults. When these guys get too big I may need to run a string of electric fence in order to keep them from rubbing themselves along the fence, thus knocking it down. We shall see what happens as they grow.
That are already in their second pen, having thoroughly rotorooted the first one. The beauty of encouraging them to root is that I'll be able to turn their old pens into garden areas. Let them do the tilling, weed eating, root and rock removal. 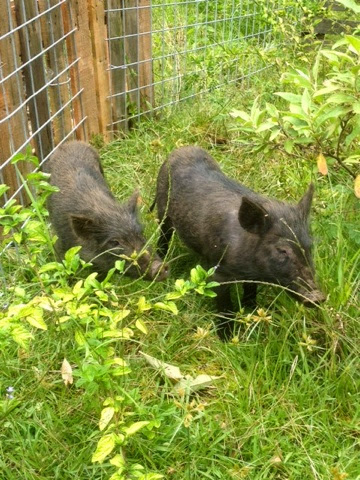 Both these piglets are mostly feral Hawaiian pigs. There's a tad of domestic, but obviously not much. So their instinct is to be spooky and hyper alert. And smart! They are quick learners, coming when called. They don't like being touched or scratched, but tolerate it as long as there is food in their bowls. 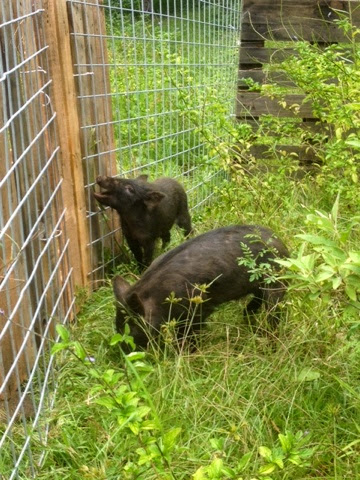 When I let them into their new pen, they were fun the watch. Sampled the grass. Sniffed everywhere. Then broke out into a wild game of tag. They ran, darted, faked turns, jumped over each other, barked and huffed. Such joy! Like watching puppies play chase games.
This pen, which is 15' x 15' should last them about 3-4 weeks, I'm guessing. Then I'll have to move the panels and their doghouse to the next location. I'm just assuming that as they grow bigger that they will go through a pen faster each time.
Posted by Su Ba at 2:44 PM

Email ThisBlogThis!Share to TwitterShare to FacebookShare to Pinterest
Labels: Pigs