This hurricane has been an interesting lesson. Lots of people had said that Mauna Loa would deflect a hurricane. Many others, including all the weather people, said the volcano wouldn't affect a hurricane. Now Iselle is showing that the truth is somewhere between those two extremes.
Up until late last night, the predicted path showed Iselle making landfall and crossing the island at Volcano. This would have had the hurricane crossing directly over Mauna Loa. But Mauna Loa proved to an immovable object that somehow affected Iselle. According to radar, the shape of the hurricane sort of splated when it met Mauna Loa. The course changed and now Pahala became the official landing zone. That's quite south of Volcano. Iselle slowed in its path dramatically, then started to reorganize and go on a path wrapping south around Mauna Loa. So now instead of tracking north of Mauna Loa and up the Hilo side, it is oozing to  the south and heading to go south of Kona. 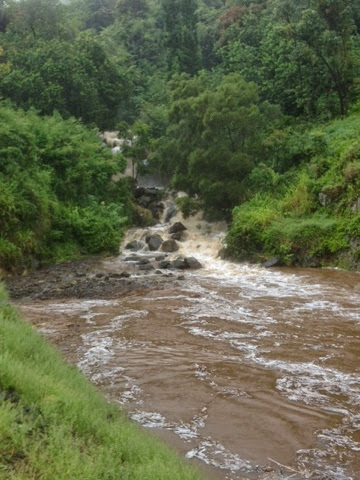 (Above, runoff from the mountain down a dry gulch. This gulch seldom ever sees water, only in the heaviest rains.)
Because the storm is traveling so much slower than predicted, rain amounts will be higher than projected. As of 9 am, I already have 8.8" of rain at the homestead. According to the radar, rain will continue for a couple more hours but I don't know if it will be heavy or light. 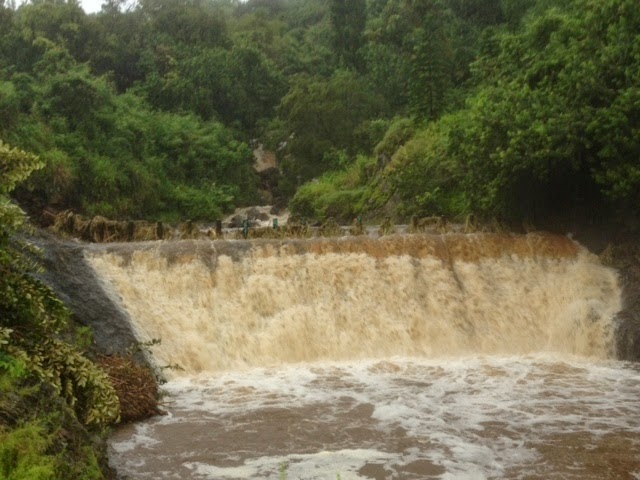 (Above, looks like a natural waterfall, right? No, it's just rain runoff. Water from the rain is being diverted into a culvert that prevents flooding.)
As of 9 am, there hasn't been a breathe of wind. Just about 9:30 the tree branches started to very gently move. So it looks like we could get some wind from the back part of the storm, maybe. The center of the storm is passing our area as the storm is reorganizing and starting its path out to sea. 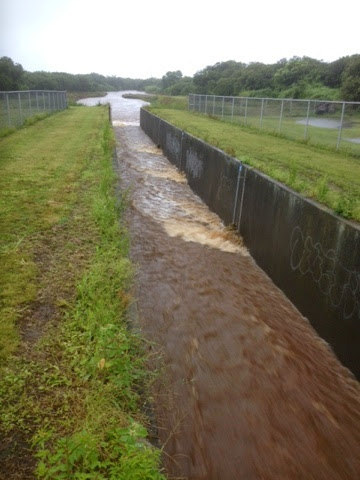 Above, water runs down a culvert, emptying out onto the field beyond. No, that's not a stream or lake. It's normally dry grass. From the grassy area the water will flow out into non-used land where it will seep into the lava lands. None will reach the ocean on the surface. 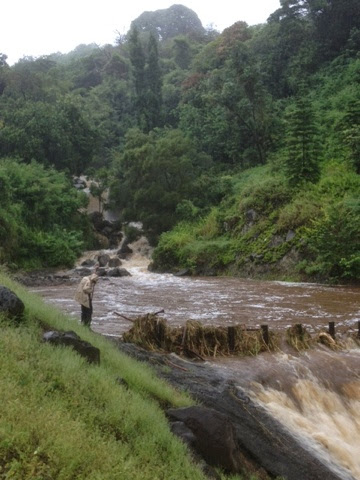 I ran down into town this morning at 7 am and hardly a soul was around. Lots of emergency trucks cruising around looking for trouble, but the town was quiet. The only people I saw were out taking photos. No trees down anywhere. Just a few spots where water had been flowing across the highway. 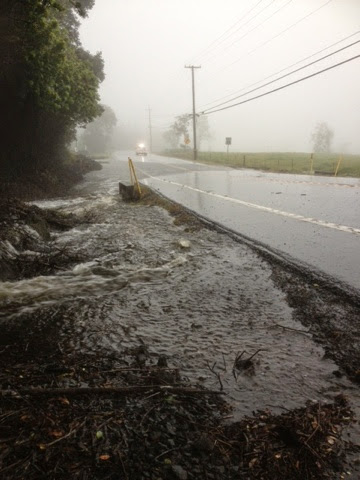 Nothing serious so far. Not out of the usual for a heavy rainfall. Frankly, I've seen a LOT worse in the past.
The culvert in town was draining a lot of water. Lots of soil in the water. 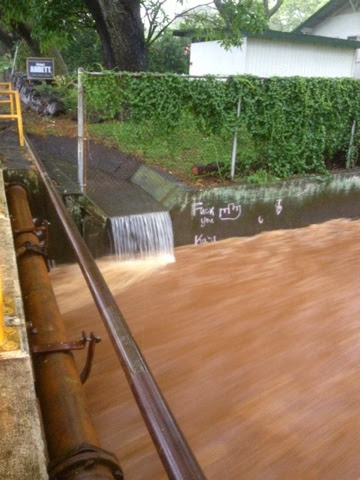 One of the street drains formed a cute waterfall into the culvert. 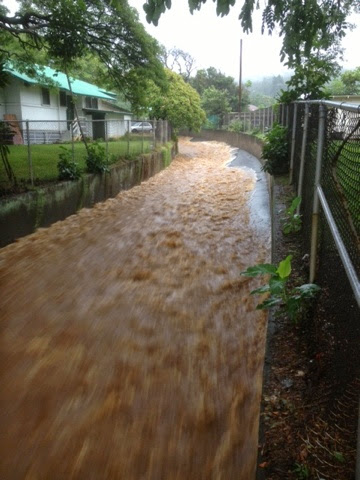 I snapped this photo of the water rushing by, then got into a brief conversation with a county emergency worker. While we were chatting, the sound of the rushing water increased significantly. We turned so find that the water level had risen a good 10"-12" and that the entire bottom of the culvert was now covered. The water had begun to form waves, resulting in the higher noise level. Hummm, time to leave.....just in case the water got worse. One good thing from this though, the culvert got cleaned out. For years it's been accumulating leaves, branches, and bits of trash. 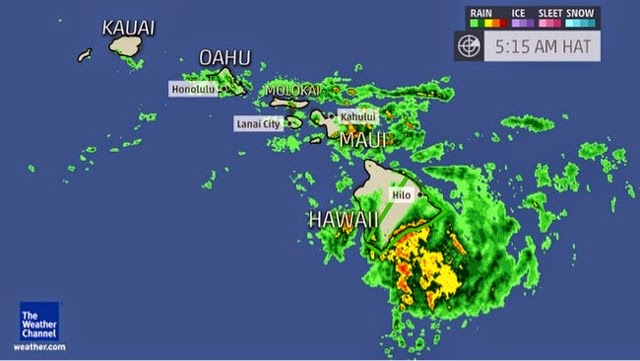 This is the 5:15 am radar showing that the storm had shifted south. Parts continued up the Hamakua coast and to Maui, but the main body turned south, wrapping around the south flanks of Mauna Loa.
So it seems that a hurricane can't cross directly over Mauna Loa. It's got to split and flow around it. Interesting. I wonder if the hurricane were larger if it would act the same? I don't think I'm all that curious to find out.
I checked a weather satellite feed and got these pictures of Iselle being soundly defeated by Mauna Loa. ...... 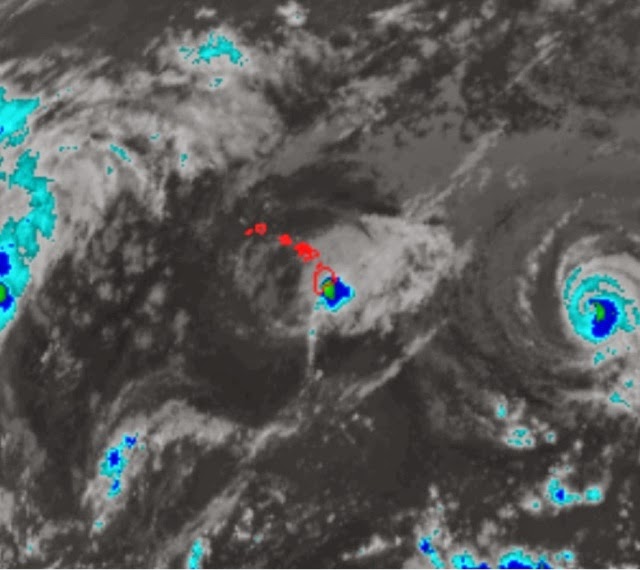 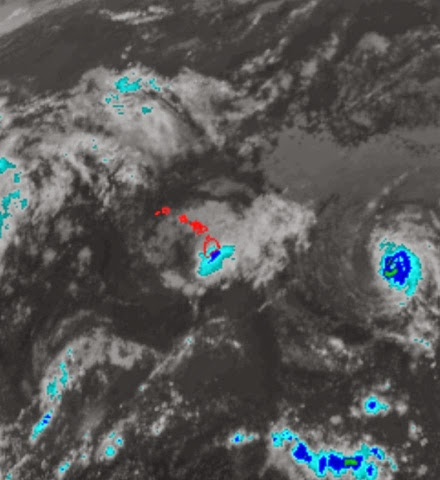 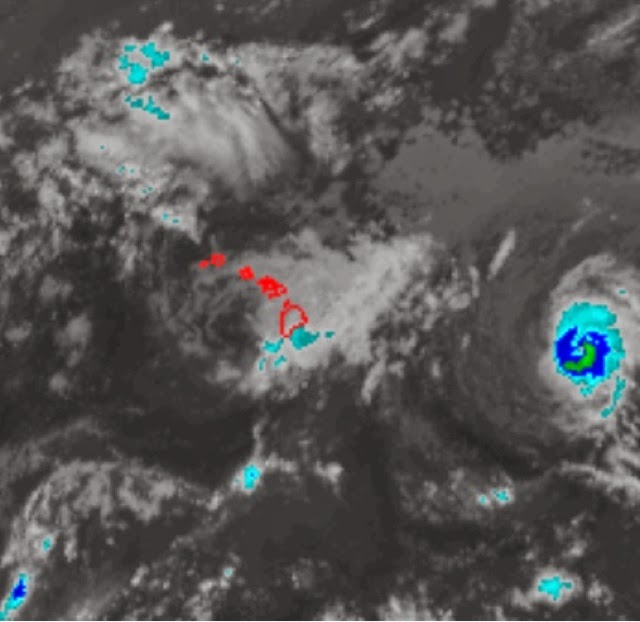 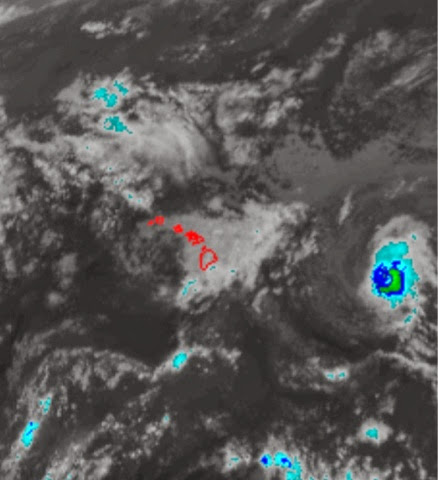 11 am radar showed Iselle reorganizing south of South Point and heading basically west. The white cloudy areas east and north of Big Island contains plenty of rain and wind still. But the worse punch of the storm seems to be pau (done). 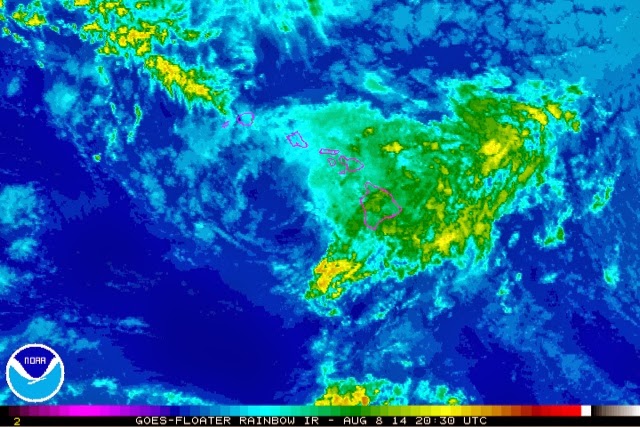 Email ThisBlogThis!Share to TwitterShare to FacebookShare to Pinterest
Labels: Weather