Yesterday was a day to explore Hawaii, specifically Ka'u, where I live. Our local Ka'u Coffee Mill is hosting a coffee festival and as part of the activities, a hike way up on the hills to the old water sources was offered. I immediately signed up. Getting access to those remote areas is almost impossible, unless one is willing to hike in, camp out for weeks in the wet, and work your butt off doing some preservation project for some conservation group. But today a bunch of mostly old foogies got four wheel drived to the end of the old access roads way up in the Ka'u Forest Preserve, then had the opportunity to try to kill themselves hiking a challenging trek over often muddy, slick trails. Right on! 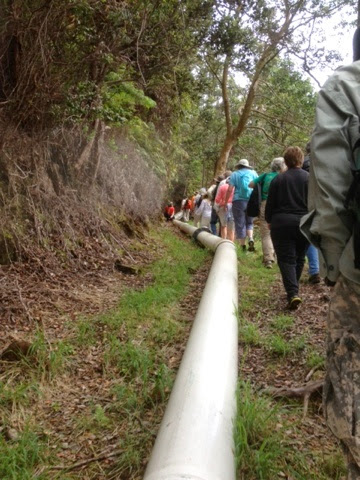 The hike was all about water. Not rain, but about the old sugar cane flume system. Back when sugar was king, water was gold. In Ka'u, water wasn't for irrigating the sugar cane. No. It was for operating the flume system that transported the cut canes down to the mill for processing. Flumes required a lot of flowing water, and Ka'u sugar company had a problem. There were no flowing streams. Water only ran in stream beds when it was raining. 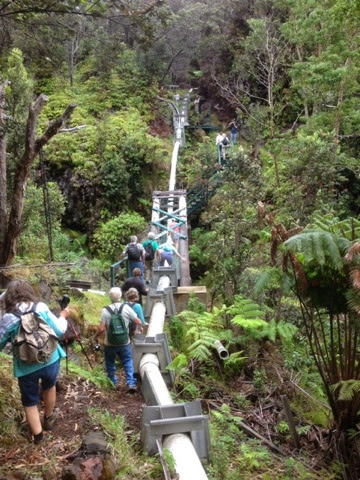 In the late 1800's, the need for large consistent volumes of water led to a water system high in the hills above the cane fields. Spots were identified were water was seeping out of the hillsides, especially along deep gullies. Tunnels were then hand dug into the mountain at a junction where overhead a-a lava met a lower ash layer. These tunnels collected water that filtered down through the overhead lava but couldn't drain through the ash, thus flowing out the tunnels into flumes to be carried down to the cane fields below. Dozens and dozens of tunnels were excavated, though most are blocked or caved in today. 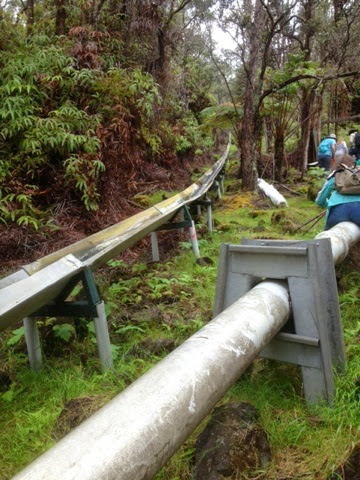 The original flumes were wooden and have long since have rotted away. Replaced with aluminum flumes after WWII, some are still in good enough shape to be restored and actively used today. In the above photo the flume on the left is an old restored flume currently carrying water down from a distant tunnel. The 12" PVC pipe on the right has replaced an old aluminum flume, and it now carries the bulk of the water being harvested today. 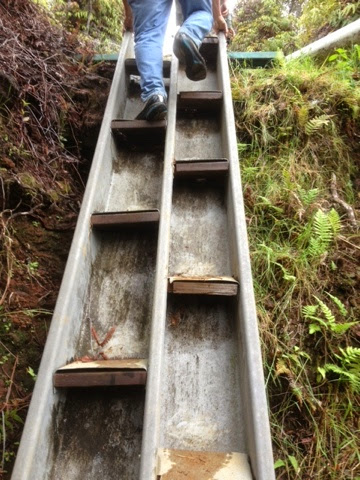 The discarded old aluminum flume pieces have been put to good use. Some are being used to cradle the PVC pipe, some used for foot bridges. In this photo two were riveted together to make a ladder for scaling a rather steep section of trail. 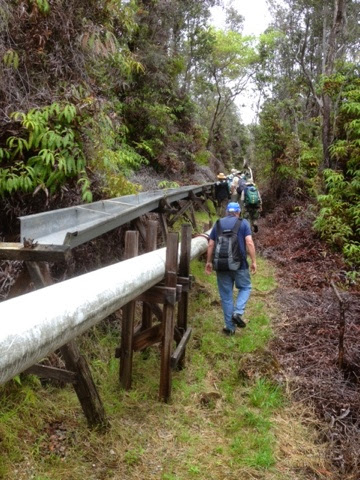 Sections of the disused aluminum flume still run side by side with the new PVC pipe. Surely some future extension of the water system will put these pieces to work once again. But today it's interesting to see the old open flume system as it was used in the sugar cane days. 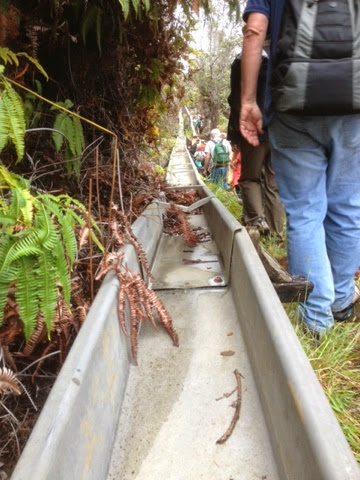 Looking right up the flume gives a good perspective. These old flumes went on for miles and carried quite a lot of water. Every one of these pieces had to be carried in piece by piece. No trucks could be used here. Along the way we saw the remnants of the old wooden flumes, long since rotted by the damp environment. It's amazing how much labor went into making this water system. 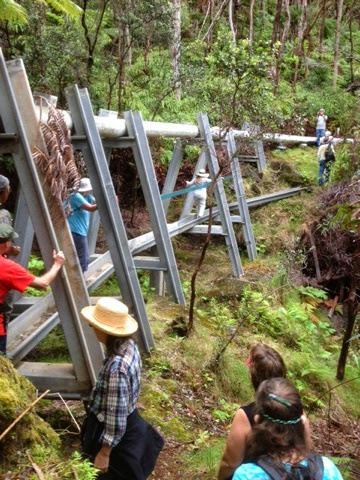 In the above photo, the water pipe transverses a shallow gorge. The original trestle was wooden and looked like a pile of pick-up sticks from the decades of patches and repairs. So aluminum flume sections were used to rebuild the trestle. The sections also came in handy for making a foot bridge below. 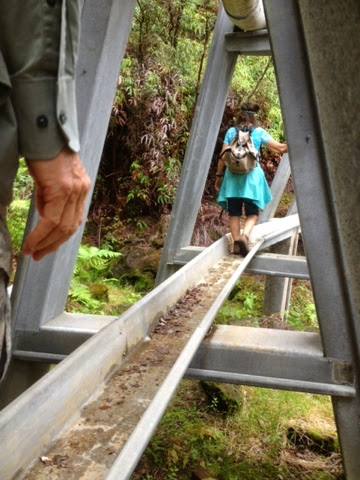 The footbridge is a bit narrow, but quite walkable. 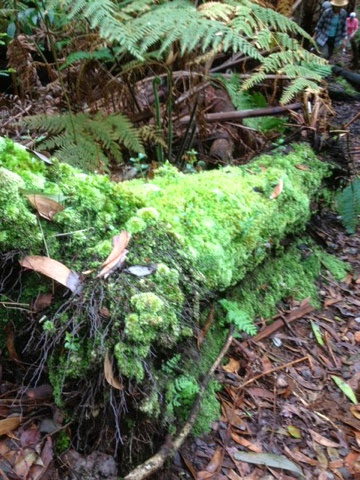 The forest up here is constantly moist. No running streams but everything is wet. 50% of the water comes from rain, but 50% also comes from the fog/clouds that pass through this high forest. The moisture supports the mosses, ferns, and lichens seen everywhere. This fallen tree trunk is covered in green. 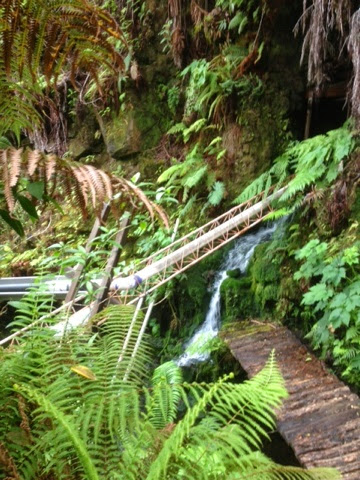 The first tunnel we came upon was Clark tunnel. Tunnels were often named for the foreman of the work crew that built them. Along this particular gorge there are numerous small tunnels. This one has been cleaned out of all the sediment that was blocking it so that it now flows again. It's ready to start capturing water again although for now the water is allowed to naturally flow into the gorge. Within the next few months the pipe will be opened allowing water to travel via the pipe downhill to the coffee mill. 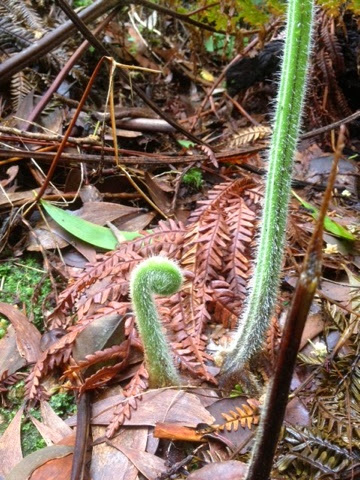 I came upon many, many ferns thriving in the cool, wet forest. I find them fascinating and beautiful. 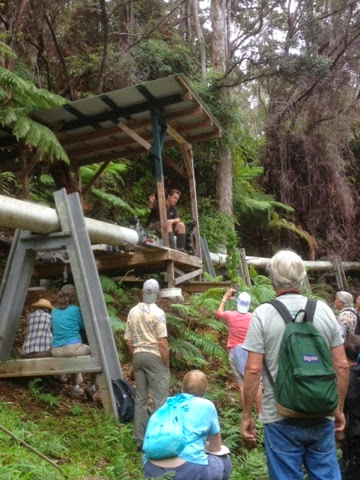 At a resting point, a Nature Conservancy employee talked about the problems that invasive plants cause in a natural watershed, such as the Ka'u Forest Preserve. Hikers also learned about how the forest traps water and transfers it to the stored water below. The forest preseve is a vast nature water storage system. 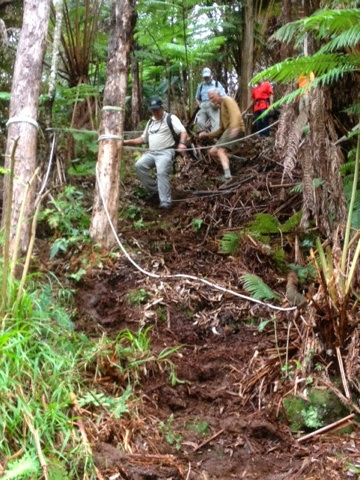 The ground in the preserve is wet and muddy once the vegetative overlay is removed. And boy did we find that out! Luckily there were ropes to help steady the hikers and stop their sliding decent if their feet slipped out from under them. I'm happy to report that we didn't lose anyone over a cliff, but many of us ended up with brown butts. 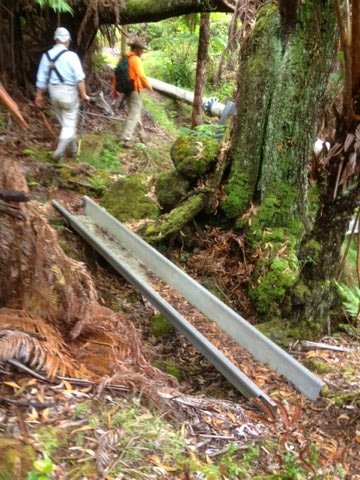 Sections of aluminum flumes were handy for crosses little ditches. Easier on the knees and kept our feet drier. 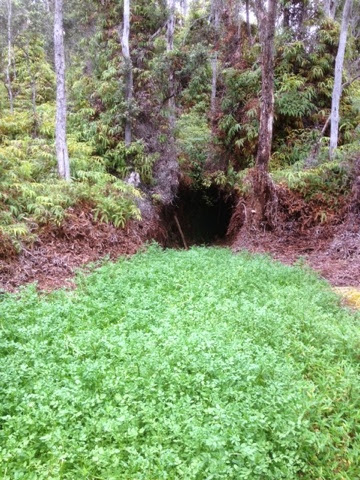 A mile and a half hike in we arrived at Transportation Tunnel. This one is tall and wide enough to easily walk in, plus it's not too long. It cuts through the ridge into the next valley. Although there is. Water transport pipe running through it, there is plenty of water seepage year around. The healthy patch of watercress loves the spot in front of the tunnel. Many of us harvested watercress for our sandwiches. 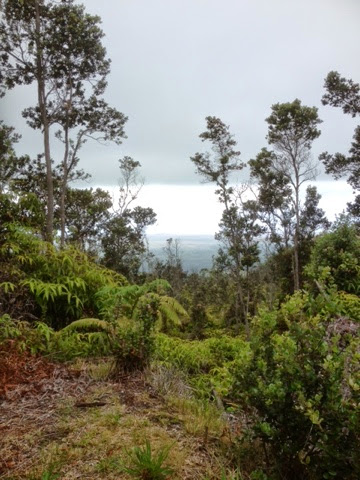 The group settled in for a lunch breah in front of Transportation Tunnel where the view through the trees was marvelous. We're fairly high up here so we can look down at our starting spot, the macadamia nut orchards and coffee farms below, the vast lava fields & coastline, the ocean beyond. Al around us we could see and hear plenty of native birds, some quite rare and endangered. It was the first time I've heard many of these birds. 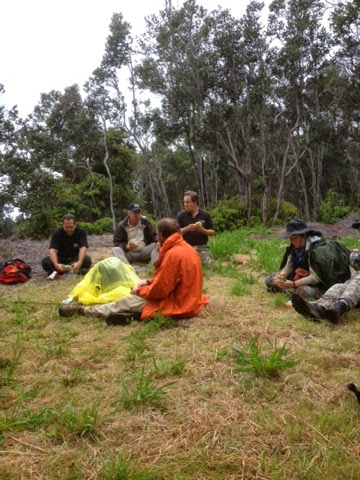 Needless to say, no picnic tables up here, we collapsed on the grass and munched our lunches in the rain. Not a downpour but we all got soaked. But then, that's what this watershed is all about. 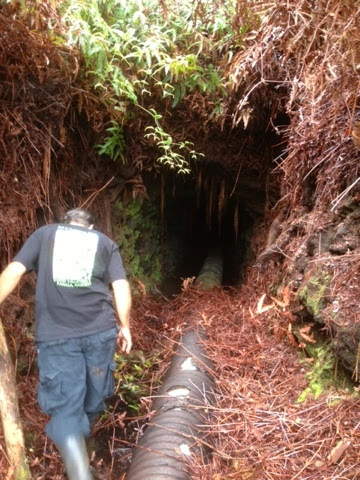 Before heading back down the trail........the melody of Slip Sliding Away kept creeping into my thoughts..... a few of us took the time to take a closer look at the entrance to Transportation Tunnel. Without boots, we didn't venture too close. But it was pretty neat none the less. 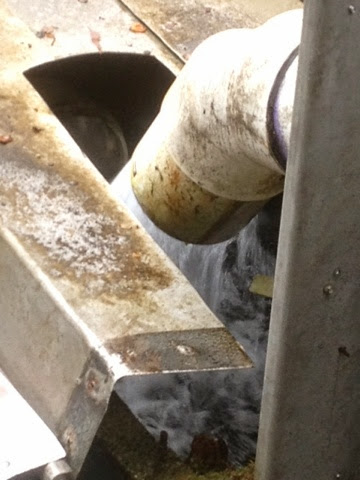 As we slid our way down the mountain, I had a chance to get close to the pipe at a combination box. I was impressed with the amount of water running through the pipe. And right now they are not harvesting much. Soon they plan to triple or quadruple the amount because then plan calls for a small hydroelectric plant to generate the power needed to run the coffee mill. The discharge water will be used for irrigating the coffee fields.
Posted by Su Ba at 11:16 PM