Continueing coffee festival activities ......  Star gazing night atop Makanau (aka: Flat Top Mountain, aptly nicknamed). Once again this year, John Cross plus his co-hosts invited a group to travel to the top of Makanau, part of the Ninole hill system. This land is not normally accessable to the public since it is part of an active cattle ranch. Thus the star gazing trips fill up quickly every year. People are curious about what's up on that hill and what the view is like. 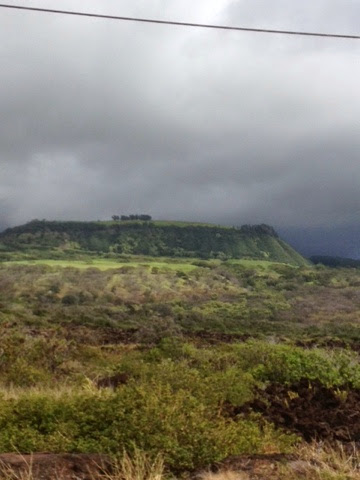 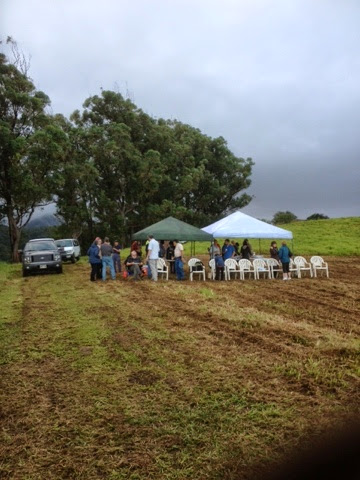 Luxury atop the mountain! Chairs, tables, tents, lights, food, coffee, wine! The group arrives and explores the area with the guides, learning about the history of the area. The Ninole hill system is ancient lava, much older than the Mauna Loa lava which has covered over most of it. So the Ninole hills are very eroded and look oddly out of place in the landscape. There's a whole series of hills here, all with Hawaiian names of course, but some with colorful haole nicknames - Flat Top, Caterpillar Hill. 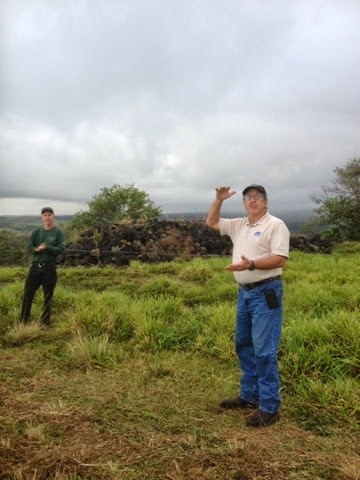 The original Hawaiians used these hills to live, hunt, grow food, gather resources. John told the story behind the old heiau, Hawaiian religous site or "temple", that you can see in the background of the photo above. Those black lava rocks were part of a large platform and wall system, which sadly, was partially bulldozed away during the sugar cane days. But there still are thousands of ili'ili stones (rounded lava pebbles found along the coast and beaches) that had been hand toted up the hill to form the flooring fill of the heiau. The stone layer is often two feet deep! That's a heck of a lot of stones and labor. 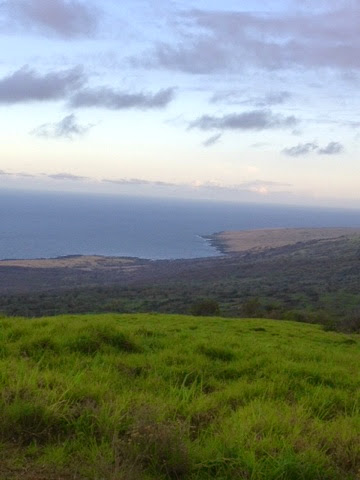 The view atop the hill is spectacular. One can see the long coastline stretching from deep within the Volcanoes National Park to the east (left) and heading toward South Point to the south (right). The coast is so vast that the photo above only takes in a very small portion. The coast is totally unihabited except for one small community consisting of some condos, a golf course, and a county beach park. Very few people. To the far left, up on the Kilauea mountain we could see the bright red glow from the lava in the crater there. The crater is too distant for it to show up on my iPhone, so you'll just have to imagine the sky glowing red there. 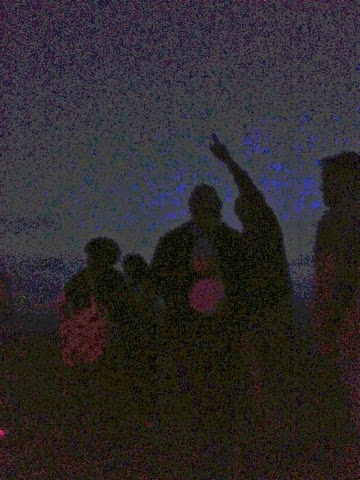 Eventually the sun set and stars began appearing. Way too much moonlight for good viewing, but guest astronomer from the Gemini telescope gave the crowd some great info about the workings of the universe and identified many stars. Surprisingly to me, many in the crowd were able to identify Hokulea, a star important to Hawaiian history. And just about everybody was able to see the Southern Cross.
Our friend, Peter Anderson, remembered to bring his camera this year ....yes, he left it in his car on the last trip.... and took some nice long exposure shots. In one of his photos, shown below, everyone pointed their laser lights at Jupiter while Peter took the shot. Turned out pretty amazing. 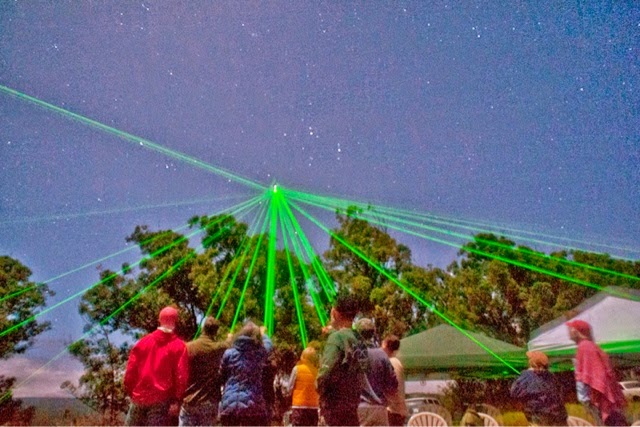 By 9:30 pm the winds had chilled most people, the food ran out, and the trip was brought to an end. One pretty good evening together!
Posted by Su Ba at 4:27 PM