The Making of Our Great Rock Wall

When we first bought our property there was a bit of a low, dry rock wall along the street. It had fallen apart in places. I tried plopping rocks back into place, but it really needed a makeover.  Plus it only ran part of the way along the front of the property. I knew that someday I would try to improve it. I wanted to be able to do it myself, but I was wise enough on this project to seek help.

In the process of clearing and cutting brush, we came upon rocks jutting out of the ground. They were added to the rock wall. Then the garden project began. Hundreds of rocks were removed to make the first garden area. Then hundreds more rocks were dug out for the second, main garden spot. All those rocks were also moved to the wall out front. When work was done on the driveway, we had more rocks to move. Then a major coup......a farmer up the road decided to run a water line to his farm. He had load after load of rock that he needed to get rid of. Bonanza! I was just as glad to get the rocks as he was to get rid of them. A perfect match!

Now I had a plethora of rocks. Next step was deciding exactly where the wall would run, how it should look, and should it be cemented or dry. I opted for cement.

A friend was an experienced rock wall builder. So with the help from another person, we tackled the wall. I have zero experience making rock walls, but while I worked, I watched. Hopefully I learned. I became the "mule". I got the supplies : water, rocks, sand, cement. I learned about string lines, levels, braces, setting up the foundation, choosing bottom rocks versus top rocks, setting rocks into place. Plus bracing rocks, using little rocks in crevices, setting internal rocks, and finishing the top of the wall. I learned how to mix cement, what the right consistency is for this job, how to fill the cement in so that it doesn't show on the outside. I learned how high you can build in a day, how much concrete can be safely poured each day, how long it needs to cure before you can add more height. I learned how to angle the rear wall in order to give stability if the wall is to be higher than 2 feet. Lots to learn. 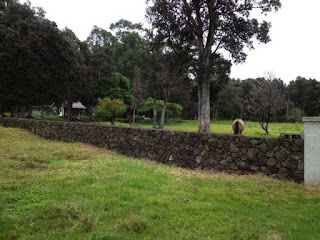 The rock wall now extends across the entire front of the property. It is high enough to keep the horse and sheep in, but not the goat. The goat jumps atop even the five foot high sections quite easily and likes to sleep atop the wall. Bad goat!...but I love him. He makes me laugh. He reminds me to grab life by the tail and hang on tight for a wild ride, laughing and kicking up my heels at the same time.
Posted by Su Ba at 4:24 PM

Email ThisBlogThis!Share to TwitterShare to FacebookShare to Pinterest
Labels: Rocks