Dog attack!!!!!   Not mine, but a neighbor's. A horrible disaster that could have been avoided if the dog owner had been a responsible person. But here in paradise, there are a lot of irresponsible dog owners. This neighbor lost four adult sheep outright. A fifth had to be shot the next day due to the attack. And her prematurely born lamb most likely won't survive either.

Dealing with a dog attack is something that most livestock owners have to deal with at least once in their life. Sadly, many of us have these attacks happen over and over again. Not only does the farmer have dead and injured livestock, he often never gets reimbursed for his loses plus has a dog owner pissed at him!  For real! The dog owner is mad. By some twisted, denial type of logic, the dog owner blames the farmer. And heaven forbid if the farmer shoots the dog in order to stop the killing. The dog owner is then super pissed.  I've seen it happen many times.

I've talked with plenty of dog owners who routinely let their dogs run. Some take their dogs to rural areas and purposely let them loose in order to give them a good run. Never do they consider the chance that their friendly dogs will kill livestock if given the opportunity. They swear that "not my dog, he never would". But in reality, it's just a dog doing a dog thing, killing prey. Other owners let their dogs roam at night, claiming that dogs need to roam, it's their instinct. Well, it's also their instinct to kill, but owners refuse to acknowledge that. On my own road one of my own neighbors swore that his dogs never left his property. After giving him several warnings, his dogs were shot dead after killing several sheep. Instantly he was angry, threatening several farming neighbors, not acknowledging that he and his dogs were at fault. We all breathed a sigh of relief when he moved away.

Most dogs will kill livestock if put in the right situation, that is, unsupervised freedom. Those that
are too small to make a kill can still maim or otherwise injure livestock. I've seen sheep die after being harassed for an hour, constantly being run, and never have been torn or bitten even once. I've seen chickens and rabbits kill themselves inside their pens slamming against the walls while a dog harasses them from the outside.

Several years ago I too experienced a dog attack. I had some dead sheep and some injured ones that recovered but bore the scars and fear for the rest of their lives. Thankfully my next door neighbor shot the dog before I lost my entire flock. The dog owner refused to pay, then moved away to places unknown. The incident prompted me to get guard dogs and install electrified fencing, expenses that I should not have had to bear, in my opinion. The dog was the trespasser, not the sheep.

Graphic photo below......... What a dog can do to sheep......if you are aghast and can't bring yourself to look, that's fine by me. But then perhaps farming isn't for you, because as a farmer it is something you'll someday see on your own farm.  It doesn't matter what kind of livestock you have, the are all vulnerable. Even cattle and horses aren't safe. One of my friend's dogs even managed to kill a domestic pig. My girlfriend had two horses were killed here on my farm by loose dogs.  Dogs are effective killers. No way am I against dogs, but loose uncontrolled ones can be destructive to innocent livestock. 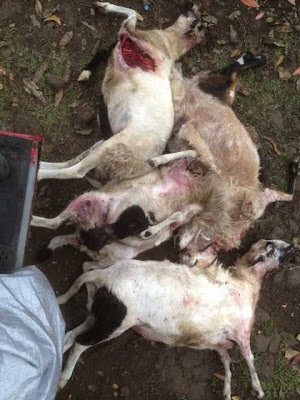