In Hawaii, tradewinds are a given, very much a sure thing. Frankly, I love the wind. But my garden has the opposite viewpoint. It doesn't agree with me on this one. Plants do poorly in the heavy wind, sometimes twisting and spinning about, completely tearing apart. I just recently lost a whole crop of young gourd plants to heavy winds. Some plants manage to produce in spite of the wind, but others need some protection.

Not only the plants need protection.  If I am using cardboard or newspaper mulch, the winds will blow them away unless I do something to hold them in place. Usually a partial shovel of dirt or a few rocks will do the job. Trellises also fall victim to the wind. I've had rather nice trellises blow over in heavy tradewinds.  Now I make it a habit to stake down all trellises well. I've also had my share of plant tags and row markers blow away. That used to really make me mad to come out and find all the name tags gone. Now I go to extremes to make them secure.

Here's a few things I do because of our tradewinds.
...small temporary plant tags are bright yellow so that I can find them nestled down in the mulch. Their location is indicated by a yellow painted stick/sapling stem. Tags that are intended to stay longer than a week or two are staple gunned to a well pounded in stake.
...when tying vines to trellises, I use a stretchy piece of fabric and make the tie in a figure 8. I found that this helps prevent damage to the vine. And I use plenty of ties, not just one here and there. This helps prevent vines from getting kinks and rips.
...I stake down winter squash and pumpkin vines very 6 feet or so. This keeps them from twisting and being whipped about.
...I tie certain young plants to a temporary stake, including tomatoes, peppers, gourds, pumpkins, and squashes, until they have grown enough to either be attached to a trellis, be staked down in some other way, or are stout enough to take the wind.
...I align the rows so that the trades blow down the length of the row rather than across it.
...stout, strong plants are grown to the windward side, allowing weaker type plants to get some protection from the wind
...I purposely plant permanent windbreaks on the perimeters, using panex and sugar cane.
...I use large growing plants as wind modifiers for smaller ones. Things like yacon grow large. Japanese eggplant grows rather bushy and tall. So does Hawaiian chili peppers. These help shelter smaller plants.
...I build permanent windbreaks in some areas -- stone walls and solid fencing.
...when using containers, I won't fill them to the very top. I'll leave the soil about 6 inches below  the lip of the container. This gives the seedlings a bit of protection.
...I'll use temporary windbreaks for some plants. A three sided shelter made out of scrap wood works well and doesn't blow down. I've also used a large plastic bottle with the top and bottom cut off . Partially buried into the soil so that it doesn't blow away, it works as a collar to shelter the young plant. 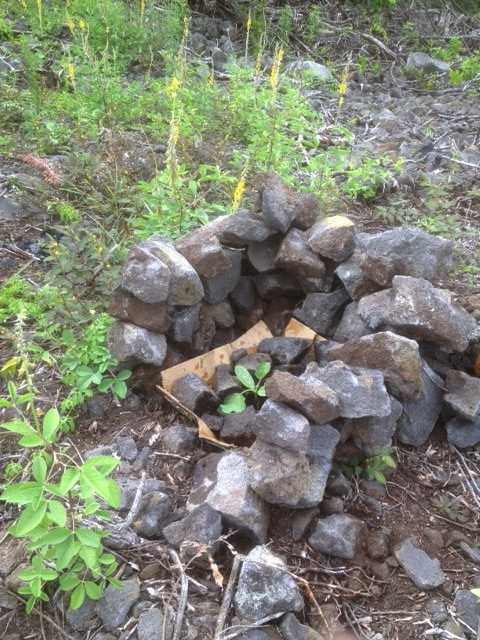 ...The photos show c shelters that I made from rocks laying about. They are called c shelters because they are in the shape of the letter c. By piling rocks about 1 1/2 feet high on the windward side, the plant gets protected while it is young. One could just as well make them out of plywood, but rocks are readily available here. In fact, rock are everywhere! Since I have to move them anyway, I can just move some of them a short distance to make wind shelters.
Posted by Su Ba at 2:49 PM

Email ThisBlogThis!Share to TwitterShare to FacebookShare to Pinterest
Labels: Weather