The Driveway to the House 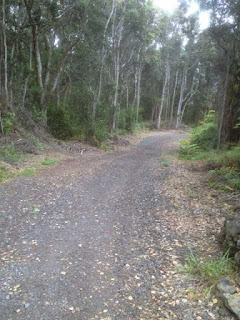 When we bought this land, a rough driveway had already been cut going to the house site. It was pretty rough, but as long as we had a truck or high car, it was driveable. But our low slung Volkswagen bug couldn't safely make it. Upgrading the driveway was low on our priority list when we first arrived, but all along we knew we would have to do improvements, serious improvements.

The time arrived when I wanted a roadway to the back of the property plus a strip of land cleared so that I could put up pasture fencing. We had enough work now to justify hiring an excavator. since part of the work would be fixing the driveway. So when one of the near neighbors hired an excavator for work on their land, here was the perfect opportunity. We could save a bit of money by sharing the equipment transportation cost. I also whimsically decided to have the excavator cut in a circular driveway section up by the house, while the equipment was here. It turned out to be a great idea. 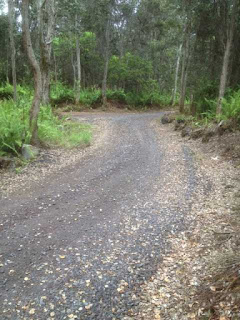 Initially the driveway was mostly just a scraped path up to the house. During heavy rains, it was a mire down in the field area. A torrential rain washed the dirt out up on the hill, leaving very rough lava rocks and exposing a whopper boulder. Even the truck was having trouble with the driveway.

Being such inexperienced newbies when we first arrived, we purchased several truckloads of cinder to line the driveway. It was the totally wrong thing to put down, and the person who sold us the cinder never said a word. To this day I have no respect for that person, taking advantage of newcomers. So before long the cinder disappeared. Some washed away in the heavy rain, some blown away with the tradewinds, and some crushed to powder by the vehicle tires.

As  "bandaid-patch" repairs, I began saving any little rocks that I found while working in the garden. I made a soil sifter to help removed larger rock, and simply changed the straining mesh to 1"x1". Any rock sifted out that was the size of a hen's egg or smaller was dumped on the driveway down in the field. This made the driveway passable when it rained heavy. Not a cure, but it helped.

Finally the excavator arrived! A happy day! In the matter of only three days, we had a road cut to the back, fence line cleared for a 5 acre pasture, numerous unwanted trees removed, an old concrete wall busted up into workable pieces, fence post holes hammered, and  the driveway repaired. The "valley" that went through a dead riverbed was built up a few feet making the crossing less of a severe dip. The giant boulder in the middle of the driveway was removed. The new circular driveway was cut in. And in general the whole driveway was smoothed out then covered in several inches of base coarse.

Over the years the lava rock base coarse has been gradually crushed to sand where the tire tracks are. Once a year I pick up about a ton of crushed lava to spread in the tire tracks. But before I do, I broom up some of the sand to use in the garden. Since the driveway is about 1200 feet long, that equates to quite a lot of sand. I don't go crazy gathering sand.....just scoop up any major piles. The sand seems to do well for the garden soil.
Posted by Su Ba at 5:55 PM