Yesterday was a cold one, but more worrisome was that it was windy. By far it wasn't a fierce windstorm like we've had in the past, but it still had a kick to it.

Today I surveyed the farm. Several small trees had been knocked over, including my main mamaki tree. But I have others, so it's no big deal. Lost a medium lime tree. Again, not a big deal. Two other medium sized trees came down, both eucalyptus. No great loss there either. Half the chaya hedge broke off at their bases, so it looks like I'll be making lots of cuttings and planting them tomorrow. No sense in wasting the cuttings. I can always use more chaya for feeding the livestock. Lots and lots of twigs strewn all over. And a few small branches hit the ground. All in all, not much tree damage.

The bananas took the brunt of it. 17 trees toppled, and several bent in half. 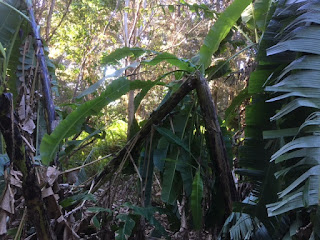 I spent much of the day cleaning up. I didn't get the bananas nor the chaya taken care of. That will be for tomorrow.
Posted by Su Ba at 10:09 PM

Email ThisBlogThis!Share to TwitterShare to FacebookShare to Pinterest
Labels: Diary