Come to Kapapala Ranch and you'd never suspect you were in Hawaii. A large mountain backdrop, hills, cattle pastures, trees -- not a palm tree in sight. Working ranch horses, ranch atv's, cow working dogs, and 520 cows waiting in a corral to be pregnancy tested. And that's only one herd, there are several more, but it's the only one being worked with today.
If you're especially lucky, you'll get invited out to the ranch in a working day. Today I was lucky! Not that I participated in actually working the cattle, but I sat right in the middle of a few hundred pregnant cows  and watched the goings on....though I'm not sure who was watching who. The cows seemed pretty curious. 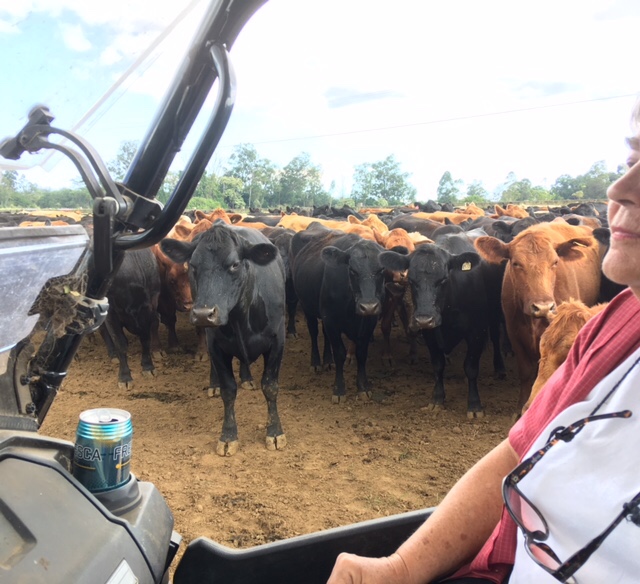 Above, yup we are right in the midst of things!
Starting at 7 a.m., the crew calmly and respectfully worked ....yes.....520 cows through the pens and chute. Each was hopefully 3 to 5 months pregnant. And actually, over 90% of the herd proved to be positive. One by one they were directed into a squeeze chute. Surprisingly most voluntarily entered with mild or no coaxing...just an open gate, a few whistles or the touch of a hand, or the shake of a paddle against the fence. Yes, some required stronger prodding, but as with other Kapapala Ranch operations, no cattle were harshly treated. It was amazing to see these 1400-1500 pound animals generally cooperating. Not that pregnancy testing is enjoyable, but they objected more to the oral deworming medication than anything else. 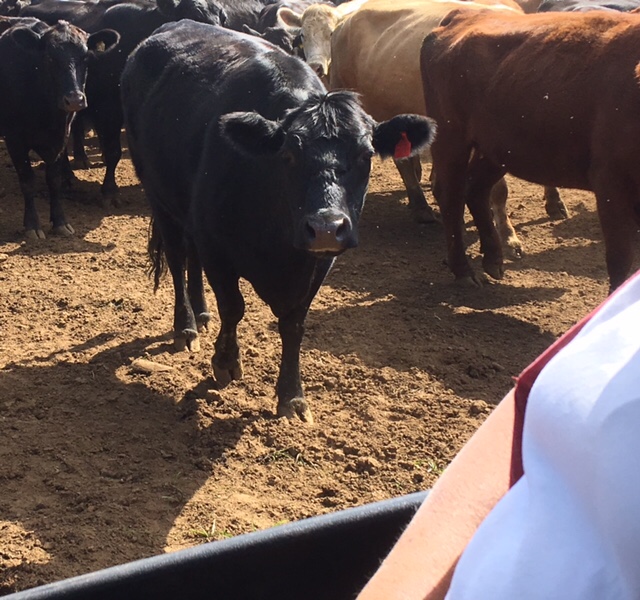 Each cow was visually checked, pregnancy checked, dewormed, vaccinated, plus any other needed servicing before being released into the corral with their other herdmates. The older more experienced cow had been through this before and it showed. They mostly simply walked out the chute, found a place to lounge and chew their cud. 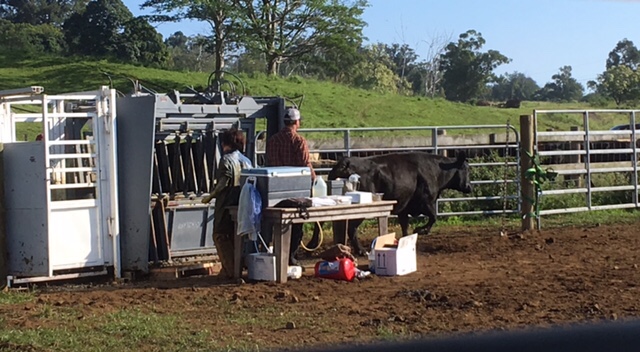 Above, a cow walks out of the chute. 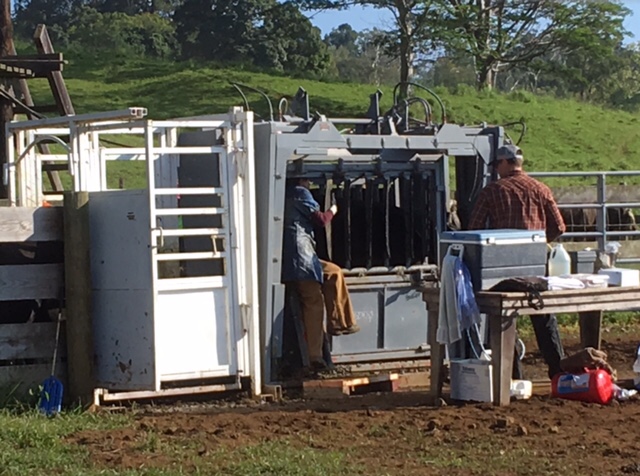 The cows enter from the left. The white gate is a calf catcher. There were a few wayward calves in the group that evaded round up in October. So today they were captured in the white pen as they walked through. The idea was to protect them from being injured by a cow in the squeeze chute. Once the cow was released, the calf is directed into the open area with the cows heading to Ponoholo Ranch on the north side of the island.
The grey structure is the squeeze chute, a hydraulically operated cow restraint. The cow enters and the exit gate partially closes, capturing the cow around the neck, preventing her from backing up. The sides of the chute now move inward to snuggly hold the cow still. With the cow safely held, the brave veterinarian can now reach inside and preg check the cow.....a not all that pleasant task of reaching up inside the cows rectum to feel for a developing calf. Yup, it's a shitty job! Thankfully it's over in one second flat.
A few cows wandered past us and nibbled on grass around the edges of the corral. They surely didn't seem all that upset by what just happened to them, 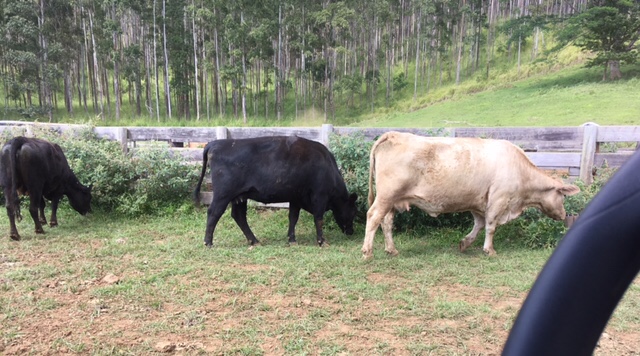 The inexperienced young cows were surprised by the goings on. They charged out of the chute, huffed, kicked a tad, and were thoroughly miffed, panting for a couple of minutes before calming down and finally following the example of the older cows. And it was these young punks that were the troublesome ones getting into the chute. 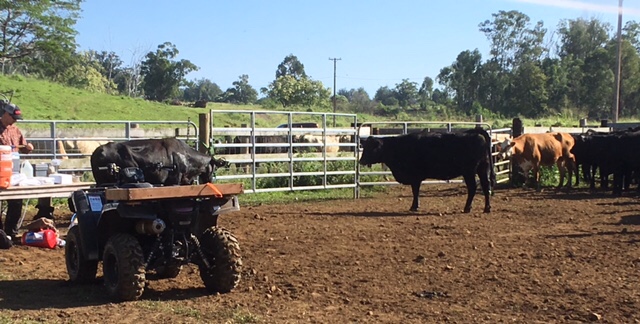 One older cow was quite enthralled by it all. She calmly walked out then promptly turned 180° in order the watch. For the next 2 hours she studied each cow leaving the chute and often got so close to the workers that she needed to be shoo'd back some. One curious cow!
Did I mention that I was in the middle of these cows? Right! Sitting in one of the ranch vehicles with a friend, we had front row seats. In fact, the front row often came right to us! Whoa....is that an earthquake I feel? Oh, it's just a cow scratching it's chin on the back of the vehicle. 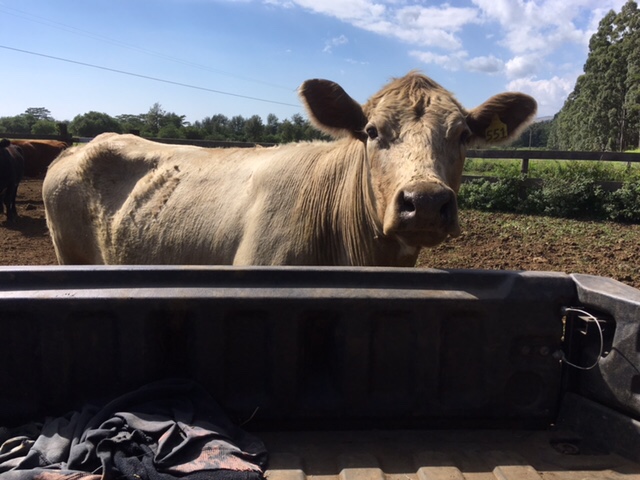 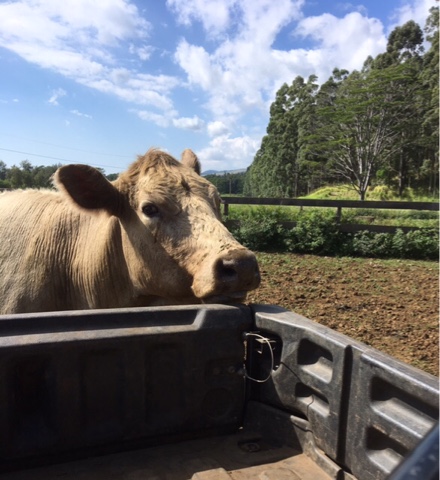 So how long does it take to deal with 520 cows? 5 hours. Subtracting break times for snacks, that's 2 cows a minute. It takes one second to preg check, 15 seconds on average to do the rest. Moving the cattle takes up the rest of the time. Quite a slick, fluid operation, I'd say.
Over 90% of the cows came up pregnant. A few of those cows were elderly (12 years of age) and carrying their final calf. To make life easier for them they were to be moved to a softer pasture on the north side of the island. Having brands on their hips that coresponded to their birth year made finding the older cows easy. Below, this cow has the number 4, which equals 2004. 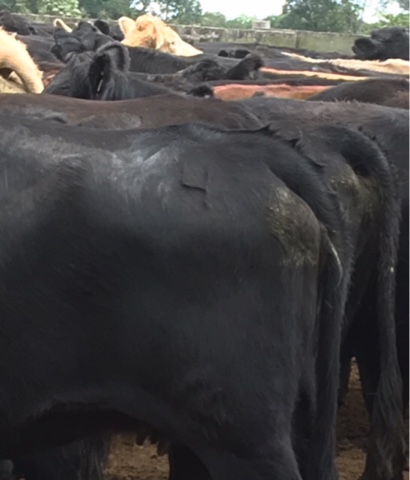 The cows that came up open, that is, not pregnant, go back to the owner's ranch to be rebred, sold, slaughtered, or whatever is their destiny. Owner not Kapapala Ranch? No. Two ranchers cooperate with these 520 cows. They have a deal where they share the calves that are born.
The calves from this herd are destined to become beef for Whole Foods. Kapapala Ranch goes the extra mile to be GlobalGAP certified so that their calves can be available for the special market. GAP stands for Good Agricultural Practices. 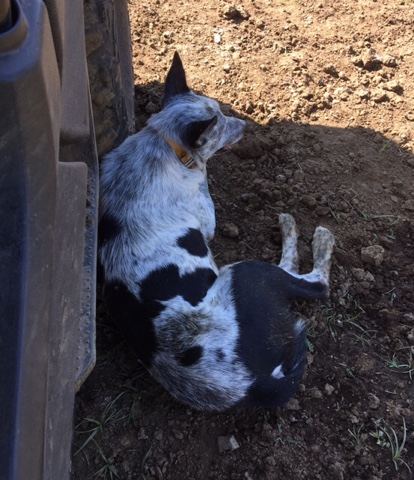 With the work done, one of the dogs takes a break in the shade. The dogs are imperative for an operation like today. They keep both people and cows from getting injured.
Posted by Su Ba at 6:54 PM