Every Wednesday Adam is taking his garden surplus to the local farmers market. If you recall, Adam is our farm's Wwoofer. These past few weeks have been discouraging for him, as he's learning the difficulties of dealing with uncooperative weather. But I have high hopes that he'll slug it through and eventually be able to support his simple life. 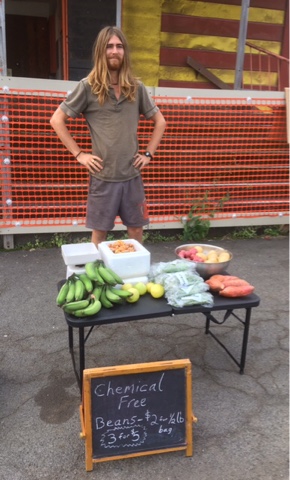 This past week he sold all except one pound of beans, which one of my neighbors purchased after the market. So he did ok. Each week he plans to bring more than the week before, gradually figuring out what his customers want to buy. Rather than having surplus that might go to waste, he's decided to start out slow and gradually build up.
Sure, this is a very modest start. But Adam doesn't want to live a life revolving around money. Thus his needs are low. Looks to me that he'll do just fine and be self supporting in a few months. This past week he's been spending part of his free time expanding his garden and building compost bins. Yes, he is planning on selling compost too. Looks to me that he's going to need a bigger market table!
Posted by Su Ba at 9:25 PM

Email ThisBlogThis!Share to TwitterShare to FacebookShare to Pinterest
Labels: Wwoofers