With the addition of a puppy to the family, we've had to make a modification to our pet door. Normally, the dogs and cats have free access to come and go as they please. Only occasionally do we need to block the door for one reason is another, and it's just a temporary thing. But having an inexperienced puppy around has changed that for the time being. Reason......
Cane toads. 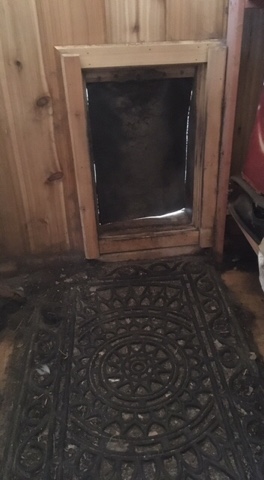 Above, the normal homemade pet door with a flap to deter flies and mosquitos. 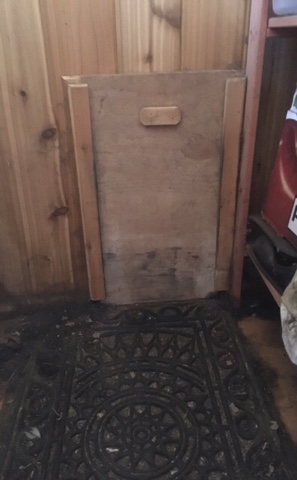 Above, the slide-in door that shuts access off.
Cane toads can be highly toxic when disturbed, emitting a toxin that can easily kill a dog who mouths, picks up, or bites the toad. Sadly, I watched my neighbor's dog die after biting a toad, and there was little we could do to save it. From bite to death took about 20 minutes. It was horrible to witness. So it's imperative to keep the puppy out of harm's way until he is well trained to avoid toads. So until then, we needed to come up with a solution to allow the cats to come and go at night while blocking the pup. 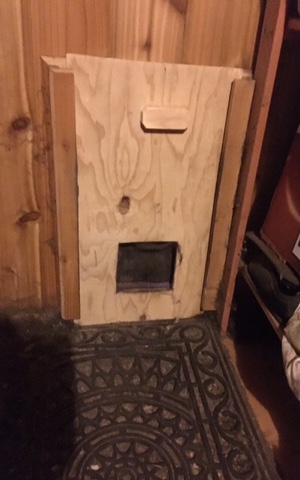 We made a second door with a cat sized hole. Some of the fatter cats have to make an effort to squeeze through, but we'll fix that shortly. As the pup grows we can enlarge the hole for our fatty cats. When this restrictive door is in place, we pin up the rubber flap, otherwise the cats wouldn't be able to use the door.
Noodles is only 3 1/2 months old, so he's still too young to understand about those toads. But eventually he'll learn and we can go back to normal egress once again.
Posted by Su Ba at 10:08 AM