Last weekend I had the opportunity to attend a local calf branding event. This was a "first" for me. Oh, I've worked around cattle before, mostly dairy cows. But I've never seen branding and working the calves.
I arrived at the ranch at 9 a.m.  The herd had already been brought in from the pastures and the calves separated out. Pictured below, a modern day Hawaiian cowgirl rests, waiting for the next step. Behind her is the pen with the anxious moms. Yes, cowboys still exist here, for real! 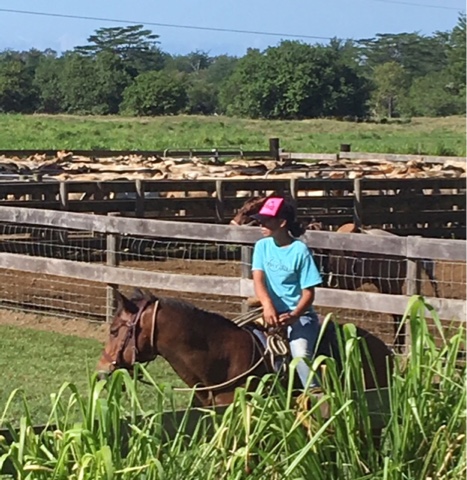 The farm dogs have done their job and are taken away from the area. Those canines love to work, so keeping them in work area would only frustrate them. So they go home to rest. 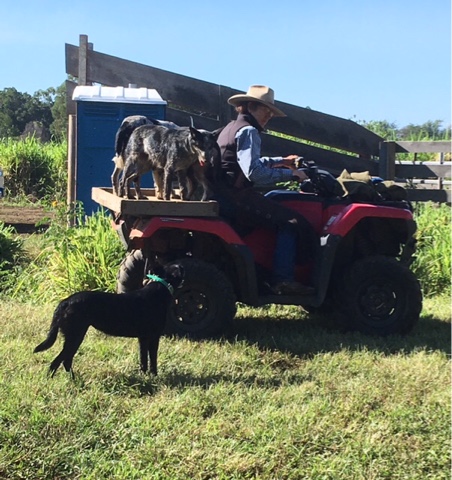 The calves are in a pen, of course separated from their moms. I was surprised to see how quickly they calmed down. Very little bawling was heard, just the occasional call to mom. On average, a little less than 10% of the calves would call out occasionally, hoping to find mom. Surprisingly, most were really calm. Not what I expected, but I was pleased to see how gently the calves were being handled. 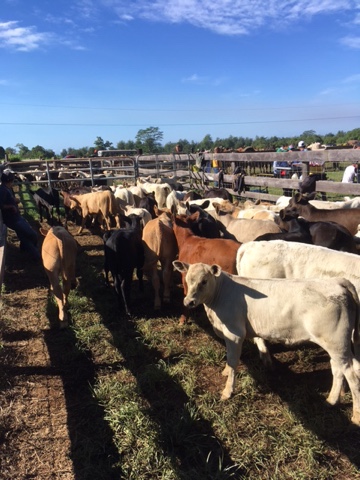 The work corral is specifically set up for this action. Small groups of calves can easily and calmly be moved from the main pen to a smaller catch pen. Everything gets set up in advance before the first calf is roped. 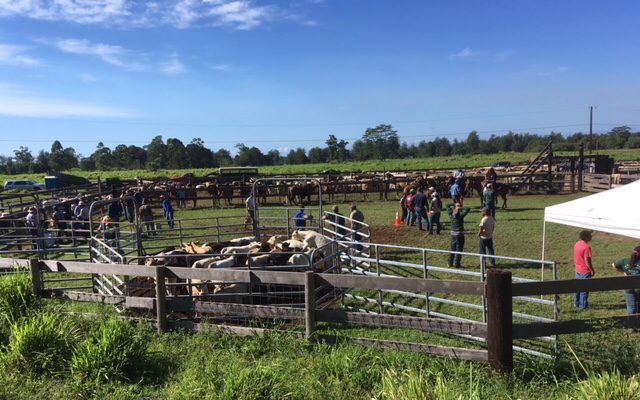 By roping a calf, I mean gently noosing the hind legs. No dashing about on a horse, no throwing a noose over the head, no yanking a calf by the neck, no excitement, no hot-dogging. Everything is very low key. In fact, none of the calves seem very nervous until it's down to the last two. The last two finally notice that everybody else has disappeared and they are reluctant to step into the noose. Usually at this point the calves are caught by placing a noose over their head and shoulders and allowing them to walk through the noose, then closing the noose about the hind legs. Again, very low key and no excitement. 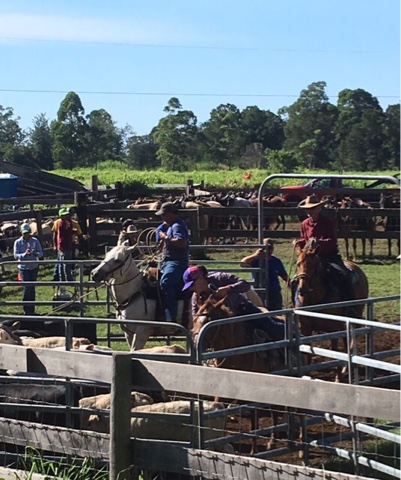 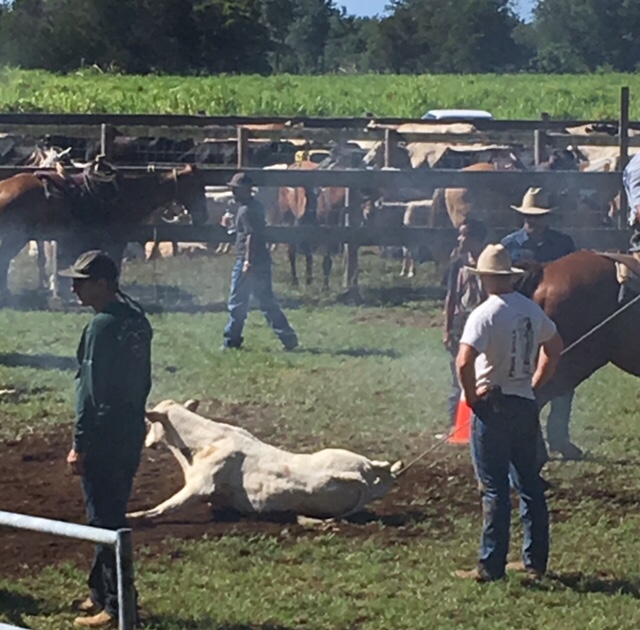 Once at a work station, the calves were positioned onto their right sides. The horse kept tension on the rope, holding the hind legs still. A cowboy sat on the calf to hold it steady and calm it. Some calves attempted to stand and threw the cowboy off, but others opted to lay still. So far, so good. 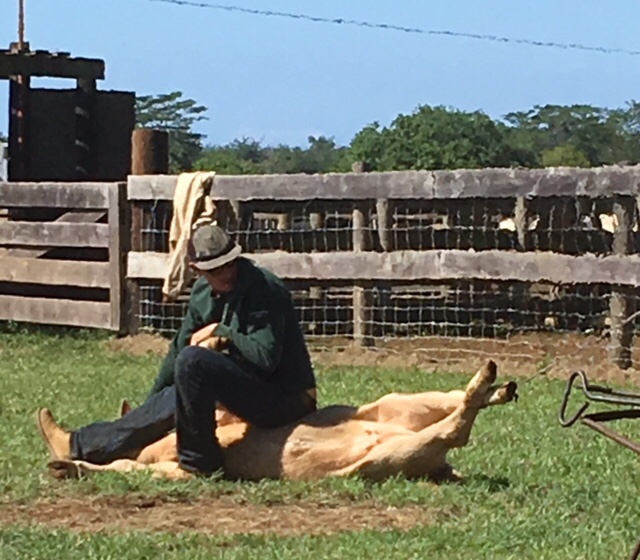 Now came the part that the calves voiced an objection. Frankly, I would too! A hot branding iron was held to the spot on the leg for two seconds. The calf was vaccinated and an ear tag attached. And if the calf was male, it was quickly castrated. Everything was done quickly and efficiently. The calf was released in the matter of a couple of minutes. 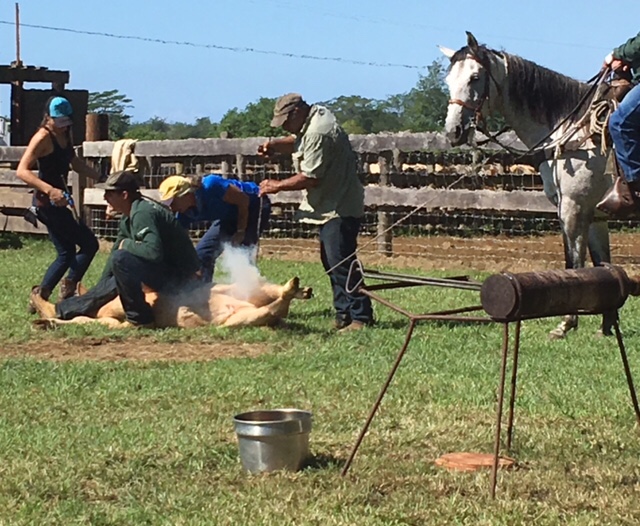 Once released, most of the calves made their way over to the corner of the pen near the exit gate, which was close the the waiting moms. A few simply walked around, visiting the work stations and watching the next calf being worked on. Wow, they didn't seem spooked at all. In fact, cowboys had to shoo these curious calves away from the work area so that they wouldn't be under foot. 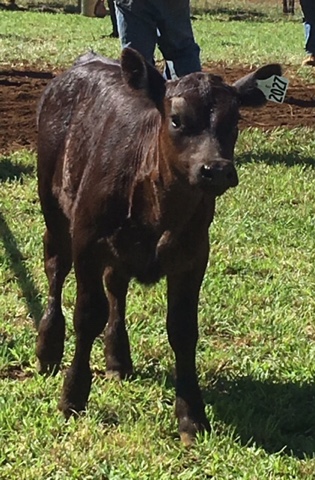 The calf below, sporting it's fresh brand, wanted to return to the catch pen. Eventually someone came by to urge it to join the other calves already done. 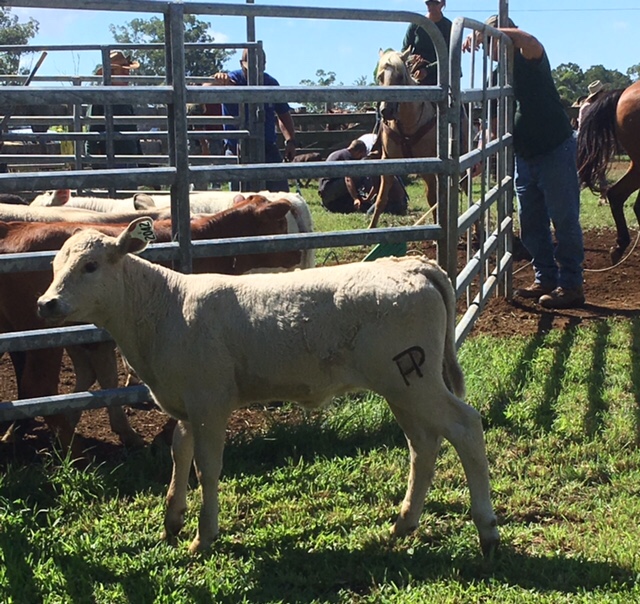 The whole affair was done according to a prearranged pace. 30-40 calves were done, then everyone took a brief break while the finished calves were returned to their waiting moms. Below, a couple of cowboys taking a watermelon break. 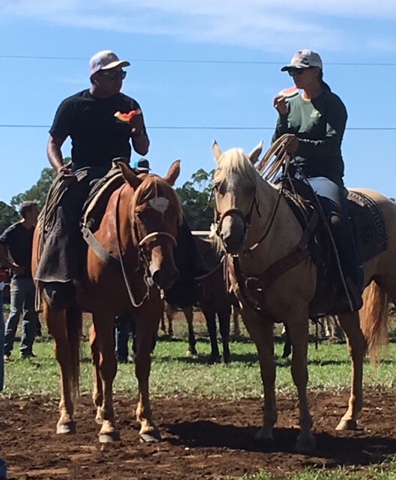 I had anticipated a branding event to be rowdy, upsetting, with lots of bawling calves. In actuality, it was a calm, low key event with very little bawling except from calves actually being branded. Once released, those calves stopped bawling. Some limped for 2-3 minutes (yes, I timed it) while others didn't limp at all. Within 3-4 minutes the calves acted fairly normal, awaiting the gate to be opened so that they could go join their moms. The cowboys waited to open the gate until all the calves in a group were not only done, but also calm and recovered. They watched them for several minutes before returning them to the herd.
The whole event was run smoothly, and I again emphasize, calmly. The only glitch I saw was when two calves, at different times, broke away from their restraints. But again, no cowboy style hot-dogging. The calves were allowed to join up with other calves and calm down. Then a horse & rider slowly entered the group of calves, noosing the errant calf and taking it to the nearest work station.
Bravo!!!!!!!! A job well done. At the end, all the calves were returned to the herd and given time to hook up with their moms. Once most of the calves had sorted things out, the herd was released back into the pastures. You would have thought that these cattle would have high tailed it as far away as possible. But no. They hung around. The Cowboys actually had to push them away from the work corral and urge them back to the grazing area.
344 calves were done, equipment packed away, and horses tended, all before lunchtime. There were some 60-70 people who worked together to get this job done, all volunteers, some coming from other ranches up to a 3 hour drive away. Their reward? In the future, other ranchers will come to help them with their own branding events. Plus at lunchtime the host ranch presented a great lunch (roast beef and plenty of side dishes & desserts), plus a fun raffle of numerous cowboy oriented items. I could see that these people all knew one another, worked well together, and enjoyed one another's company.
What a wonderful experience.....as long as I'm not the calf, that is.
So before someone asks, why brand them instead of using just an ear tag? The terrain on an Hawaiian ranch is rough. Thus ear tags can get ripped off and lost. So if the cow breaks through the fencing and leaves the ranch, its ownership can be determined by its brand. Ok you say, why not use a microchip? A microchip isn't visible. One needs to use a scanner, handheld, to read the chip. Ever try to get near enough to a beef cow on pasture to try to read a microchip with a small handheld device? I don't want to try that, but if you're game, just let somebody know where your health insurance card and notorized will are before you give it a try. Oh you say, just get better fences. Really? I haven't seen a fence yet that can keep in 100% of all cows. No rancher wants its cattle to get out, but in real life, it sometimes happens. Thus cattle need easy to see identification. A brand does that.
Posted by Su Ba at 11:49 PM