Back last November, I learned a very important lesson ...... Don't piss off a donkey !
Well, my old ram, E-Ram, is just now learning the same lesson. While feeding the flock their hay cube treats, E-Ram got it into his head for some reason that Dink wasn't going to be allowed to get her share of the cubes. He repeatedly maneuvered to block her way to the trough. I didn't think much of it, figuring that E-Ram would soon tire of the game, start munching on the cubes, then Dink could easily move in, as usual. Well.....not this time around.
The whole time I was occupied cleaning up manure and filling the water buckets, E-Ram and Dink danced around the feed trough. Must have been going on for close to ten minutes. Suddenly E-Ram attacked, ramming Dink in the belly and lining up for another charge, which was not to be. Dink had enough of these shenanigans, returning with her own charge. Luckily she meant no physical harm, dishing out just a mental intimidation lashing. She drove E-Ram all over the pasture, eventually putting him up against the fence and in the weak cover of a few ferns. She then proceeded to stand guard, not allowing him to leave his spot for close to an hour. 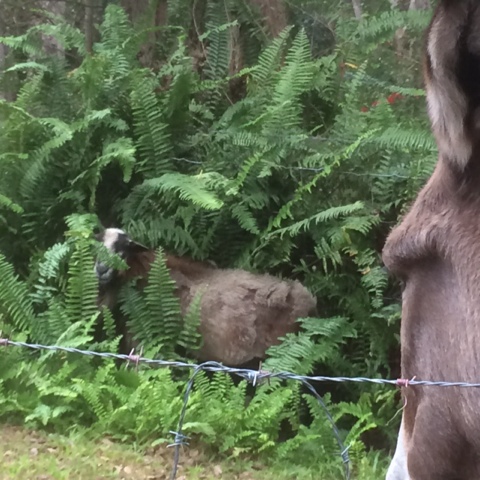 That was one pissed of donkey! She'd rather punish that ram than go eat hay cubes. She'd slowly wonder off, heading in the direction of the hay cubes, and E-Ram would attempt to sneak away. Back would come Dink, in full threatening charge. She wasn't happy until she had E-Ram right back in the same spot along the fence. You talk about a good herding animal! Dink was as good as any Border Collie I've ever seen!
When I was done my chores and not wishing things to escalate, I opened one of the gates allowing everybody access to one of the other pasture paddocks. It instantly took everybody's mind off the drama. ........ Lesson learned.
ps- Three days later, all is well. No more confrontation. But E-Ram is showing Dink a lot more respect.
Posted by Su Ba at 3:50 PM

Email ThisBlogThis!Share to TwitterShare to FacebookShare to Pinterest
Labels: Donkeys