Here's the floor plan of our funky little house. It's totally nothing like we've ever lived in before. Surely not you're conventional 3 bedroom home! Ok, first of all it's only one bedroom. But we found that's a great asset when you're living in Hawaii. All your relatives and friends, even ones that you didn't know you had, start wanting to visit. So unless you like running a free B&B for your brother's friend's cousin's nephew's neighbor, a one bedroom house comes in rather handy.

When we bought the unfinished place,the bedroom was a separate building with two roofed lanais (porches) -- the red lined ones. The black line one we added. A walkway connected it to the bathroom/living room building. We enclosed the walkway and lanai, making a wide hallway. Gee, it's so much more pleasant going to the bathroom at 3 a.m. without being soaked with wind blown rain. Hubby, being your typical guy, considered it an advantage to be able to walk out the bedroom door and pee over the porch railing into the flower bed. Enclosing the lanai ended that shortcut. I preferred the idea of keeping dry. And it made the place one building instead of two. 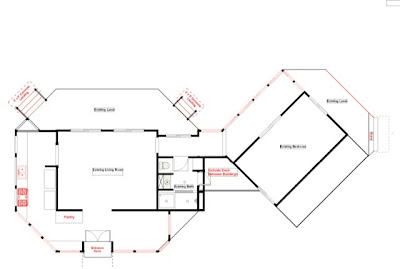 The bathroom is the future plan. Right now it's a simple toilet, sink, shower with the rest of the space being storage.

The living room use to have a frig, range, and sink along the left wall. We took those out when we finished the room, moving them to the lanai, them opening up the wall for a door to the new kitchen. We added stairs coming off the lanai since it was a nuisense having to walk through the house everytime you wanted to exit or enter the lanai. The front door use to be right off the livingroom, leading to the wrap around lanai. We moved the door out, enclosed the lanai on the left to make a kitchen, the lanai at the bottom to make a pantry to the left of the front door and a small room (office? Sewing or craft room? Guest bedroom...heaven forbid!) to the right.

Enclosing the lanais greatly increased the living space of the house. And being that everything is still under the original roof, it didn't change the official square footage for tax purposes. Thus it was simple to upgrade the permit without having to jump through hoops again.

We've been thinking of semi-closing in the lanai off the living room, basically screening it in. That would be a task once everything else is done with the house.

I'd like to enclose the bedroom new lanai (black lines), making it a hugh walk in closet-storage space. Of  course we'd have to cut in doors from the bedroom. But for now were using that lanai as our construction work area for the various saws, sanders, planer, and router.

Someday I'll have this house finished. It's getting there.
Posted by Su Ba at 10:29 AM

Email ThisBlogThis!Share to TwitterShare to FacebookShare to Pinterest
Labels: House