Down by the community garden site, we erected a shade tarp arrangement to use as a lunch area for the garden volunteers. Nice shade. Decent windbreak. Keeps the rain off. The only problem was that the ground sloped badly, and it was the most level spot available outside of the garden itself. No place else to put it. For months we've been putting up with sitting on a slant and holding into your plate of food so that it didn't roll of the table. After much procrastination I finally did something about it. 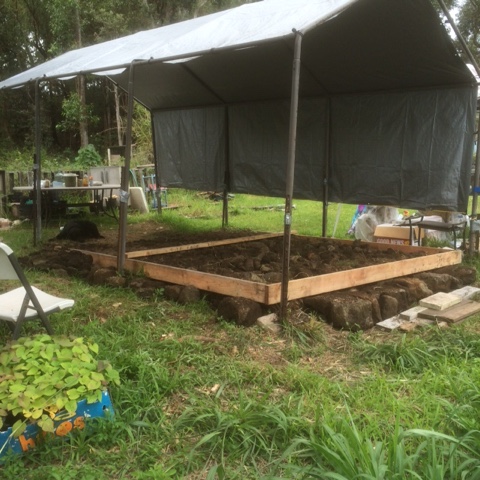 Regretfully I didn't take before photos. Nope, one afternoon I just dived into working on it, totally forgetting about the camera. Oh well. So you'll have to use your imagination and see the lunch area under the tarp tent and envision the salt shaker rolling of the edge of the table.
I started out by using some recycled 2x6 boards to frame out the area that needed leveling. The back 6 foot or so was level enough, so I dig the 2x6s into the ground where it started to slope and leveled them from that point on. Once I got them fairly level, I then started filling in the low area with fill. Chunks of sod that I ripped up while getting the rocks. Rocks. Lots of rocks. I had no problem finding rocks, for sure, but getting them there took time. Trip after trip with the wheelbarrow, moving rocks. 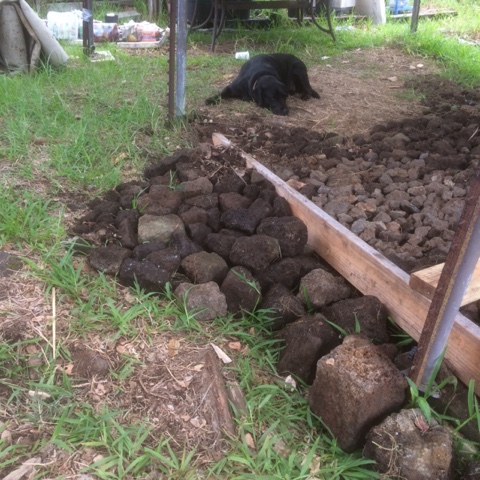 Crusty, the farm dog, started out being my faithful companion escorting me on each wheelbarrow trip. But after the first dozen trips each day, he got bored. He decided he could best supervise by finding a comfy spot under the tent to lay down and watch. He's lucky I didn't throw a harness in him and make him pull the cart. Lucky for him I had no harness! 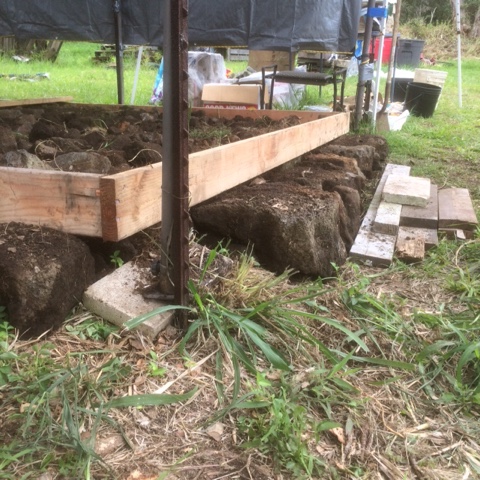 Back to the job..... For the first layers of rock I dragged over all the biggest rocks I could find. That actually filed the hole in pretty fast although it was a lot of work to haul some of those big babies over. Ah, good exercise. 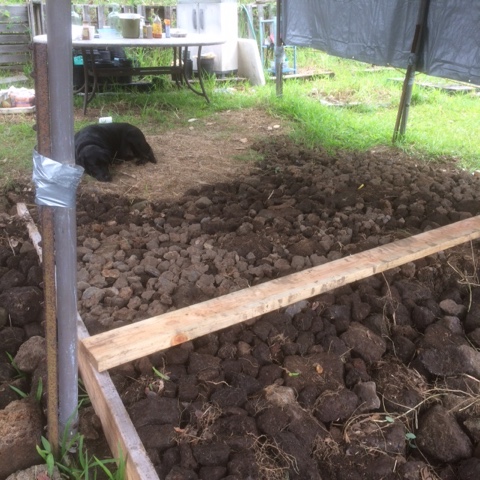 After the majority of the fill was in I switched to using smaller rocks, then smaller still. When I started adding the smallest rocks I laid a board across the width of the space, resting it atop the 2x6s. That way I could level out the surface without having big dips or stones sticking up too high. The photo above shows that the area with the smaller stones (towards Crusty) is getting nicely filed in and level, while the front area is still quite coarse and needs lots of small fill (photo below). 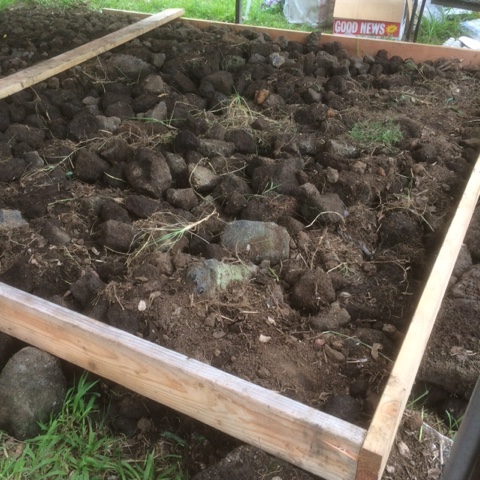 It took many hours over the course of several days to fill it all in. Hauling and placing rocks was not only work and tiring, it was something far worse.... it was boring. I'd rather be exhausted every day than bored one. 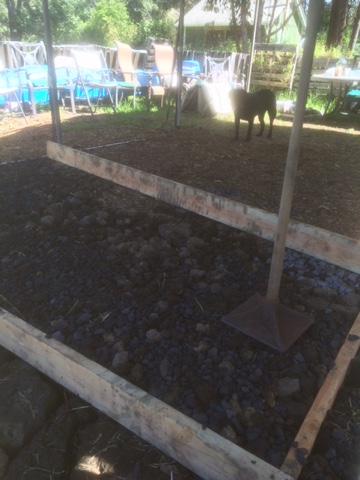 Once I got a section level, I tamped it down using a metal tamper. It really helped settle the rocks into place and pointed out any rocks that weren't stable. Once well pounded, I used lots of tree chipping to cover the whole area. Oh yeah, I forgot to mention. I also filed in with rocks to slope the sides.  In the next photos, in almost done. I still have the front slope to fill in and a bit of the sides. 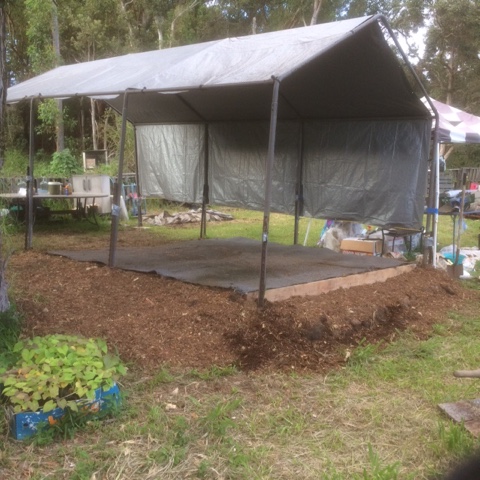 Once I finishedvwith the tree chippings, I replaced the carpeting. 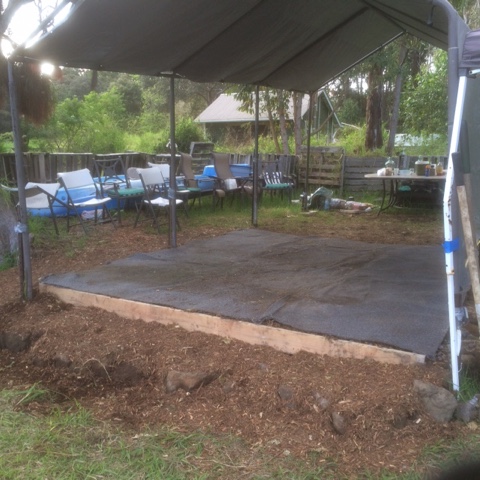 I think out turned out just fine, if I do say so myself. Once the garden volunteers arrive, the tables, chairs, and storage cabinets will go back in. Things will be ready for lunch once again! Then over the next few days I'll finish sloping the sides.
Now before everyone tells me so, yes it could have been so much faster by pouring a concrete slab. Or by building a framework and covering it with plywood. Or hiring somebody to do it for me. But that's not what my homestead is all about. It's about using resources supplied by the farm, and doing it myself when I can. The rocks and dirt were here. The tree chippings were here. The carpeting was already here (and it was donated rather than getting thrown away into the dump.) My labor was here, and heaven knows, I might have lost a pound out two in the process (I can only hope). My cash outlay was zero. That's cheaper than paying for concrete, lumber, or labor. So there's a lot of things I can get without spending cash by just being hardheaded, stubborn, and willing to put the time and labor into it.
Posted by Su Ba at 6:37 PM