An experiment............ How much effect would a high nitrogen mulch have on pipinola compared to a low nitrogen mulch?
Answer .......... A significant difference.
A few months ago I planted pipinola in an unimproved, shady area that I call "The Valley". It's part of the dry riverbed (once upon a time water flowed here when it rained uphill) that bisects my property. I planted pipinolas fairly evenly spaced over a good section of the area. I guess I put in about three dozen all told. The soil was totally untouched. Rocks were not removed. No soil amendments were applied prior to planting. But the area had been aggressively weedwacked once a month for three months in arow, so most of the weeds were pretty much gone from the real shady areas.
Over the course of the next few weeks it rained here several times a week, getting the ground fairly moist. It gave the pipinolas a good start with most of them sprouting, though some rotted. I then decided to apply a light mulch, about 1" thick, to help preserve that soil moisture. I would have preferred a 2"-3" thick mulch but I didn't have enough material for that. But I did have some fresh chicken pen litter, so I used it on one section until it ran out. For the rest of the area, I used forest leaf litter.
Now several months later, I can see a big difference in the pipinola plants. The area that got the chicken pen litter has larger leaves, plenty of vines, and long runners already. The plants have filled out the area, covering the ground. (photo below) 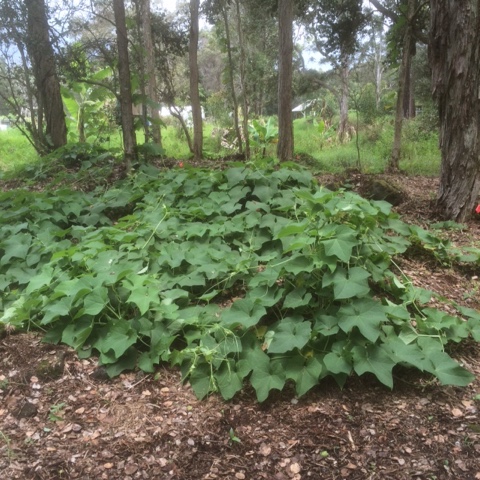 The areas where I used forest leaf litter is quite different. The leaf litter worked to keep the ground moist and the weeds at bay. But the pipinola plants were decidedly not as robust. Yes, they were green and growing. But they had far fewer vines, smaller leaves, and there was lots of ground showing between the vines. (photo below) 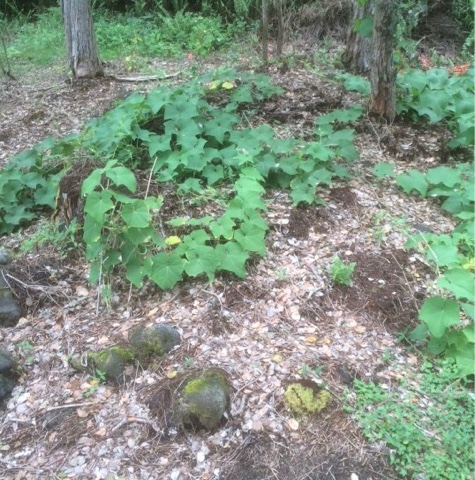 Below, you can see that the two areas at side by side. The conditions are almost equal....except for the type of mulch. 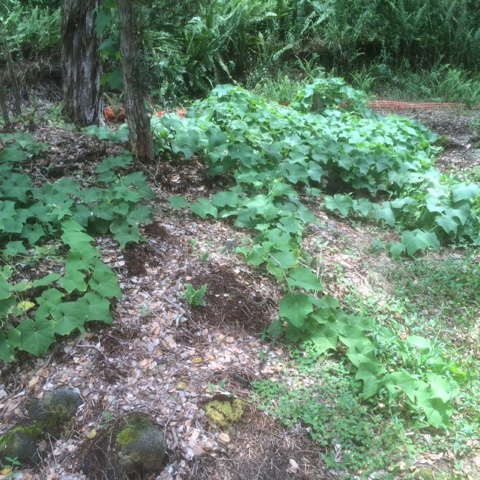 I like the results of this experiment for a few reasons. First, it shows that a good mulch can be quite effective. Not the answer to trump all other answers for starting a garden, but an effective way to start improving soil in a new growing area.
Second, it shows that fresh chicken manure, used sparingly,  can be successfully used. The emphasis would be on "sparingly". I've always been told that chicken manure had to be composted or aged before using. Mandatory....no discussion allowed. Fresh, it would burn the plants. Ah-ha, that isn't necessarily true.
Third, it shows that not all soil amendments need to be tilled in to have a beneficial effect. This is important for me, with my rock filled ground. I'm getting more confident that at least some of my starter crops, those where I'm not harvesting roots like with potatoes, can be grown using a high nutrient mulch. I don't know how effective this method would be on other crops, but the pipinolas surely like it.
As I bring more unused areas into crop growing, I plan to try other high nutrient mulches on various starter crops. What would the results look like using rabbit or horse manure instead of chicken? The chicken litter is based upon grass clippings, so what if I used ground up ferns or leaf litter in place of the grass in the chicken pens? What other starter crops would this method work well with? Sweet potatoes? Taro? Pumpkins? Gourds? Beans?
Time will tell. Oooooooo lookee, there is plenty of opportunity for more experiments!
Posted by Su Ba at 9:47 PM

Email ThisBlogThis!Share to TwitterShare to FacebookShare to Pinterest
Labels: Mulch