Crusty is one of the farm dogs. We're guessing he's about 8-9 years old, but we really don't know. He wandered in as an adult dog several years ago.
Two weeks ago we noticed a growth atop one of the toes on his hind foot. I was planning on attending a spay/neuter clinic in a week, so I figured I'd take him along and nick off the little lump. But once we had him under anesthesia, closer investigation revealed a second lump deep in the pad. Rather than take a chance, I opted to have the toe removed.
Good old Crusty is now a three-toed-dawg.........(sounds like there's a country western song in there some place). 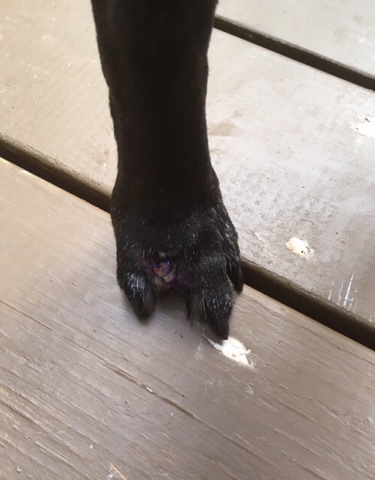 He's doing just fine. Other than being annoyed with the stitches, he acts normal. He's even frisking with Noodles and Spotz. 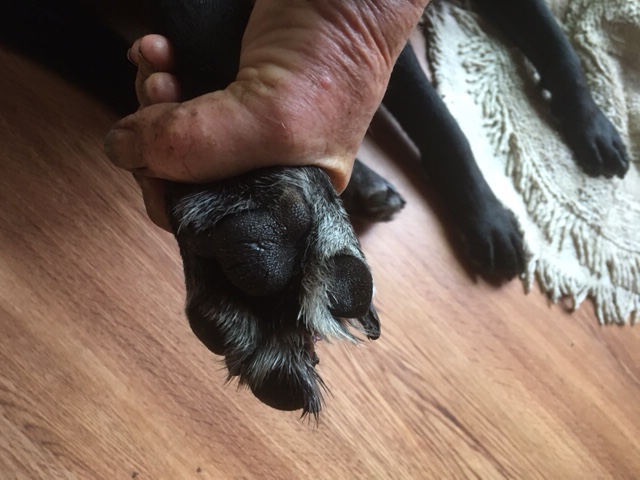 Even though he's missing one toe pad, it hasn't affected his walking and general gait. He runs up the hillside stairs, jumps up into hubby's lap, does all his normal things. I find it amazing and humbling that they simply get on with life. Gee, if it had been me I'd be limping around for sure, even if it was just to garner a bit of sympathy.
Posted by Su Ba at 6:20 PM