As part of my livestock plan, I want to have a shade shelter back in the main pasture. Not that the animals need the shade (there's plenty of shade trees), but it would give them a dry spot out of the rain. And rather than making it a three sided shelter, like I would have done if I were back in NJ, I figure on leaving it open for air. We're in the tropics here, so the air is more important.
Not having done something like this before, I checked out various shed plans and garden project plans in my books and on the Internet. I then inspected a friend's pasture sunshade to see how his was built, since it's weathered many a windstorm successfully.
This is what I settled upon....... 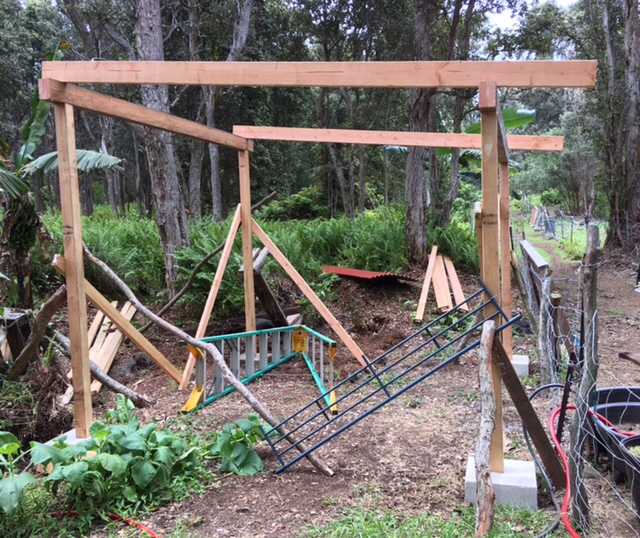 This is my prototype, being built outside the pastures, by the pasture gate. I plan to use it to store various livestock supplies that I want to keep handy. And when I go out of town, I can stack the bags of haycubes there so that the caretaker can easily feed the sheep. I find this to the most difficult stage in building anything, getting everything started, leveled, and braced. Yup, there's some very interesting items being used to brace the frame, but of course they're only temporary and happened to be handy. 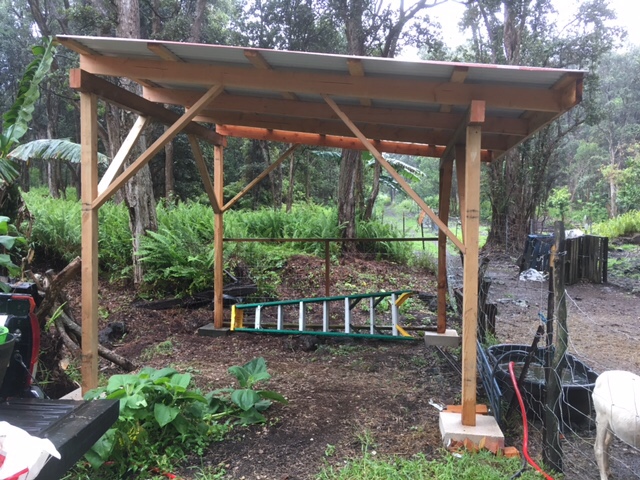 Before the full day of labor is over, the "shade tent' is basically done, I'm minus one sheet of metal roofing, which will have to be purchased. Oops.....miscalculated! And one fascia board still needs to be put into place, but it's raining now. 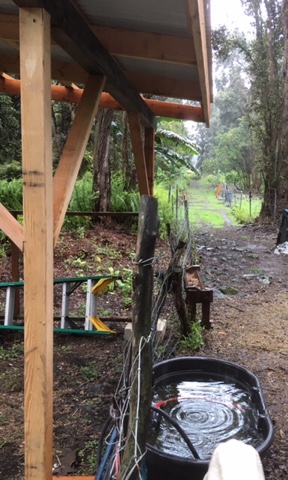 I had originally planned to install rain gutter on the lower end of the roof in order to catch rainwater and direct it to the water troughs. But no need. It rained late afternoon and instantly self-filled the trough below. How cool is that! I'll just drag over the second water trough and let it self full too. Looks like I'll only need to use the water hose during extended dry periods.
Posted by Su Ba at 3:58 PM