Last week it was both rainy and windy. What a combination. Sheesh. Not being able to work on the farm, I went to spend a bit of time visiting a friend down by South Point. I was puzzled by all the small, dried up worms on her roofed over lanai. When I asked, she said that it had rained worms. Egads! 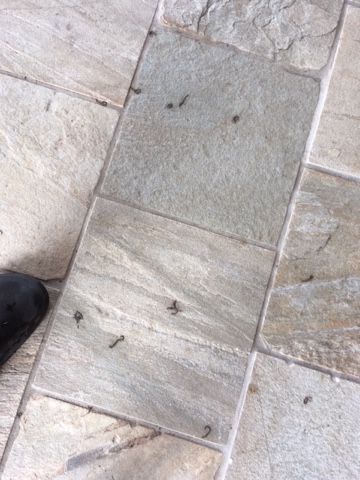 (Looking down onto the stone floor. The black thing on the left is the toe of my shoe.)
Apparently it happened the night it was both raining and blowing. As the rain blew in under the roofed lanai, it brought with it tiny worms.....which later dried up and died when the sun came up. How odd! Sounds like one of those biblical plagues. 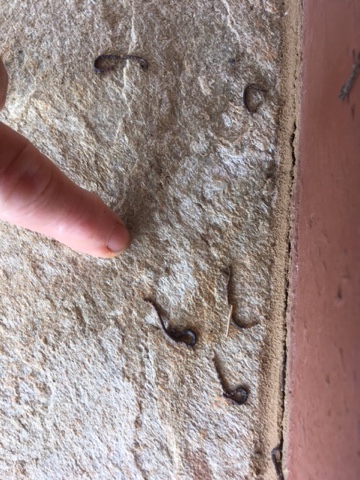 I took a closer look, and they are indeed dead worms.
The only thing I can figure is that these worms had crawled up the stems of the various plants growing near the porch. When the winds kicked in, the worms were literally carried away on the wind and deposited several feet away from their bushy perches. I'm sure the vast majority safely landed on the lawn, to crawl away and live another day. The luckless ones landed on the stone porch.
Yes, the winds down around South Point can really be strong. And the constant wet we've been having has caused the worms to be quite active at night. I notice when I've  harvested bananas lately that there are dozens of worms way up at the top of the trees, hiding down in the notch of the leaf stem. Yup, worms have been crawling 15'-20' up the tall banana trees. Amazing little critters.
Posted by Su Ba at 10:58 PM