As though I don't already have enough projects, I've been spending some time recently working on the dry hill that is near the top of my driveway. It's an area that was just molasses grass and ferns. After grazing the sheep through a few times, it became just ferns. Even the livestock won't eat that stuff.
So here's what the hill was covered in.....solid ferns >>> 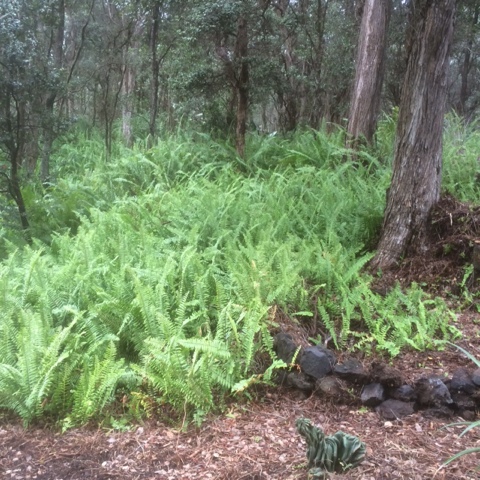 While the ferns are pretty and they prevent erosion, I wanted to have the area be more beneficially productive. I wanted it to produce something edible for the livestock. I have plenty of areas for human food, so I'm looking at livestock fodder for here. But if course, it's not below me to eat some of the animal fodder crops myself! Hey, a bean is a bean, a sweet potato us a sweet potato.
Step one -- weedwack down the ferns. Hand pulling them was too time consuming, although I did yank some when I needed material to fill a grow box. The weedwacker was so much faster. I wacked those ferns down, then rewacked them about two months later. Another two months later the ferns are regrowing but they are spindly and thinner. One more good weedwacking and a good portion of the ferns are conquered. Below......one final wacking to do. This time I dig deeper with the wacker, thus keeping most of the ferns from quickly regrowing.>>> 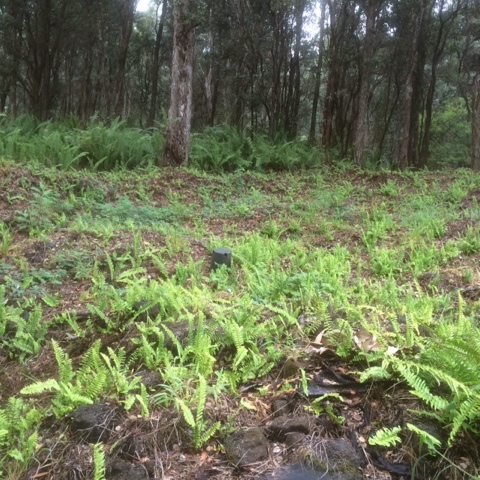 Next step I wanted to do was re-do the rockwall along the driveway here. Years ago I had piled up some rocks but never made them look like a real wall. So I spent a few hours tidying them up. >>> 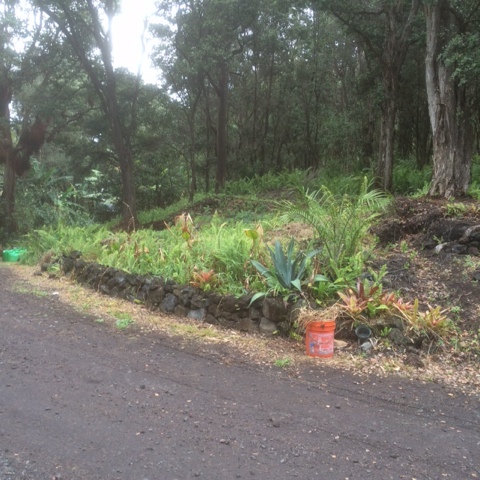 Over the past several weeks I've been carting excess rocks in order to create terraces on this hill. Nothing fancy, just simple low walls. Below, I just started this area.>>> 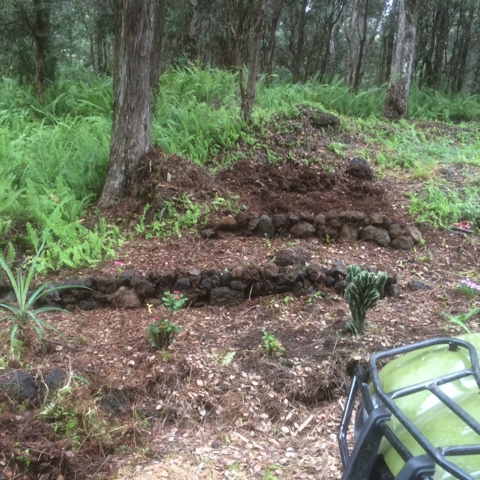 Over in another section I had created the terraces a couple months ago. I then planted sweet potatoes and extra ornamentals that I had - some succulents and bromeliads, and on the top terrace, garlic chives.>>> From this early start, pictured above, I've already started harvesting some of the sweet potato greens to feed to the livestock. And the goat relishes the garlic chives. Crazy goat! I'm pretty happy with the way this terraces is turning out.
I figure thus project will take another month or two to complete. I plan to be growing perennials : sweet potatoes, chives, moringa, bananas, Okinawan spinach, New Zealand spinach. Plus various annual type plants to provide greenery : beans, peas, corn, oats, kale, and more. Although most of what will be grown will be livestock fodder, it will be a pretty growing area, pleasing to the eye. And it will produce a lot more livestock feed than the original molasses grass & ferns ever did.
What have I got planted so far? Two areas of sweet potatoes, two beds of green beans, a short row of garlic chives, two moringa trees, three banana trees, one bed of taro. That's a start.
Posted by Su Ba at 7:42 PM