Our electrical shed (it houses the solar system controls and some of the panels are mounted on its roof) has an elderly metal roof. The previous property owner built it out of salvaged materials, and although the building itself is holding up quite well, the metal roof has succumbed to the vog. Over the past few years we have been patching spots as they appear, but the acid rain has been eating away at the channels. Last week one of the cats was up on the roof and it's weight punched numerous new holes. Oh my, time to replace the roof.

If we didn't have the solar panels mounted on the roof, changing the metal would have been a fairly straight forward job. But alas, things don't go all that simple for us. We made the poor choice (in hindsight) of putting the panels on the roof, something that everyone and everybody said to do. Now I'm wondering why? Why do they have to be on the roof? Now that the roof needs replacing, we have to remove the panels. A simple afternoon job is now going to take days plus disrupt our electricity. Hmmm, we have to think about this.

We initially thought we could simply disconnect the solar rack, move it over a couple feet out of the way while we removed the old roof panel a slid the new one in place. Wrong! The stainless steel screws used to make the rack were all very badly corroded. Not simply corroded, some were crumbling. The entire rack was in danger of coming apart. Next, many of the screws holding to roof panels in place were impossible to back out. They too were in bad shape. This was looking more and more like a big job. 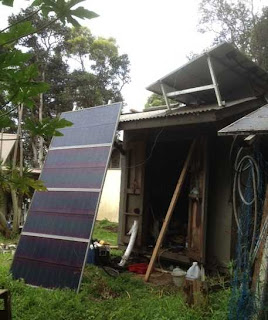 Well, the solar panels and rack simply needed to be dismantled and totally removed from the roof. So we ended up spending half the day getting that done, being very careful not to damage the solar panels themselves. We salvaged all the aluminum angle so that we could use it again. Of course, the electrical wiring needed to be disconnected. All the stainless steel screws were beyond reusing. So on day #1 we took care of one solar rack and we have to look forward to repeating this process tomorrow with rack #2. Gee...so much fun.

Next we removed half the old roof, having to use a sawsall to cut off the roofing screws. Once the old roof was off, it was simple to lay on the new panels and screw them into place. This took no time at all, so it seemed.

With the shed roof now half done, and our arms too tired to tackle the second rack, we turned our thoughts to a ground rack for the solar panels. Looking around, the most logical spot to put it would be right where our Costco storage "shed" was located. Ok then, empty the shed, disconnect it from the lumber foundation, pick it up and move it over 15 feet. Since it was only the two of us, picking it up wasn't exactly what we did. We sort of walked it to its new location, moving each of its six vertical posts (we called them legs) a few inches at time. But in no time it shuffled over 15 feet. Once pegged down in place, all the stuff we emptyed out had to go back in. Boy, it was a long afternoon!
Posted by Su Ba at 4:21 PM